The standards, aspiration and innovation of Singapore public housing

What do we want from our public housing? And more importantly, what do we—as consumers and citizens—need from it? The answers are evolving with institutional and private-sector innovation.

Positioning oneself ideologically in Singapore’s powerful public housing universe can seem as puzzling as rationalising its fit in a competitive real estate market. The Housing and Development Board (HDB), which turns 60 last year, is unusual among public housing providers globally in terms of its vast reach. Despite (or perhaps thanks to) that reach, ‘affordability’ remains a key concept in the HDB’s mission statement – sitting right beside ‘quality’. Yet perceptions of these terms have surely changed over the decades, as have the nature of our public housing estates and our expectations of them.

There’s been an incredible leap from the HDB’s earliest problem-solving days of low-cost modern housing in the 1960s, to today’s heartland pride, BTO (Built To Order)-prompted marriages, amped-up interior renovation industry and million-dollar flat resale prices. Singapore’s public housing has defined aspects of culture, environment and economy while itself being in a perpetual state of becoming – influencing and being shaped by bigger shifts in the national development agenda, and evolutions in the zeitgeist.

“Public housing in Singapore is a great social leveller. But that also creates a challenge for the HDB. How do they place themselves in this market?” queries architect Pearl Chee, Senior Associate at WOHA, the firm behind two of the most notable HDB developments: Skyville @ Dawson, designed with landscape architect ICN Design International (completed 2015), and the mixed-use Kampung Admiralty, designed with landscape architect Ramboll Studio Dreiseitl (completed in 2017). The latter of these – demonstrative as a blue-green-oriented, biodiversity-rich tapestry of public spaces, amenities and housing – won the enviable title of ‘World Building of the Year’ at the World Architecture Festival in 2018. 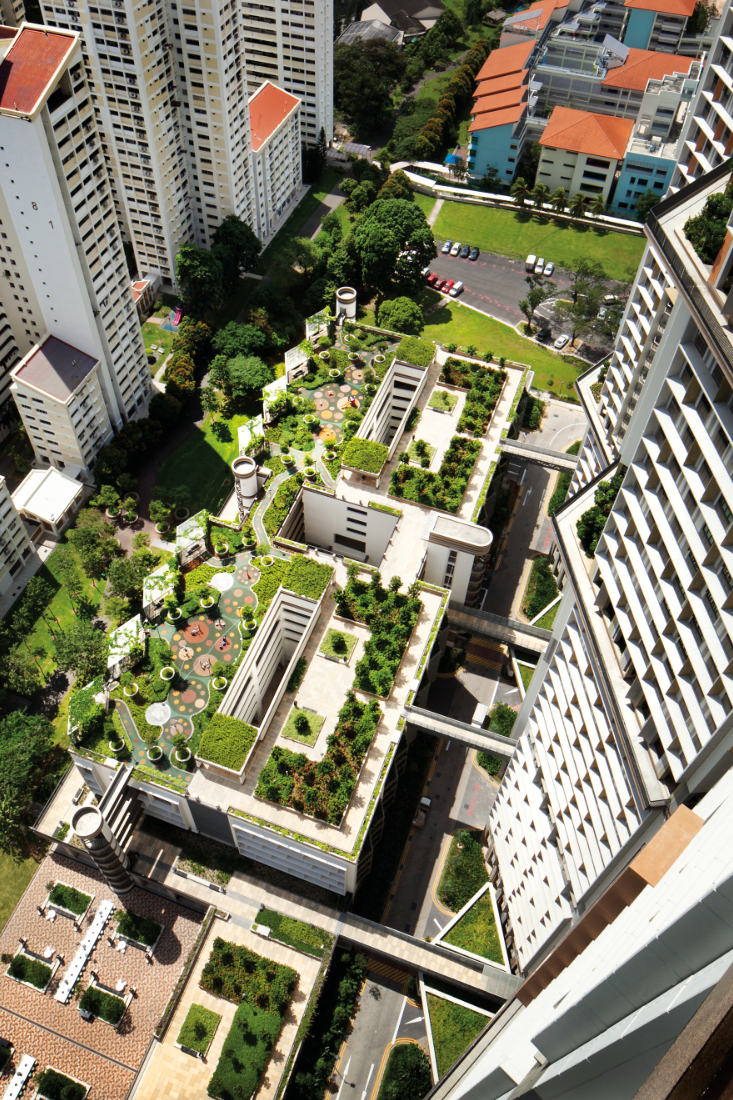 Rooftop gardens sit atop the podiums at Skyville @ Dawson by WOHA and ICN Design International. Landscape covers 50 per cent of all roof areas in the project, and provides amenity throughout the towers in sky gardens. Photo by Patrick Bingham-Hall.

Related: Normalising The Radical With WOHA

“We are very happy to design housing for a state,” says Manuel Der Hagopian, Partner at G8A, which has collaborated on the design of two completed HDB developments to date: Punggol Waterway Terraces with Aedas and ICN Design International (completed in 2015), and GreenRidges in Tampines with LAUD Architects and ICN Design International for landscape (completed 2019). “There are very few places left in the world where the primary agenda is not only the market,” he says. But even so, there are constantly evolving expectations among buyers.

As Dr Eunice Seng wrote of the newest entrants to the HDB housing market in the 2017 book Singapore’s Vanished Public Housing Estates, “The endeavour of improvement pervades in the millennial. Aspirational rather than problem-solving, new housing estates take on greater ecological concerns and increasing expectations of highly mobile residents.” The optimistic social agenda of modernist architecture lingers unusually in Singapore’s public housing while also contorting to changing social preferences (for more domestic privacy, for example), local political agendas, rising aspirations and market influence. Architects (internal and external to the HDB) have a key role in navigating the complex mix of considerations, prodding at guidelines even as they are evolving.

Beyond the self-checking machinery of the state, private architects began having a role to play in the design of public housing in 1991 after Tan Cheng Bock (then Chairman of the Government Parliamentary Committee for National Development) proposed to parliament that fresh creative input was needed for HDB estates, which he said lacked identity and character. The Design and Build Scheme was thus introduced in May 1991, followed by Design Plus in 1996 and the Design Build and Sell Scheme in 2005. 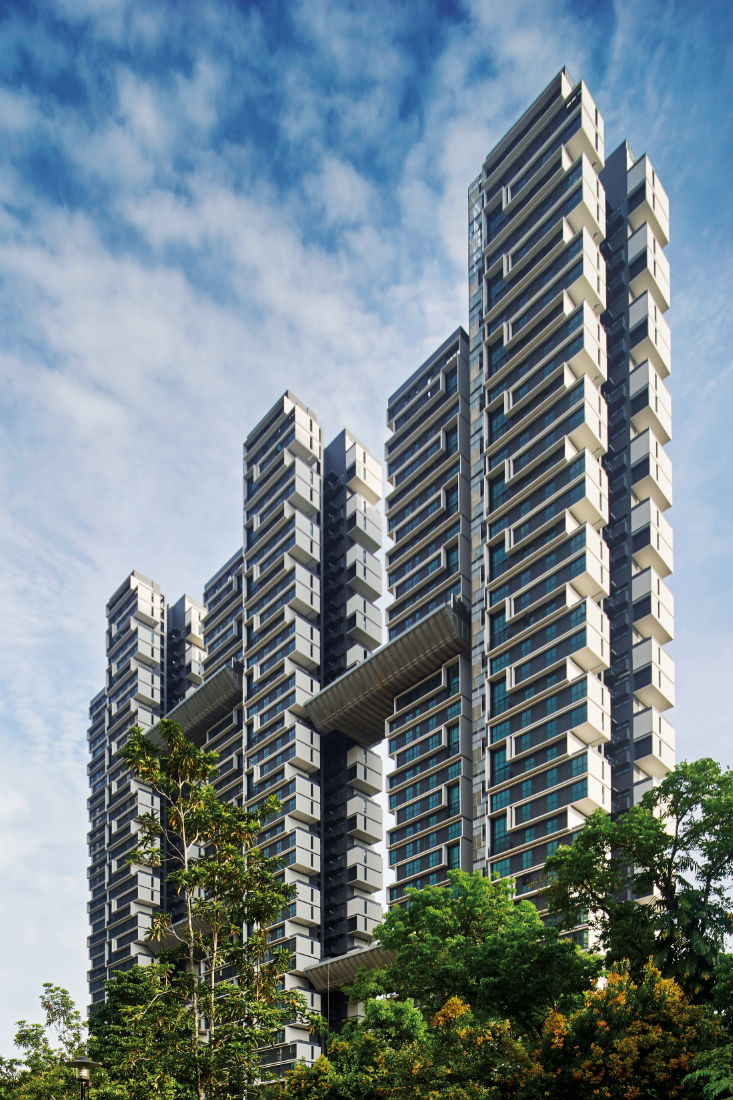 The idea of multi-generational living was a key driver for SCDA at Skyterrace @ Dawson. The spatial framework allows extended families to occupy interconnected loft units. Photo by Aaron Pocock.

But it was with the Urban Redevelopment Authority’s (URA’s) international competition for new housing at Duxton Plain in 2001 that a significantly different future was first imagined for public housing. We entered an era of destination sky parks, dazzling heights and new perceptions of density.

Today the majority of HDB projects are outsourced, but HDB continues to play a leading role in the master planning of estates. A much greater focus on urban design has been implemented in the last decade, with the social and green-blue potentials of public space brought to the fore. The HDB’s Biophilic Town Framework is now being applied to new housing projects with the recognition that the provision of holistically considered green spaces and urban greenery is essential to creating a quality living environment for residents. Additionally, the HDB Green Towns Programme was launched in March 2020.

Related: HDB Will Launch The First Housing District In Tengah With Farm Features

The HDB typically engages architects and planners through a ‘Quality Fee Method’ of procurement, in which the quality of the design proposal and consultant team are taken into consideration in addition to the fee proposal. Developments such as Kampung Admiralty, GreenRidges, and housing parcels at Bidadari by MKPL Architects and landscape architect ICN Design International (currently undergoing completion) are examples. 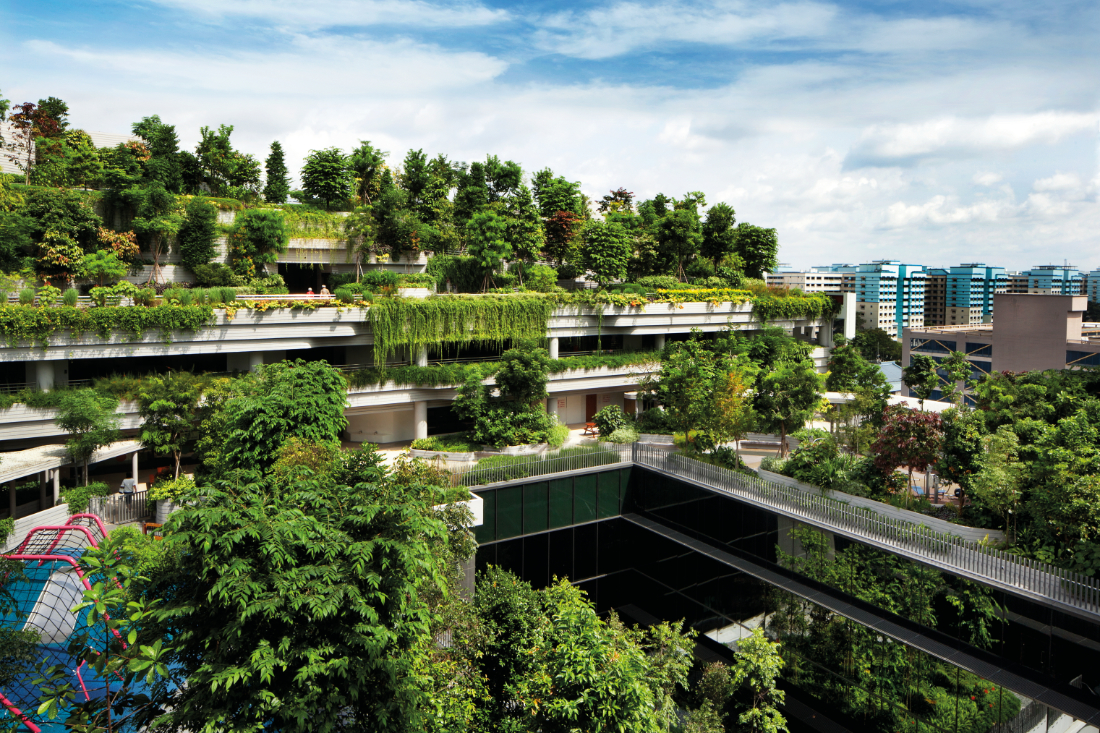 A limited number of design competitions have also been introduced by the HDB, such as the international contest that precipitated Waterway Terraces, and the competition to master plan Bidadari estate. The latter, which was won by MKPL Architects and Urban Strategies Inc., developed a garden setting and established what Siew Man Kok (Principal, MKPL Architects) describes as “a paradigm shift in public housing whereby residents live right within a park.”

Private architects have also been invited by the HDB to design for particular projects – for example, the “new-generation public housing” at SkyVille@Dawson by WOHA and SkyTerrace @ Dawson by SCDA (completed in 2016). These projects introduced various opportunities for social interaction in garden settings at height and ground level, and also explored different unit typologies – flexible internal layouts at SkyVille, and paired units for multi-generational living at SkyTerrace.

“I hope to see some of the key ideas that were pioneered at SkyTerrace @ Dawson … become the new norm for public housing in Singapore,” says Soo Chan, Founding Principal and Design Director of SCDA. To date, some of the planning ideas tested in the Dawson projects have been implemented by the HDB in new projects at Bidadari, Punggol Northshore and Tampines North.

No matter how they are engaged, architects are required to adhere to strict design guidelines and requirements for cost effectiveness. Nevertheless, as the projects mentioned (and others) indicate, opportunities for design innovation have repeatedly been found. 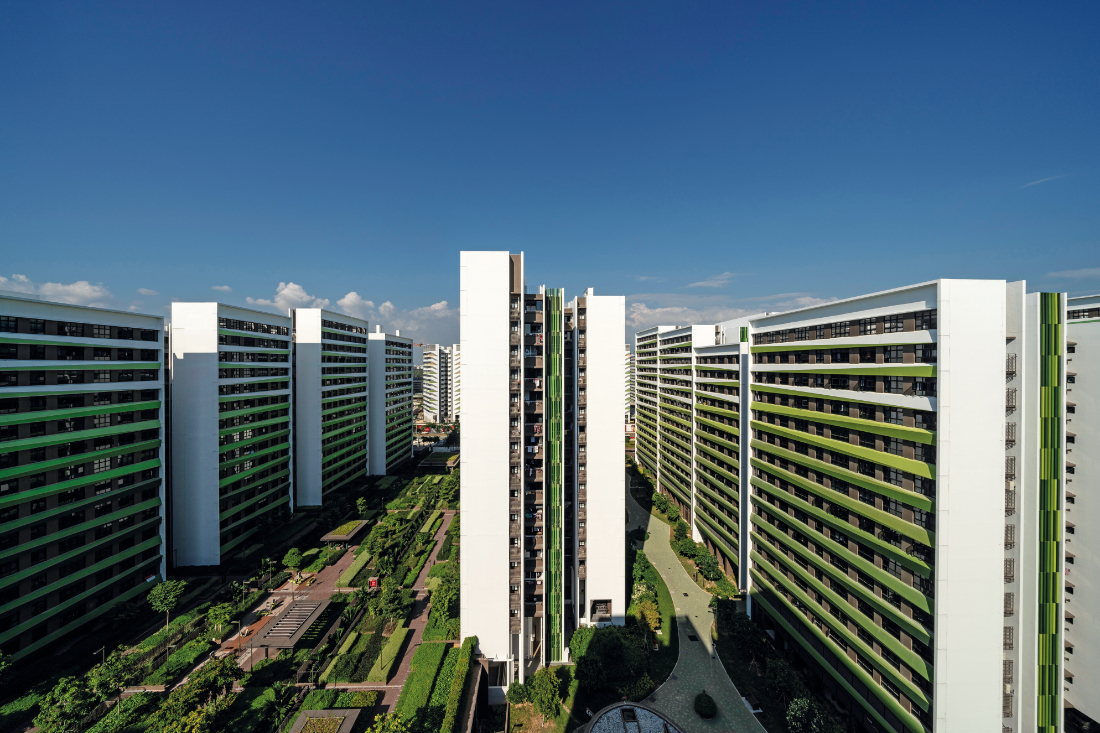 GreenRidges, by G8A and LAUD Architects with ICN Design International for landscape, was conceived as a slice of nature nestled within the urban fabric of Singapore. Photo by Darren Soh.

Finding the space for innovation

Reflects Chee, “At SkyVille @ Dawson, we purposely worked within the system to deliver productivity, structural efficiency and cost effectiveness. But we created high amenity within the high density, bringing sky gardens to the high-rise blocks and creating community spaces in proportion to the density, which was new.” She adds, “The semi-outdoor spaces we created within the building itself are probably something people need more now with COVID-19.” Equally relevant to the pandemic conditions and the shift to working from home would be the column- and beam-free unit layouts that allow for flexibility in the division of space.

At Punggol Waterway Terraces, a matrix of planning strategies (including double-loaded, no-dead-ends corridors) was used by G8A and Aedas to provide passive climatic control, cross ventilation and shading from the sun, while maximizing, through a cascading profile, the orientation of the apartments towards the waterway. Der Hagopian refers to the project as “a genuine precursor to the zero-energy mass housing that will be essential for the continued growth of Asia’s cities.” 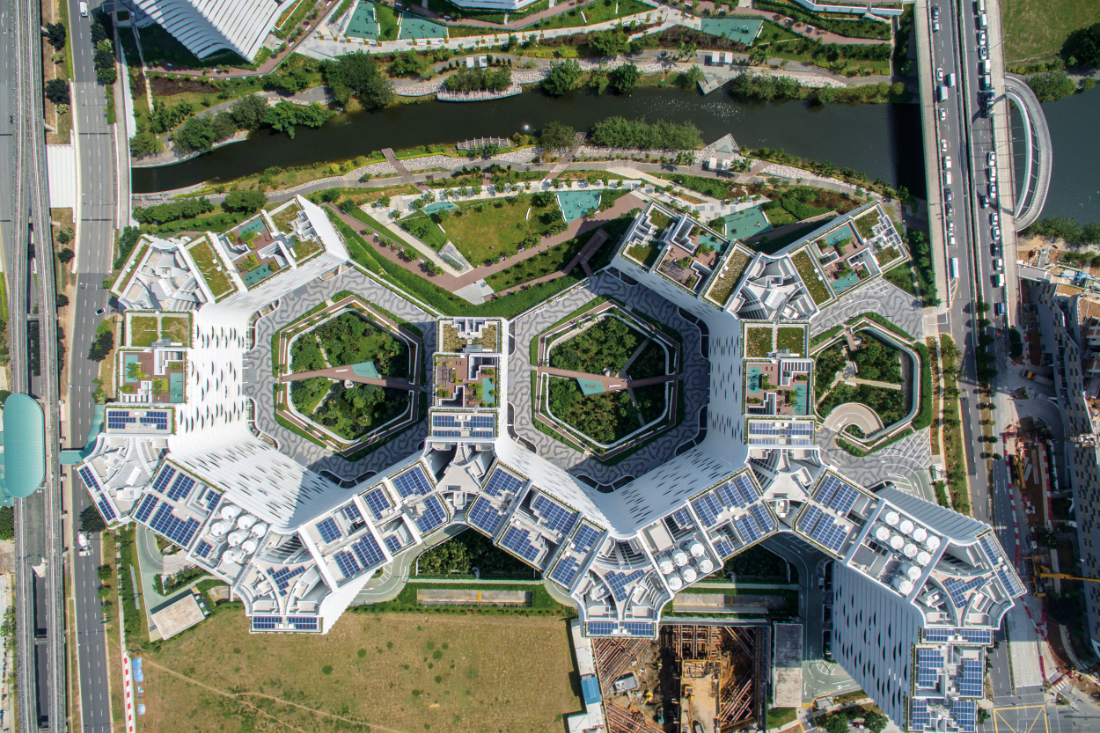 With hexagonal plans, the ‘arms’ of Punggol Waterway Terraces (by G8A and AEDAS with ICN Design International) step down to the waterway so all residents have a direct experiential connection with the landscape and neighbourhood. Photo by Darren Soh.

At GreenRidges, the focus is on the relationship between the green area (the landscaped deck atop the two-storey car park and the ground level gardens) and the units. An intimate connection was made possible by the placement of the fire-access driveway within the car park, rather than as a separating element as is typically seen, and by restricting the height of the car park to two storeys. “We work a lot on the typology and what’s between the unit blocks. That’s where there’s still a lot to say,” says Der Hagopian.

“Public housing in Singapore is a great social leveller. But that also creates a challenge for the HDB. How do they place themselves in this market?”

With its housing parcels at Bidadari, MKPL also pushed for a reduction of car park height and an emphasis on human-scale experiences – such as in landscaped courts, links and decks that form a hierarchy of public spaces and offer purposefully designed pedestrian routes. With the reintroduction of ground-level units, MKPL hopes to see active ‘street life’ return to the HDB environment. 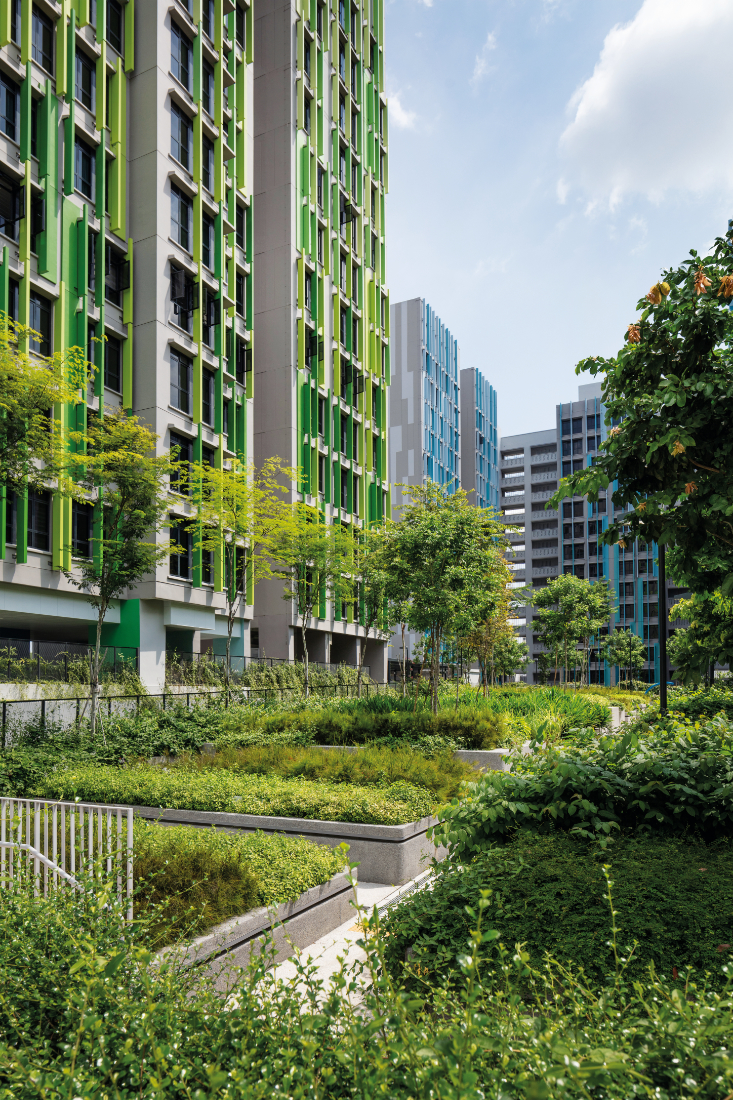 The master planning process for Bidadari Estate involved a leap forward in terms of multiple-agency collaboration (HDB, NParks, Public Utilities Board, URA and Land Transport Authority) across traditional territorial demarcations to achieve the vision of a community living right within a park. Siew cites the HDB’s CEO Dr Cheong Koon Hean as being instrumental in forging an administrative pathway through this matter.

The HDB’s focus on creating a better human experience of shared spaces in HDB estates, especially through biophilic means, is admirable. This points to the emergent broader perspective on design for wellbeing – of the environment and all its species and systems, not just humans. Shifts in this direction are necessary for sustainability, resilience, and generally better outcomes. And with its capacity to shape considerable areas of the island with an accessible ground plane, the HDB is well positioned to lead in the creation of high-quality public environments.

Should the acquisition and upkeep of blue-green, amenity-rich and healthy living environments cost buyers and owners more? Policy will decide that.

With just days left until our final entry deadline