Almost two centuries ago, Friedrich Fröbel founded the kindergarten approach as a reflection of his belief that children should be nurtured like plants in a garden. Early childhood education (ECE) has since gained increasing awareness in terms of research and public policy, developing into diverse pedagogical branches.

Design, once pedestrian, is assuming a more integral role in the conceptualisation of ECE “hardware”. In fact, the absence of professional design in Singapore’s preschool spaces has long been critiqued by Lekker Architects, culminating in their 2014 study A Different Class which was commissioned by the Lien Foundation. The purpose of the study is explained in the report: “… 200 new preschools will be built in the upcoming years and locations for each will need to be found. It is a critical window of opportunity to rethink the homes of our preschools and go beyond the cookie-cutter HDB void deck classroom.” 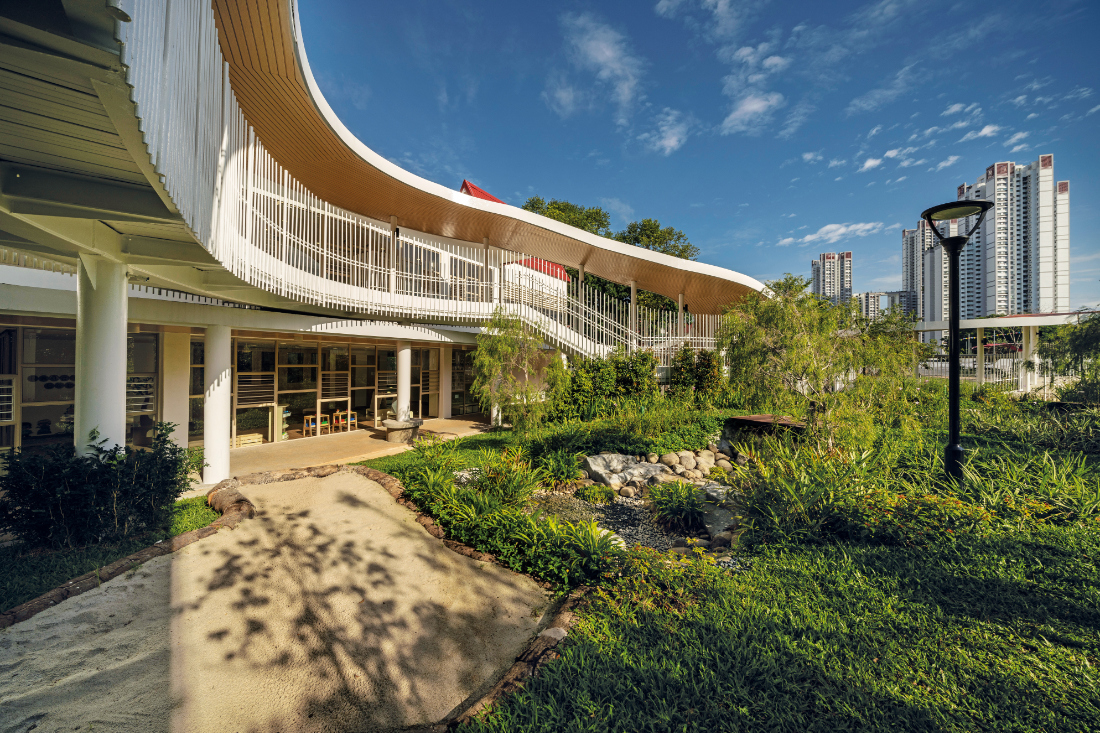 The ‘window of opportunity’ refers to the Singapore government’s review of its policies to raise ECE standards and facility quantity. One immediate outcome of this review beginning in 2012 is the establishment of the Early Childhood Development Agency (ECDA), under which a new “anchor-operator” scheme was launched. Crucially, the scheme introduced large-scale (about three to four times the capacity of regular preschools), purpose-built, and privately operated childcare centres in Singapore’s ECE landscape.

Freight Architects has been actively involved in the design of such ECDA regulated centres starting with the Yishun Large Childcare Centre (YLCC) in 2016. The practice says that the scheme is still work-in-progress and changes are being experimented and implemented incrementally. While YLCC introduced ideas such as the insertion of a community spice garden to connect the preschool with the neighbourhood, the project should be read as an early prototype in a series of trial projects where ideas are still being tested out by policymakers and stakeholders.

“The question on where to site these early testbed large-scale childcare centres involves public agencies such as ECDA, URA and NParks, etc. This multi-agency approach has yielded interesting architectural results such as the Sengkang Riverside Park Large Childcare Centre. But more importantly, these exploratory steps help to chart the direction of early childhood education in Singapore,” says Kee Jing Zhi, director of Freight Architects. 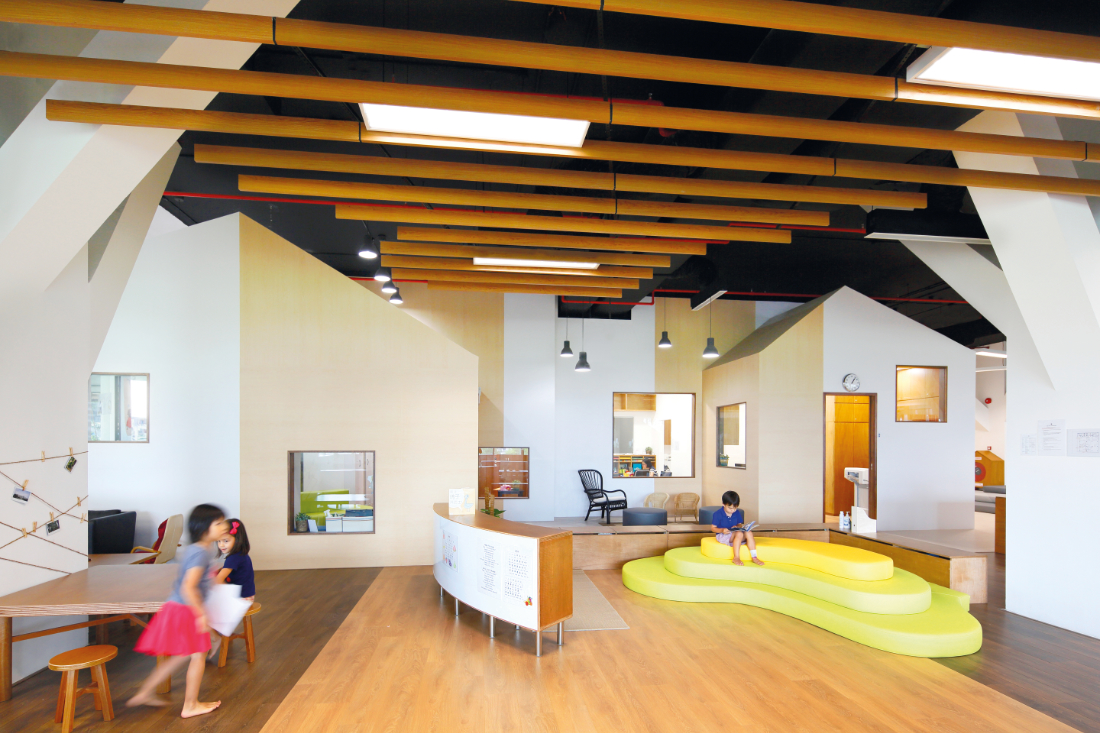 Instead of fixed clasrooms and elements for The Caterpillar’s Cove, Lekker Architects developed a kit-of-parts with different furniture, surfaces and containers to allow for flexibility. Photo by Darren Soh.

For Lekker Architects, while the anchor-operator scheme has yielded some interesting prototypes, the experience from the current pandemic calls for a reassessment of “megastructures and monopolies as a solution” and hopefully lead to “new experiments with more intimate mid-size schools that are creative in their design”.

“The relative novelty of designed spaces for children here means that the field is still bogged down by early-stage assumptions of what “works”. We find this very alien to the ways that children experience their environments, which are fluid and imaginative. Kids do not approach a space looking for the “right” answer; they are totally experimental in their outlook. They misuse everything and this is a sign of tremendous creativity,” says Joshua Comaroff, design consultant at Lekker Architects.

“Most adults…seem to telegraph to kids a highly positivist idea of facts, truth, correctness and right answers. Vagueness, adaptability, and openness to rethinking are actually more aligned with what allows children to be empowered and to succeed,” Comaroff continues. 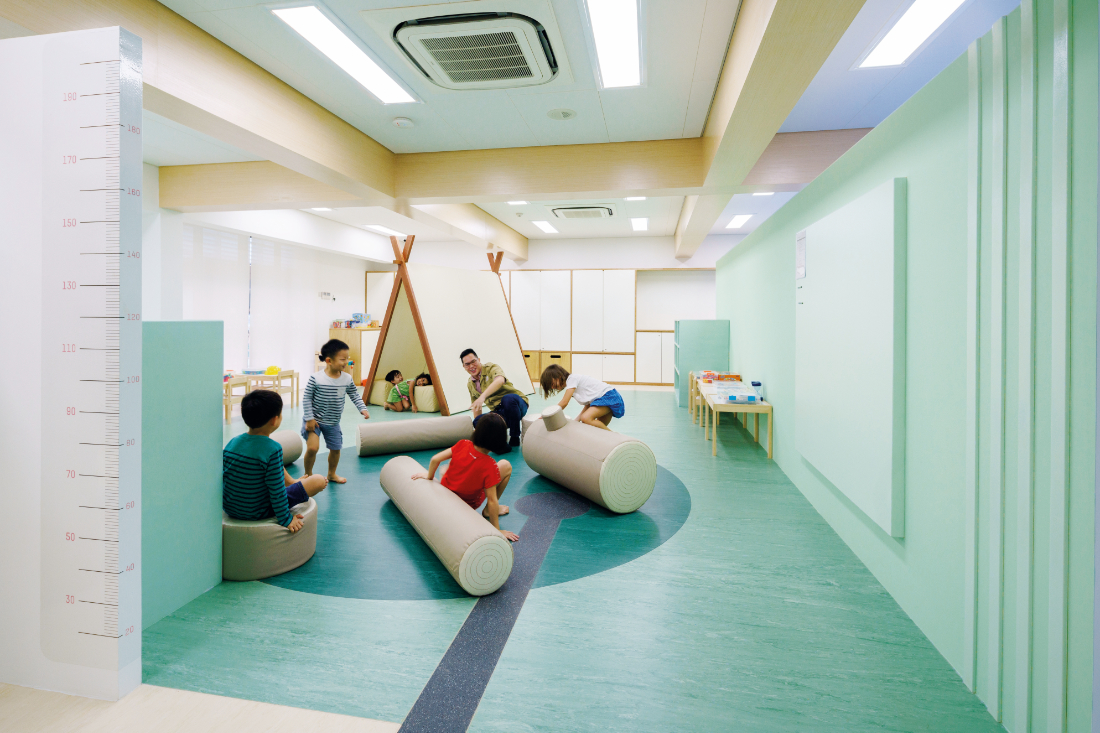 Kindle Garden is a preschool for children of diverse abilities and was designed by Lekker Architects to be inclusive in how its spaces cater to a wide range of needs. Photo by Darren Soh.

The Japanese ECE model has been studied by many countries, including Singapore. According to Hibino Sekkei, which has been designing ECE facilities under their subsidiary Youji no Shiro for over 20 years, the recent ECE development in Japan can be traced back to the bubble economy burst in the early 90s, when the large-scale transfer of public ECE facilities or their operation to the private sector was compelled by the drying up of public funds in municipal governments.

Private operators, who have freedom over the concept and philosophy of their schools, introduced an array of pedagogical approaches, particularly imported ones (Montessori, Reggio Emilia, etc.), largely in response to the need to differentiate themselves in a crowded market. The role of architecture has evolved as well, from simple renovation projects to increasingly complex briefs where architecture and design are integral to the conceptualisation process. 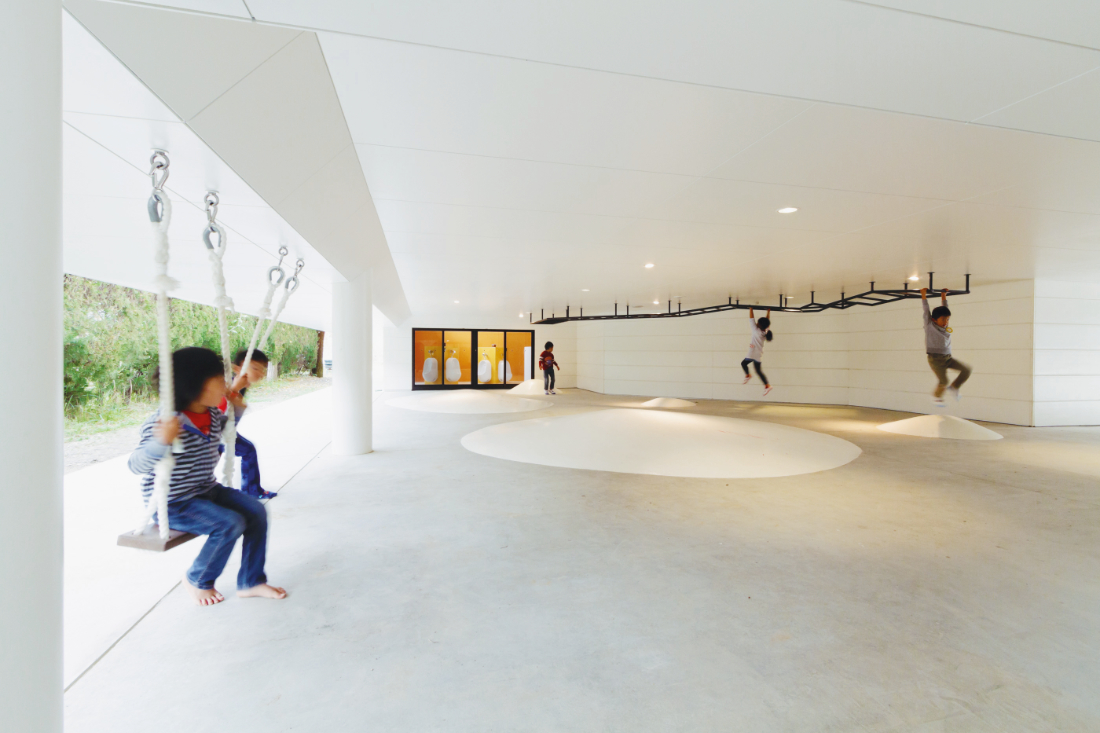 Hibino Sekkei’s AM Kindergarten and Nursery adopts principles from the practice’s eight-point design manifesto which includes keys such as using natural materials, the introduction of steps and undulating surfaces to encourage creative and physical activity and the avoidance of overprotecting the children. Photo by Studio Bauhaus, Ryuji Inoue.

With more than 500 preschool projects completed across Japan to date, Hibino Sekkei has distilled their design philosophy into an eight-point design manifesto. In addition to basic ideas such as keeping design simple, their work incorporates a variety of spatial scales and circulation methods to encourage activity and exploration. Vitally, the practice is critical of common design practices such as overthinking about safety (which hampers learning opportunities) and hiding backyard functions (toilets and kitchens etc).

“The most successful early childhood education projects are those that trust children to be able to be independent. This may result in many areas that might appear dangerous to some people, but are the kind of environment in which children are able to thrive and grow,” shares Taku Hibino, CEO of Hibino Sekkei.

Hibino Sekkei’s design principles, perhaps best captured in its AM Kindergarten and Nursery, can also be observed in the projects by Lekker Architects, which emphasises the use of abstract, open-ended forms to foster creative thinking, and Freight Architects, which adopts in-between spaces such as courtyards, corridors and landscape to support interaction and learning.

Going forward, declining birth rates is a significant issue that will influence the ECE development in Singapore and Japan. According to Hibino Sekkei, the situation in Japan is exacerbated by an ongoing increase in ECE projects to meet an urgent but short-term supply inadequacy despite the reality of depopulation. This means that the planned occupancies of pre-schools in Japan today could be reduced by more than half over the next couple of decades, which necessitates flexible and adaptable architectural design in terms of spatial and building services planning so that the buildings can respond to future changes.

Every school a good (design) opportunity

In Singapore, the population trend can be observed in the recent merging of schools. However, the vacated school buildings offer interesting opportunities in their adaptive reuse. Freight Architects’ Radin Mas Childcare Centre represents one such case study. Sited in the southern block of the former Henderson Secondary School, most of the existing building was left untouched. The architects focussed their intervention on the adjacent open space, inserting an undulating ramp loop which wraps around a biophilic playscape and connects to the second storey of the existing building which houses the main preschool programmes. 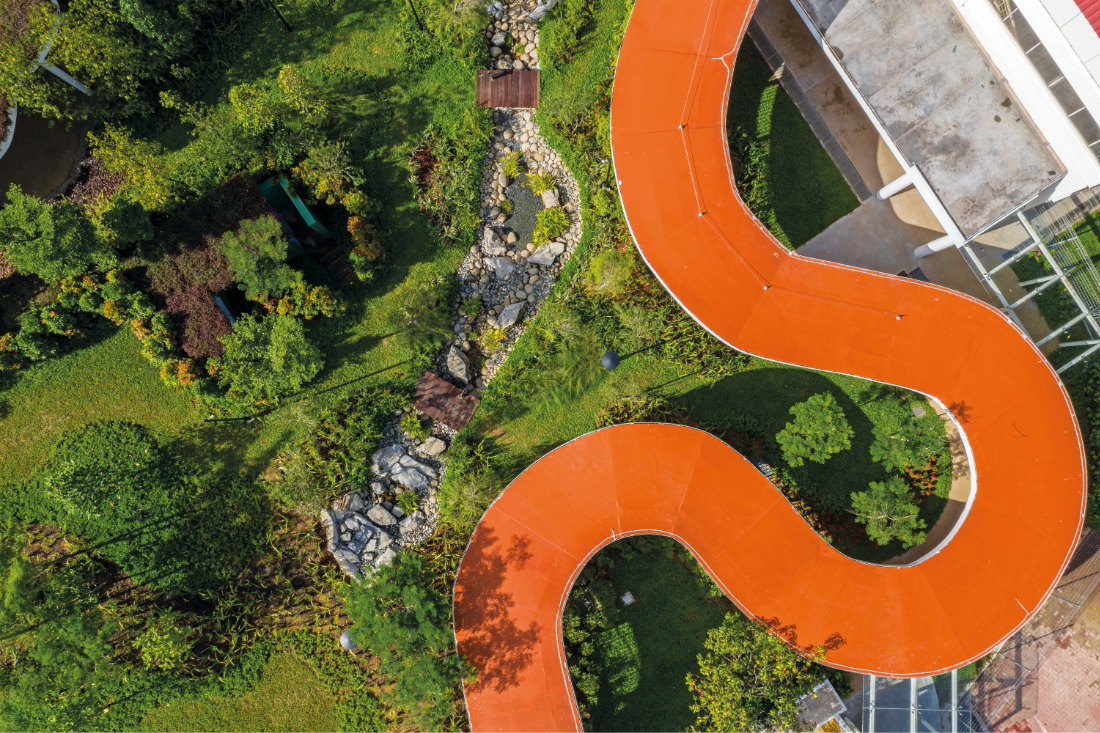 Despite the long-term challenges, the nascent discourse on ECE in Singapore needs to be deepened to touch fundamental issues such as parental mindset towards children, as well as broadened to engage overlooked societal issues such as inclusivity. The former refers to, as Lekker Architects shares, entrenched paradigms such as demand from parents for more “Primary 1 preparedness” over development of key character skills, which many ECE directors still grapple with.

To be sure, there are no formulas to follow here. Comaroff shares, “We’ve learned that it’s not a typology. There is a tendency to see design as solutionism—especially in early learning. Our various schools have taken rather contrasting typological approaches, mainly because the philosophies of their principals, directors, and teachers were quite distinct. At the same time, preschools are of different sizes, in different locations, and pursue very diverse pedagogies. While there are few things that we’ve learned to avoid, we don’t feel that there is any “secret sauce.” And this is good thing: if we felt that Caterpillar’s Cove had solved the problem of teaching young children, it would be a pretty good time to throw in the towel.”