Are We Entering an Age of Timber High-Rise Construction?

Will Asia Pacific choose sticks over stones to build its bones? We take a look at two projects in the region to find out where we place in the race to build high-rise buildings made of timber.

‘Plyscraper’ was one of the finalists in the 2016 edition of Macquarie Dictionary’s ‘Word of the Year’ poll. A portmanteau of plywood and skyscraper, the noun refers to high-rise structures built using, as described by the dictionary, “super-strong, engineered wood products, which are tough as steel or concrete”. It didn’t win (‘fake news’ and ‘halal snack pack’ did), but the typology continues to gain momentum worldwide, largely spearheaded by projects concentrated in Austria, Canada and the Scandinavian countries.

What about the Asia Pacific region? Singapore completed its first large-span MET (Mass Engineered Timber) building in April this year. Designed by Toyo Ito & Associates, Architects and Sembcorp, The Wave is NTU’s latest sports hall, which Features 72-metre-long Glulam (Glued Laminated Timber) arches and CLT (Cross-Laminated Timber) floor slabs. Both materials have been granted IPA (In-Principle Acceptance) by the BIP (Building Innovation Panel – an inter-agency authority which includes, among others, the BCA, HDB and URA). The BCA has even endorsed the materials on its website. “Productivity Impact: CLT and Glulam can contribute time and manpower savings up to 25 per cent at project level,” it says.

We have yet to see Singapore’s first built plyscraper, but we do have studies and research initiatives. One of the recent ones is the 2017 Capstone project by SUTD and design firm Weijenberg, which aimed to push the boundaries of timber structures by proposing an ambitious 80-storey residential plyscraper near the Marina Bay Financial Centre. “It’s quite a high threshold, which was precisely why we aimed for that number of floors,” says Weijenberg founder Camiel Weijenberg. He adds, “It’s a good way [to build] going forward because wood is dramatically better than steel and concrete.” 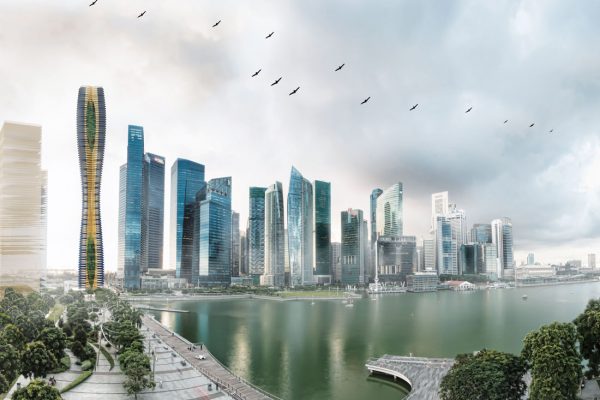 The use of digital simulations to test the required structural strength resulted in a four-layer nested tube core with a beam-and-strut system that binds the structure horizontally, and a timber facade diagrid layer that transmits wind loads inwards. Its projected energy consumption savings are equivalent to that of 1.8 million households, with carbon emission savings equal to that of 7.5 million trees.

There are plenty of issues to work on to justify actually building a timber structure on such a monumental scale. One of them is the volume of wood needed to construct it. Says Weijenberg, “We’ll explore the material in the next Capstone. We’ll see how we can make it stronger so we will need far less wood and make the construction more efficient.”

The nearest timber tower being built in the region is located in Brisbane, Australia. The latest in a series of timber towers from developer Lendlease, 25 King is a ten-storey commercial tower designed by Bates Smart. At 52 metres tall, it will be the tallest timber tower of its typology in the world when completed next year. 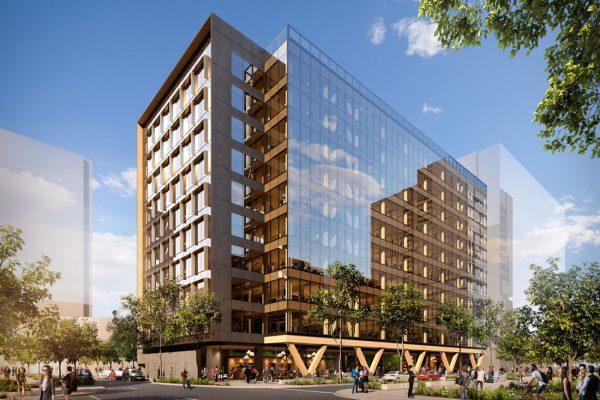 “The Asia Pacific region has a heritage of building traditional structures in timber. This craftsmanship could be transformed into CLT construction,” says Philip Vivian, a Director at Bates Smart and project leader of 25 King. “However, it may be challenging to build CLT buildings in Asia because most of the fabrication is done in factories located in Europe and North America. In Australia, this prefabrication reduces extensive on-site labour because the timber can be constructed quickly using a minimal crew. In Asia labour costs are already low, so the savings we experience in Australia are unlikely.”

Read the complete article in Cubes 89!