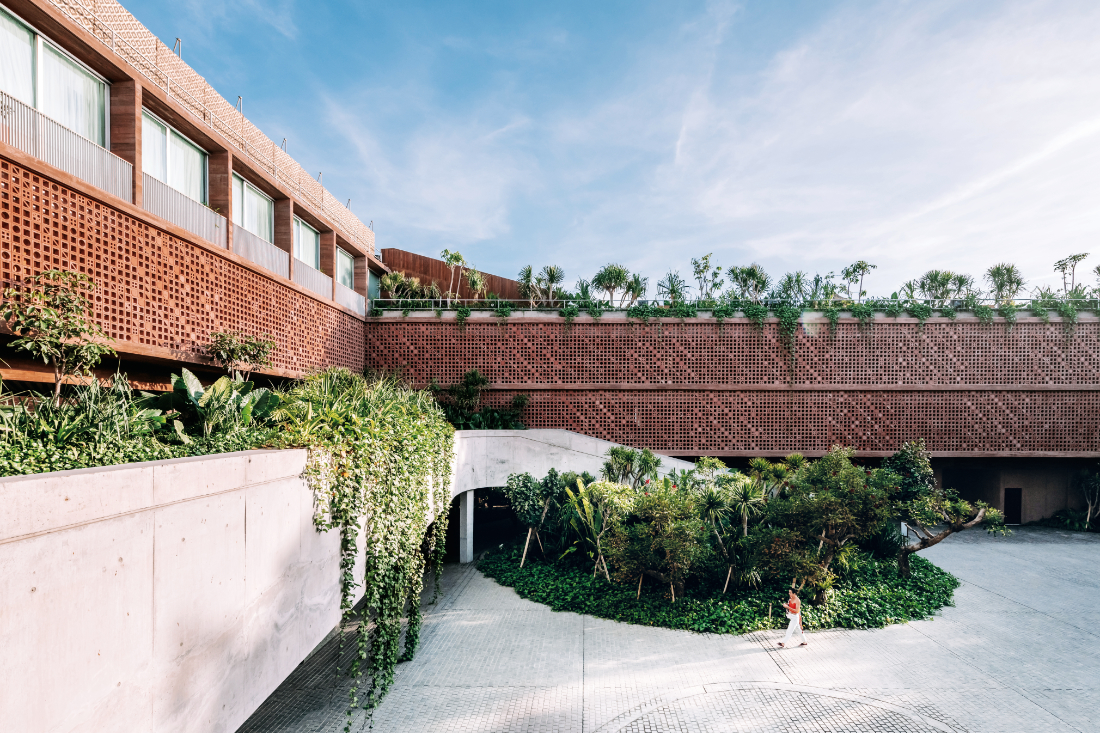 Sustainability is now part and parcel of good design and a priority consideration among the region’s architects and designers working on residential, commercial and public portfolios. But what about hospitality projects? Sustainability and hospitality do seem at odds with each other, making it inherently challenging to design a genuinely sustainable hotel, bar or restaurant. Rather than be a deterrent, this should necessitate a greater sense of urgency, particularly in light of the climate crisis.

Today, the harsh reality of climate change and global warming is underscored by a younger generation of consumers driving the demand for experiences, products and services that are as ethical as they are luxurious. So the expectation for hospitality operators to more seriously address issues of sustainability is also growing, especially in hotel design.

Indeed, the International Tourism Partnership (ITP) launched the Hotel Global Decarbonisation report in 2017 that shows hotels need to reduce their absolute carbon emissions by 66% by 2030 and by 90% by 2050 (against a 2010 baseline) to fully play their part in mitigating global warming. While larger hotel chains still have a way to go, smaller and more operationally agile hotels are taking the lead, as are individuals such as Bill Bensley, who is setting a furious pace for the planet’s sake. 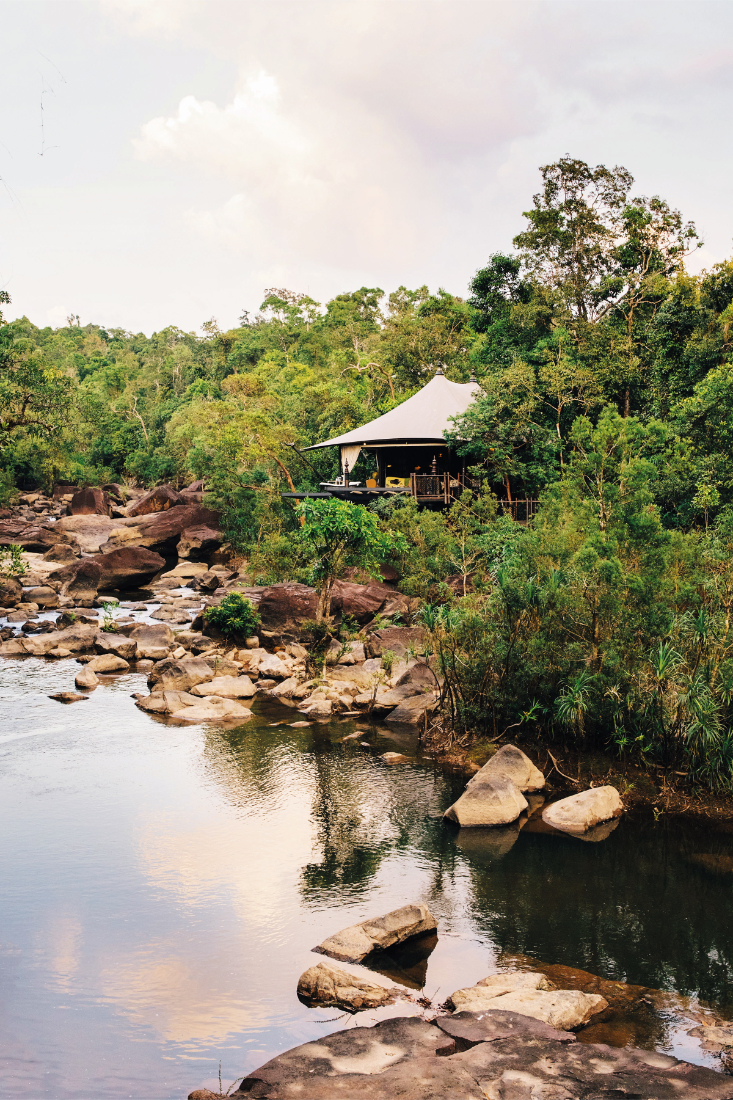 A ‘Waterfall Tent’ at Shinta Mani Wild in Cambodia, designed by Bill Bensley. It is one of 15 tents sited alongside 1.5 kilometres of river and waterfalls for minimal site impact. Photo by Elise Hassey

The California-born Bangkok-based architect has designed over 200 hotels globally and recently released the open-source whitepaper titled Sensible Sustainable Solutions. He’s unashamedly passionate about the environment, conservation and sustainability, and this paper consolidates his expertise with a view to informing and inspiring the hotel industry so that it can do better. “In the next five years, 15,000 new hotels will be built [worldwide] and for each of them, a hotel operations company will have a set of standards that they issue to architects. Surprisingly few of these standards specify statements or changes regarding sustainability,” he says. “I’m sharing something that I believe is low hanging fruit for hoteliers and operators, and it’s my dream that we can all positively impact our planet’s future by harvesting that fruit.”

Sensible Sustainable Solutions posits three touchstones in order to make this happen – build with a purpose, operate locally and create respectfully. Bensley’s proposal is holistic in that it encompasses environmental, social and economic sustainability – and the architect himself doesn’t just talk the talk, he walks the walk too.

The International Tourism Partnership (ITP) launched the Hotel Global Decarbonisation report in 2017 that shows hotels need to reduce their absolute carbon emissions by 66% by 2030 and by 90% by 2050 (against a 2010 baseline) to fully play their part in mitigating global warming. 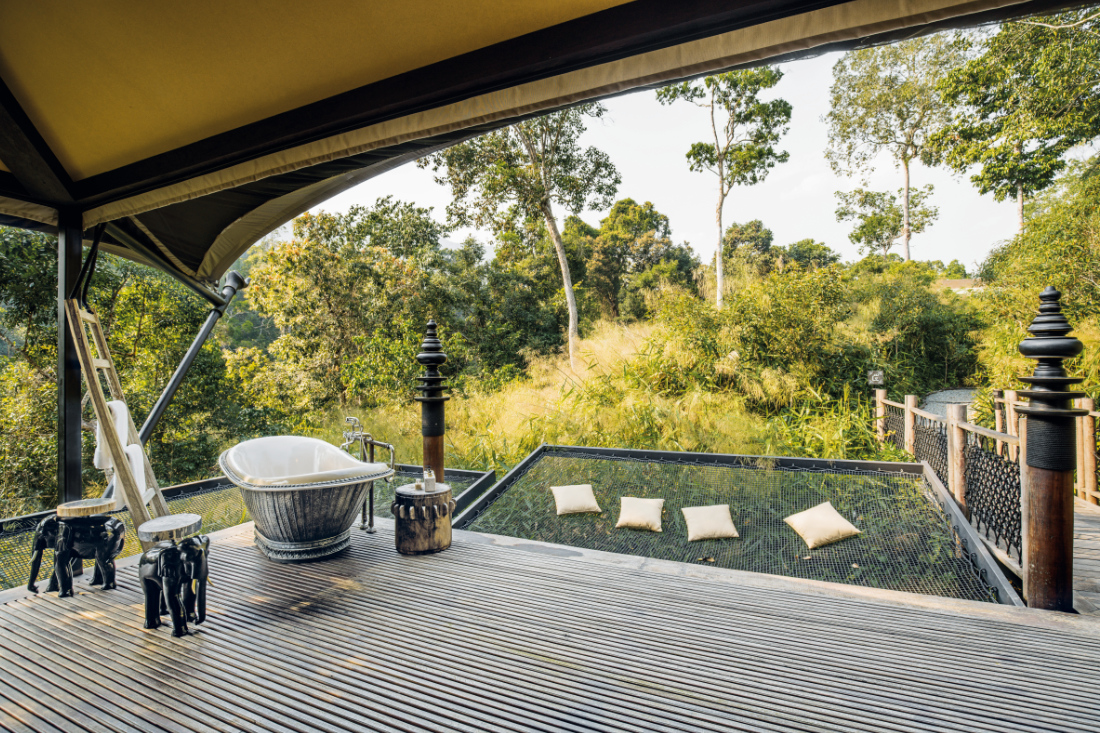 A view of a forest saved from logging, from a ‘Wild Tent’ at Shinta Mani Wild. Photo by Krishna Adithya.

Along with his business partner Sokoun Chanpreda, Bensley co-owns Shinta Mani Hotels (SMH) in Cambodia and is involved in the independent not-for-profit Shinta Mani Foundation, which Chanpreda established in 2011. Amongst other initiatives, the Foundation educates youth from disadvantaged backgrounds in hotel operations, and SMH supports it by offering them internships and positions at any one of its four hotels, essentially giving back to the community. Bensley’s social conscience is strong and with the recent opening of Shinta Mani Wild in South Cardamom National Park, he proves his commitment to environmental sustainability is just as compelling.

The site itself was purchased by Bensley and Chanpreda at a logging auction, which saved this lush pocket of land from deforestation. And the architect’s resulting design concept highlights the importance of addressing sustainability from the very beginning of the process, rather than incorporating token gestures at the end.

Bensley’s proposal is holistic in that it encompasses environmental, social and economic sustainability – and the architect himself doesn’t just talk the talk, he walks the walk too.

Comprising 15 private tents, Shinta Mani Wild advocates touching the earth lightly in order to conserve as much of the site’s untamed landscape as possible. As Bensley explains, “Minimal intervention is about respecting the land, getting to know its natural features and wanting to complement it, rather than just plonking down something new. And on wooded sites, a small architectural footprint that fits between the trees often works best, with what’s lost in floor space being gained in atmosphere and privacy.” So there’s only one tent per 66 acres of forest and not a single tree was cut down during Shinta Mani Wild’s construction. Bensley also took as much time as possible to prepare the site, ensuring the outcome was thoroughly considered. 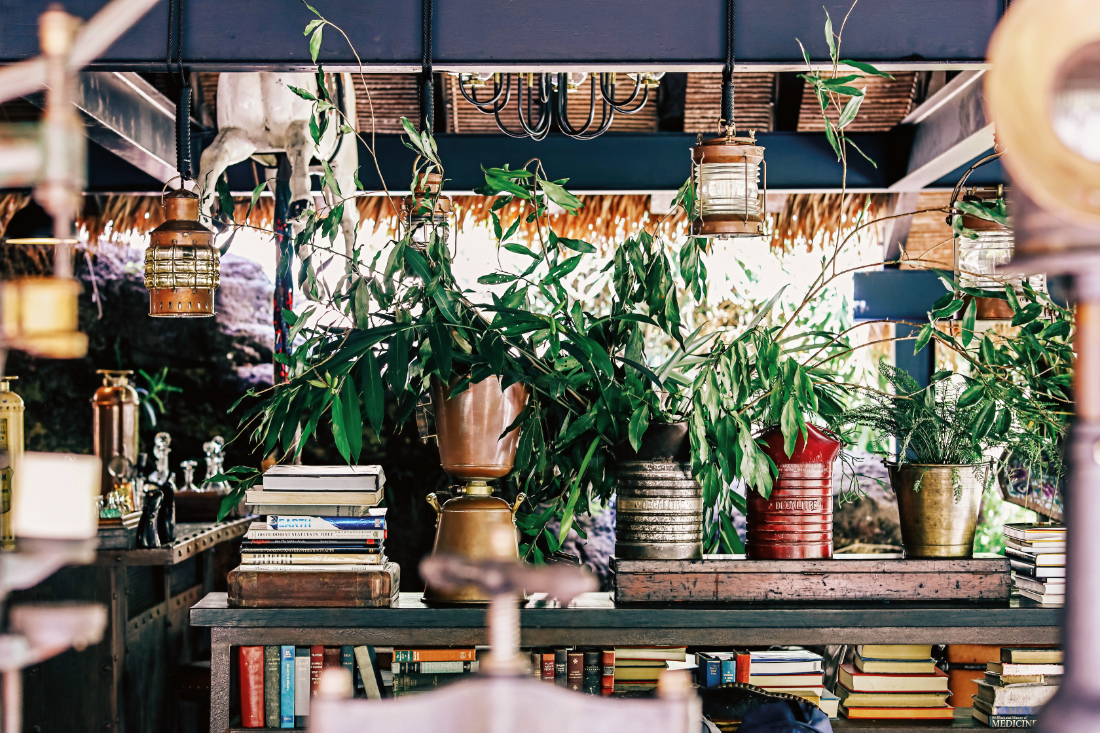 A collection of upcycled objects in a public space at Shinta Mani Wild. Photo by Elise Hassey.

Certainly, time is an issue when it comes to designing sustainable hotels, so much so that this was raised repeatedly by a Design Conversation panel on hospitality design at last year’s Saturday Indesign Singapore event. Shortening project timeframes can be seen to have short-changed sustainability and most architects would agree that more time is needed to be able to design something that not only considers immediate costs, but considers lifecycle costing as well, and the effect every design decision will have.

In designing Shinta Mani Wild’s tents, Bensley employed simple passive design principles to achieve a high degree of comfort, while maintaining low energy impact. Cross ventilation is utilised and eaves are large enough so as to provide shading when necessary. All materials were sourced locally, and furniture and furnishings are upcycled in nature, giving each interior a bespoke aesthetic that also very much evokes a sense of place.

This connection to setting and community is likewise exemplified in the recently completed Potato Head Studios in Bali’s Seminyak by OMA, in collaboration with local architecture practice Andramatin. The resort disrupts the typical hotel typology by abandoning the concept of exclusivity in favour of inclusivity. Central to the scheme is a floating ring lifted by pilotis that accommodates private guest rooms, allowing for a ground-floor open platform that’s used by the community. The rooftop has been conceived as a public space too, with the incorporation of a sculptural park. 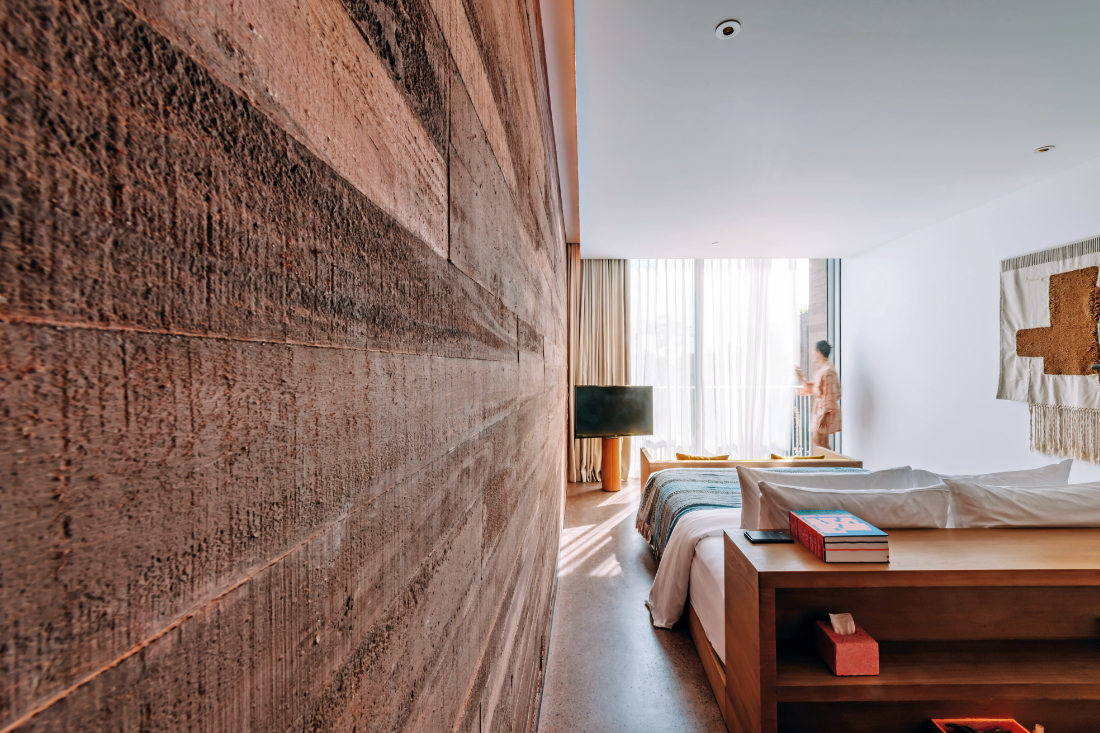 To reduce construction waste at Potato Head Studios, reclaimed wooden boards were used for concrete formwork. They created unique textures on the concrete walls. Photo by Kevin Mak for OMA.

While the design’s purpose is to promote open engagement between guests and the general public, it also operates locally by adopting the traditional courtyard vernacular ubiquitous across Indonesia. But it’s the resort’s materiality that best highlights the architects’ incorporation of environmental and social sustainability. The palette is predominantly concrete, peppered with locally sourced and recycled materials, including ijuk (a local roofing material), teak, handcrafted breeze blocks, terrazzo made from waste concrete and ceiling panels woven with recycled plastic bottles.

“We worked with a large number of local people to handcraft textures on some of the concrete walls and to create the ceiling panels,” says OMA Managing Partner David Gianotten. “The uniqueness of these finishes gives the building a sense of tactility and represents construction processes that respect both the environment and the Balinese arts and crafts tradition.” Like Shinta Mani Wild, this resort reveres its context and by being so deeply embedded within it, can help to sustain it. 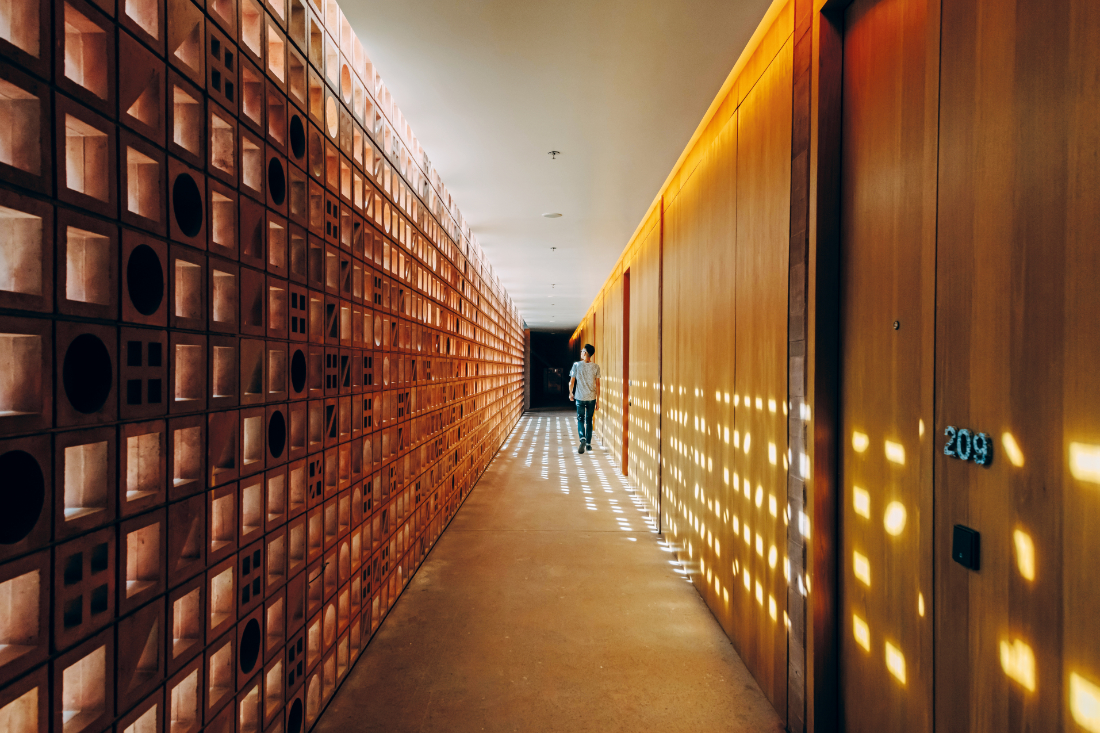 Handcrafted breeze blocks lend a unique pattern of light and shadow to a corridor at Potato Head Studios. Photo by Kevin Mak for OMA.

The conversation on sustainability in hotel design remains ongoing and the challenges look like they’ll be around for a while too. But on the other hand, all that’s needed is for architects and designers to action their innovative thinking, vigilance and best practice in collaboration with hoteliers and operators so as to achieve effective outcomes. With any luck, the goals set by the ITP will be reached and even surpassed.

Related: Jean-Michel Gathy on the art and science of designing hotels