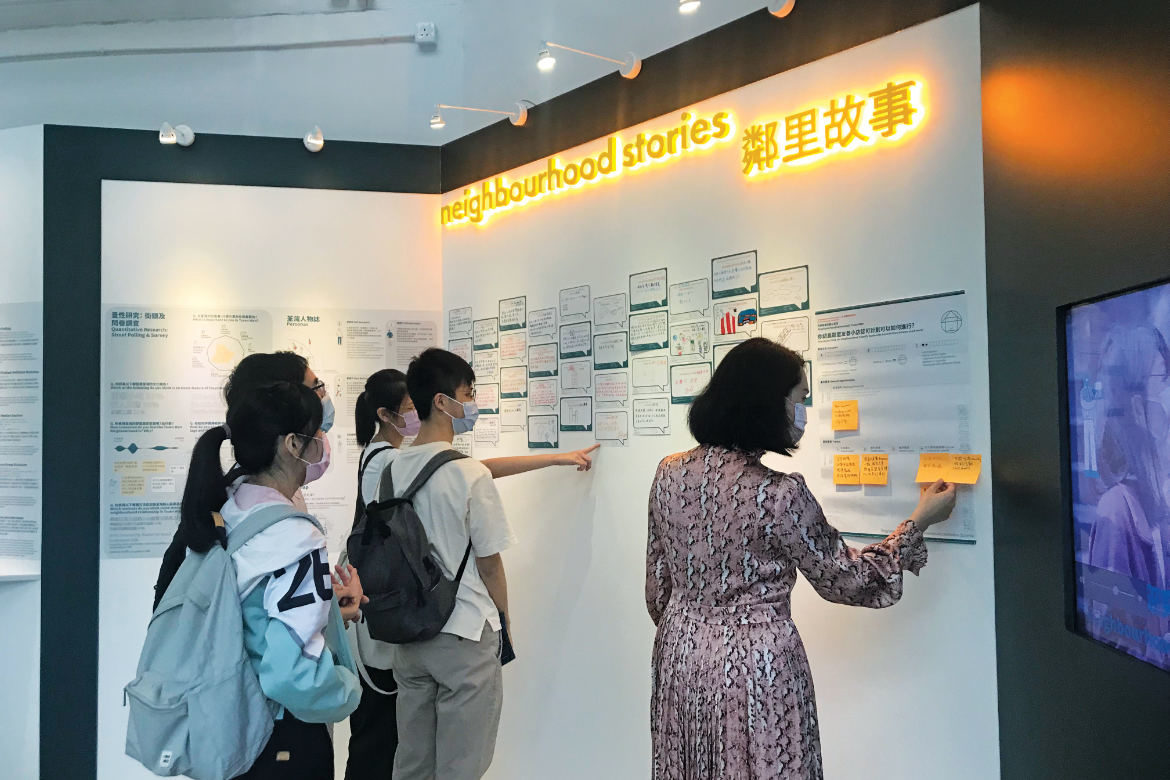 Survey findings gathered from the activations and workshops conducted by NI-Lab in Tsuen Wan district. Photo courtesy of NI-Lab.

The colloquial term for residents in Hong Kong is kaifong (街坊). Broken up, the two Chinese characters represent streets and plazas, two common public spaces everyone would encounter. Not surprising, kaifongs are often the best informed about their neighbourhoods. They share an inimitable relationship with familiar spaces they love and feel safe in. Many also have ideas on how these positive attributes could be enhanced.

Two architectural practices in Hong Kong, One Bite Design Studio (onebite) and Neighbourhood Innovation Lab by Architecture Commons (NI-Lab), established in 2014 and 2019 respectively, are leveraging on this wealth of knowledge not only for inspiration, but also to co-create spatial innovations with residents to foster a more inclusive and liveable neighbourhood.

Savouring places one bite at a time

Placemaking is at the core of onebite’s identity as a multidisciplinary design practice. In fact, it features prominently in its motto ‘Interconnecting People and Making Places’. For founders Alan Cheung and Sarah Mui, people and places are inseparable. This statement seems like a no-brainer, but the couple has observed how many large mixed-use developments have pulled residents living in high-rise apartments away from everyday activities that enliven streets.

Cheung and Mui sought to bridge this schism between urban spaces, residents, and the wider society by using design as a platform to attract and bring different communities together. Residents are encouraged to appreciate their neighbourhoods conscientiously by taking ‘one bite of life’ at a time, using food as a universal analogy everyone could understand.

onebite’s early projects likewise drew inspiration from food. One of its first public engagement project, Archi-Cookies (2015), offered a light-hearted way to learn about architecture by turning building designs into cookies. The unique workshop was held in Hong Kong, Taipei, and Kuala Lumpur, attracting a wide spectrum of participants ranging from students to families. This reaffirmed their belief in design as an inclusive process suitable for all ages. Subsequent projects such as An Object (2016) transformed a bicycle with an attached cart into a travelling installation. It became literally, a vehicle for onebite to place movable furniture in different public settings and observe how residents repurposed them to suit individual needs.

The practice was recently engaged to revitalise a number of under-utilised rooftop sports grounds. It employed colourful floor graphics, witty slogans, and flexible play spaces to complement existing amenities such as basketball courts and running tracks. For a newly completed project above Ming Tak Shopping Centre, onebite piloted a Girls Prioritised space to encourage more female participation in sports as public sports facilities, such as basketball courts, are mostly frequented by men. The customised signposts and floor graphics offered a practical yet gentle way to advocate gender equity and inclusivity through design.

Authentic placemaking occurs when decision-makers listen, understand, and incorporate voices from the streets into solutions that truly serve the needs of users. Soliciting feedback is perceived to be harder in Asian cities compared to Western societies, as residents seemed less forthcoming to express their opinions.

Eric Ho, founder of NI-Lab, holds a different view. His experience engaging stakeholders in New York and Hong Kong placemaking projects has taught him the importance of empathy. A key strategy lies in assuring residents that their views mattered. Once trust is established, people become more willing to discuss shortcomings in their neighbourhoods and provide the design team with invaluable suggestions. “While New Yorkers are more expressive compared to Hong Kongers,” Ho opined, “what mattered is not how many views residents shared, but how much information we could capture.”

For NI-Lab, placemaking is a two-way dialogue. While the practice positioned itself as a design thinking practitioner, Ho discovered it was not feasible to apply the same methodology to fit the different needs of each project. For instance, the practice’s pilot study in 2020 focused on improving open spaces in Wanchai, an ageing district between the shopping belt of Causeway Bay and the financial hub of Central. The team quickly realised the importance of understanding the community, both socially and spatially, to better engage different demographics and create common ground to build consensus.

From placemaking to remaking places

Double-ageing is a pertinent urban problem both onebite and NI-Lab identified, and believe placemaking could make a difference in. Like many cities, Hong Kong underwent both rapid urban development and a population boom after World War II. Now it has to tackle problems resulting from the deterioration of its built environment and the changing demands of a greying population. The insatiable demand to sustain economic growth also creates tension between new property developments and growing calls to preserve old neighbourhoods and businesses.

Placemakers are perhaps the ‘glue’ needed to bring developers and communities together, using causal activities like pop-up events and neighbourhood walks, to deep-dive engagement sessions and co-creation workshops that empower residents to shape their neighbourhood’s future. Urban regeneration need not result in a loss of place identity. Instead, it presents an opportunity to rebuild public spaces that truly embody the kaifong spirit.