The types of controls used in zero net energy (ZNE) buildings play a critical role in their performance. Carol LaRosa of Schneider Electric dissects a recent study to find out what makes a good control system for ZNE buildings. 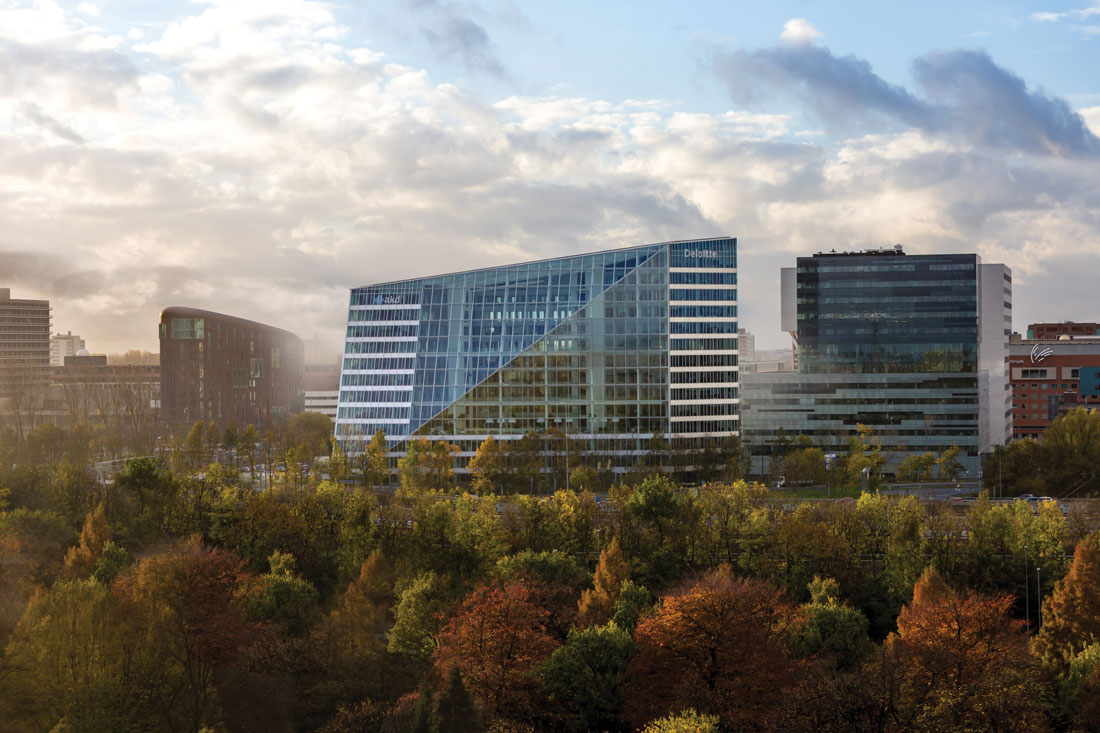 The Edge, head office of Deloitte in the Netherlands, is a zero net energy building

I’m fascinated with the idea of buildings that are energy neutral, meaning the renewable energy they generate is enough to meet their energy consumption needs, also known as zero net energy (ZNE) buildings. Enough of them are now popping up around the globe that we can start to learn which systems, controls and approaches are the most effective in constructing them.

A survey conducted by the non-profit New Buildings Institute (NBI) for a project by the Continental Automated Buildings Association (CABA) finds that ZNE buildings typically use 75 per cent less energy compared to a standard building of similar size.

That’s right – they use only one-quarter of the energy of comparable buildings.

Knowing this fact, it is not so unreasonable to think that it’s possible to generate the energy required to operate the building using on-site renewable sources.

The survey paid particular attention to the types of controls used in ZNE buildings, which all participants said were either very important or critical to success. An overwhelming majority (91 per cent) of the buildings use control systems that integrate multiple end-uses and more than two-thirds (67 per cent) have an integrated whole-building control system to handle all major end-uses, such as lighting, heat and air conditioning.

The designers seemingly think of everything, from glare control and shade to maximize the benefits of daylight, including automated shading to contribute to energy savings. Light switches are used more than occupancy sensors and some buildings have switches set to ‘off’ by default; the switches must be manually turned on and will eventually turn themselves back off. Such an approach makes sense, so you don’t have empty rooms with the lights on.

Nearly two-thirds of buildings employ plug load controls, with most using a variety of control solutions.

Nevertheless, the buildings don’t try to automate everything – nearly three-quarters of respondents (74 per cent ) say they rely on occupants to contribute to successful energy conservation.

“The highest-performing buildings have engaged operators and occupants standing on the shoulders of intelligent and integrated controls systems,” the report says.

The control design selection process is also critical to success. Identifying and communicating energy goals early on was found to be critical to the design and selection of controls. Among the top criteria in selecting a controls vendor, 86 per cent cited prior experience with the vendor, far ahead of the 57 per cent that noted price.

Two-thirds of respondents noted that attributes of the user interface and preference setting were either very important or critical to ensure proper use.

That makes perfect sense; if a control isn’t easy to use, it won’t be used effectively.

That’s likely at least part of the reason that all study participants agreed the building operator should be brought into the design process as early as possible, and be involved all the way through.

While the CABA study was focused on buildings in North America, many of its findings ring true with respect to a ZNE building that Schneider Electric knows well: The Edge, in Amsterdam. When it opened in 2015, The Edge earned the highest score ever awarded by the Building Research Establishment (BRE) – 98.36 per cent – as well as a BREEAM NL New Construction certification of “Outstanding.”

Controls are indeed essential to ensuring occupant satisfaction. One great example is a smartphone app for building employees that enables them to regulate lighting and climate in their workspaces, and even find their way around the building.

The app contributes to behind-the-scenes control systems that help make the building continually smarter. The Schneider Electric SmartStruxure building management system collects and analyzes data based on user behaviours as they move throughout the facility and uses it to optimize the building’s energy use and supply analytics that lead to future enhancements. Other controls enable facility managers to manage building operations from wherever they may be.

I expect we’ll be hearing a lot more about ZNE buildings and the controls they use.