Wing Chan is debuting nine large-scale photomontages from his ‘Urban Tapestry’ series at Choeunsook Gallery in Seoul. Christie Lee sits down with the designer-turned-photographer ahead of the show. 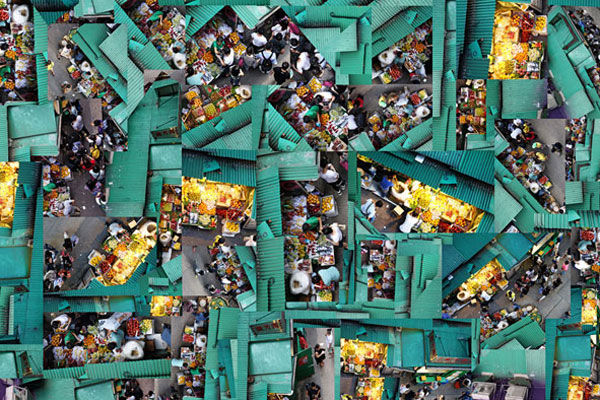 Becoming a photographer is like coming full circle for Hong Kong-based artist Wing Chan. While his childhood dream was to become an artist – he picked up painting from photo-realist artist Michael Wong – the 50-something-year-old eventually went the way of design. After reading graphic and packaging design at the Art Center College of Design in Los Angeles, he honed his craft at a few design companies before founding his own design firm, Wing Chan Design. Working out of his New York home, Chan’s firm has provided design and branding services to corporate and cultural clients.

He returned to Hong Kong in 2011. Inspired to pick up his camera, Chan kicked off his artistic career with single shots of the nit and grit of city life, shooting “dripping air conditioners in back alleys” and such, before moving on to large-scale photomontages of street signs, road junctions and train platforms. Chan is showing nine photomontages from his ‘Urban Tapestry’ series during his latest exhibition, which runs from 29 September to 27 October at Choeunsook Gallery in Seoul. With each measuring 200m by 200m, they offer a tantalising glimpse into the various textures and hues that make up contemporary city life. When did you start your ‘Urban Tapestry’ series?

It was around 2013, when I went back to New York after a two-year hiatus. The minute I stepped onto the New York subway, I felt like I’d enter some sort of a stage. That’s when I started doing photomontages. What attracted you to photomontage?

The story-telling aspect. When I was doing branding for various clients, we always had a storyboard of some sort. Similarly, a photomontage allows me to tell different but related stories in one artwork. Trains, buses, road intersections… it seems like you have an affinity for transitionary places.

I’m naturally sensitive to these places. I don’t have a car so I walk or take the public transportation everywhere I go. We might all be going in the same direction or waiting for the same train, but we all have different ways of passing the time. I want to capture these moments. Aren’t taking close-ups, as opposed to shooting from a bird’s eye view, a better way of capturing these moments?

Yes and no. I want to keep a distance from my subjects. For me, it’s the overall atmosphere I want to capture, rather than wrinkles, facial expressions and whatnot. Your photomontage of the Hong Kong MTR was created in the shape of a spiral. Why?

If you get sardine-packed trains at eight in the morning, you see people engaged in all sorts of activities – doing homework, replying to emails, taking naps. There’s so much visual noise that it makes my head spin! I wanted to distill that in my montages. You’re also experimenting with optical illusion, giving some of your photomontages a three-dimensional quality.

My montages have always been quite flat due to my background in graphic design. This is really my first foray into works that are more three-dimensional. I think this interest in the three-dimensional is also happening elsewhere – just consider how many 3-D movies there are these days! Even though your background is in design, your photomontages also spill into other creative fields in terms of aesthetics. Could you elaborate?

Indeed, though it’s unintentional. My shots of the Central street market recall the patterns of Issey Miyake’s geometric bags, while another shot of a train station reminds me of Mondrian’s paintings.