The Year’s Top Hotels in Asia

Freshly announced! The winners of the AHEAD Asia awards have been revealed. And the big winner in 2017 is…

Hoshinoya Tokyo (designed by Azuma Architect and Associates) was crowned the AHEAD Asia ‘Hotel of the Year’. It picked up three awards last night at the AHEAD Asia awards ceremony at the Capitol Theatre Singapore.

What are the AHEAD Asia awards, you ask? The Awards for Hospitality Experience and Design (AHEAD) are Sleeper magazine’s new awards programme. AHEAD brings together Sleeper’s Asian and European regional awards under one new banner (you probably remember the Asia Hotel Design Awards from previous years). AHEAD Asia was the first of eight regional award ceremonies taking place around the world during 2017 and 2018 in Asia, the Americas, the Middle East and Africa, and Europe. In 2019, the winners of the regional heats will compete in a Global Biennale.

Fourteen winners received trophies on the Capitol Theatre stage last night. AHEAD Director Matt Turner said, “The judges had a tough job on their hands choosing winners of the inaugural AHEAD Asia awards as the standard was exceptionally high across the board. The winners were selected for their exceptional design and its contribution to the guest experience in these outstanding hotel properties.”

Hoshinoya was a “clear winner” as the AHEAD Asia ‘Hotel of the Year’, said the judges, who recognised it for creating “beautiful urban spaces” and using local materials and traditions to create a unique guest experience. It also bagged the awards for ‘Urban Hotel’ (for combining architecture, landscape and interiors to create a modern interpretation of the traditional ryokan) and ‘New Concept of the Year’ (for innovatively combining contemporary design with traditional craftsmanship).

Two hotels in Singapore were awarded. COO Singapore (designed by Ministry of Design) won the award for ‘Visual Identity of the Year’. The judges felt its branding spoke clearly to its target audience of millennial travellers, and its use of graphics, artwork and signage combined well with its innovative online presence ‘Coo Connect’. Read about COO in Cubes magazine, issue 83.

The ‘Restaurant’ award went to Colony at The Ritz-Carlton Millennia, Singapore (designed by Tony Chi and DP Architects). “Outstanding execution,” said the judges, and “Tony Chi at his very best.” They admired the variety of dining experiences and how guests could have a different experience each time they visit.

The ‘Outstanding Contribution’ award also had a Singapore connection. It went to a much-admired long-time Singapore resident, architect Kerry Hill. He has been a pioneer of resort design across Asia and beyond, summarised the judges, noting some of his most outstanding projects: The Datai in Langkawi, The Chedi Bandung, Aman Tokyo, and COMO The Treasury Hotel in Perth.

Scroll through the images above to see the winners in all the other award categories. Members of this year’s 16-strong judging panel included Bill Bensley from Bensley Design Studios; Andre Fu from AFSO; Michael Goodman from EDG Design; Guy Heywood from Alila Hotels and Resorts; Zdenek Kastanek from Proof; Christine McGinnis from WATG; Jinou Park from DesignHotels; and Patrick Waring from Silverfox Studios 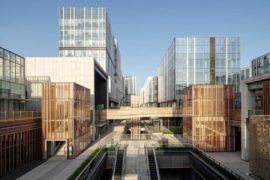