Singapore inched closer to future urban mobility solutions this week with the test run of an electric Volocopter eVTOL air taxi and the launch of the world’s first full-scale VoloPort. 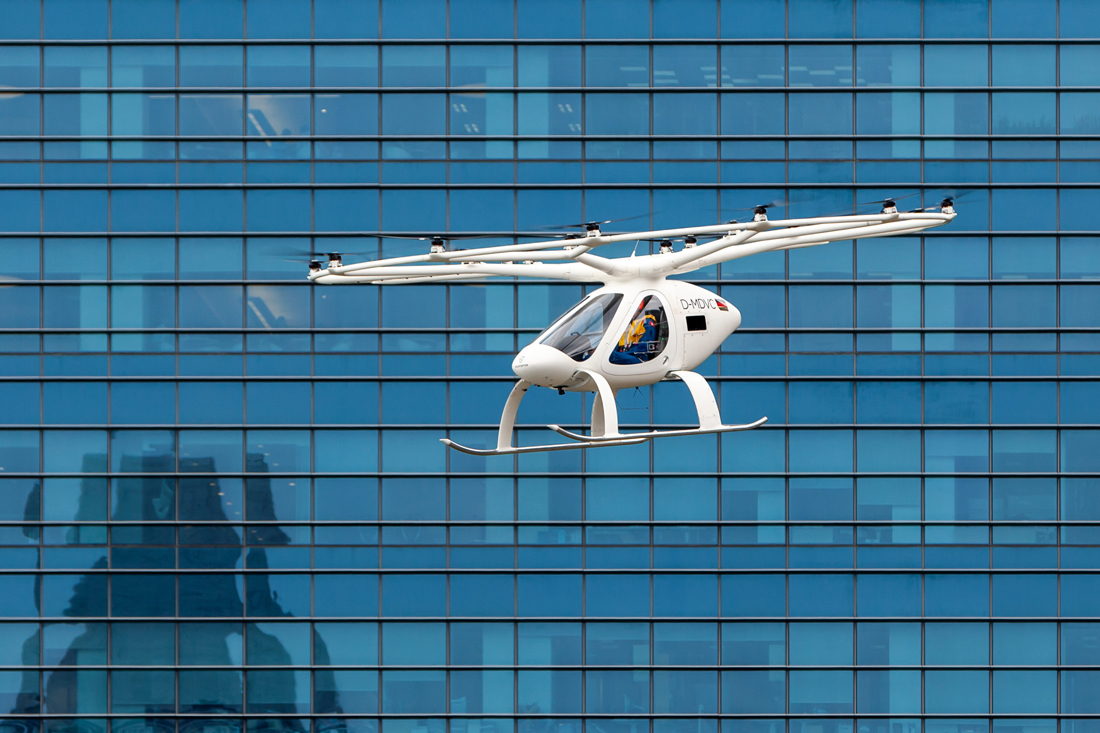 Urban air mobility is on its way to Singapore if this week’s test flight of an electric multicopter is any indication. In line with plans we reported in May, German urban air mobility business Volocopter completed a piloted flight over Marina Bay on Tuesday 22 October as part of its efforts to bring commercial air taxi services to Singapore. 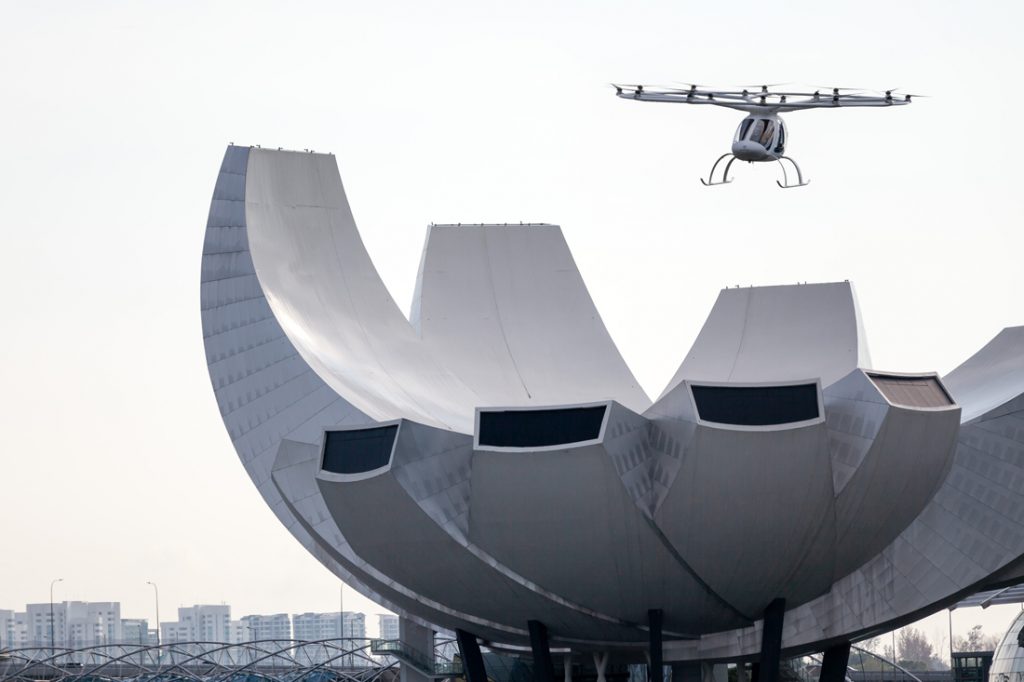 The previous day, Volocopter and Skyports (a UK-based urban air mobility infrastructure company) unveiled the world’s first full-scale air taxi vertiport at the Float @ Marina Bay. Named VoloPort, and presented as a prototype, this take-off and landing port could in theory accommodate 10 to 15 eVTOL (electric vertical take-off and landing) vehicle flights per hour. 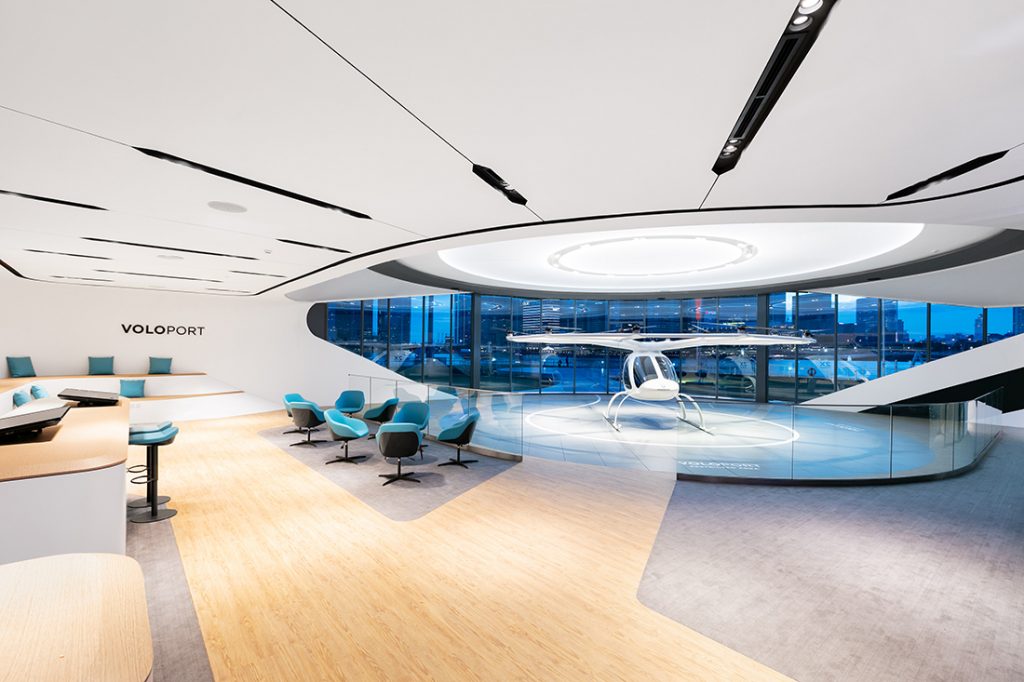 Volocopter has been working with government authorities here in its testing phase to validate the suitability of Volocopter air taxis to use in Singapore. Its electric eVTOL aircraft point toward scalable and quiet urban air mobility. The company’s first ever piloted flight of a purely electric multicopter was in 2011, and in 2017 it demonstrated the world’s first autonomous eVTOL flight in Dubai. 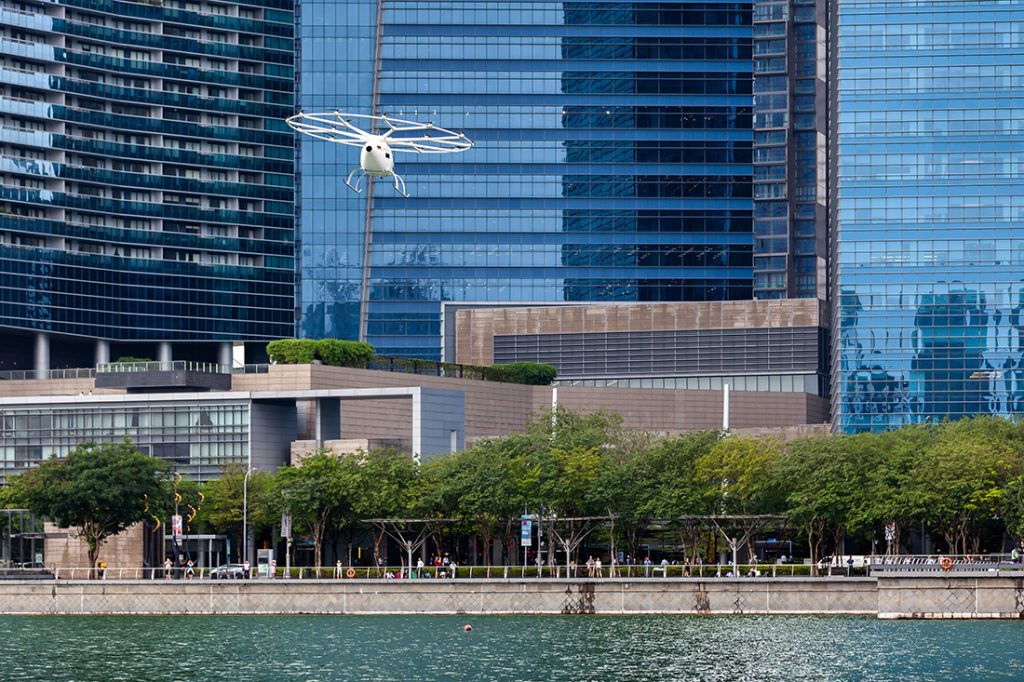 Tuesday’s piloted test flight over Marina Bay covered a distance of approximately 1.5km and lasted for two minutes, with an average cruising altitude of 40m. It followed extensive testing in Germany and at Seletar Airport in accordance with the Civil Aviation Authority of Singapore (CAAS).

“[A]ir taxi operations are not a faraway future, but very feasible to achieve within the next two to five years.”

“The flight today in Singapore was the most advanced Volocopter flight yet, and the piloted flight was as stable as ever,” said Florian Reuter, CEO of Volocopter. He continued, “At the same time, we are showcasing a prototype of our full-scale VoloPort Infrastructure, allowing for a realistic demonstration of air taxi boarding and maintenance services. Never before have people been this close to experiencing what urban air mobility in the city of tomorrow will feel like.” 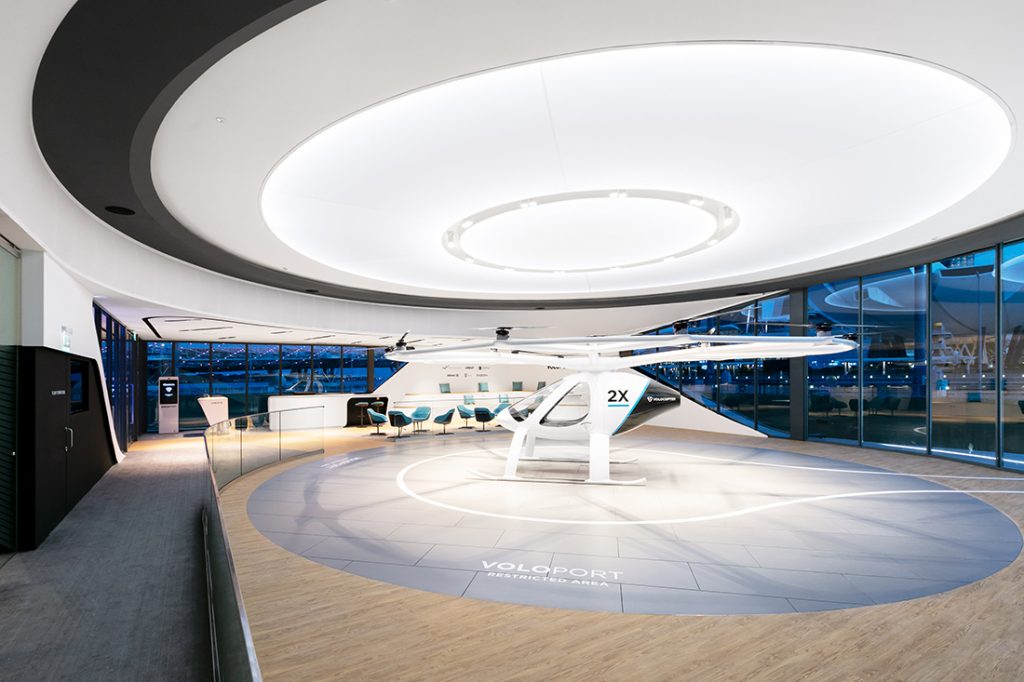 The VoloPort at Marina Bay, designed by GraftBrandlab and manufactured by A&A Expo International, was designed to be mobile, and thus has modifications from the design of future fixed VoloPorts. It has not been certified for use partly due to the modifications. So while a Volocopter is displayed inside it, the test flight did not take off from or land on the VoloPort prototype – rather, from the grassed Promontory @ Marina Bay. 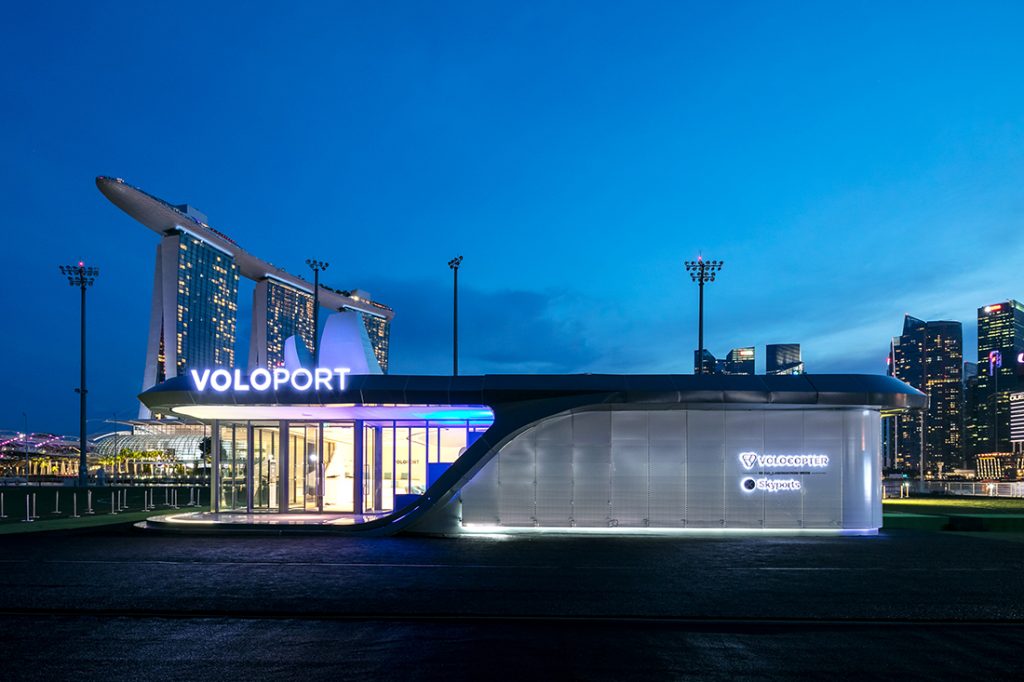 Vertiport infrastructure is crucial to the commercial operation of vehicles such as the Volocopter in urban environments. The VoloPort has a modular design that can be adapted to fit rooftops, railway stations, parking lots and other city locations. 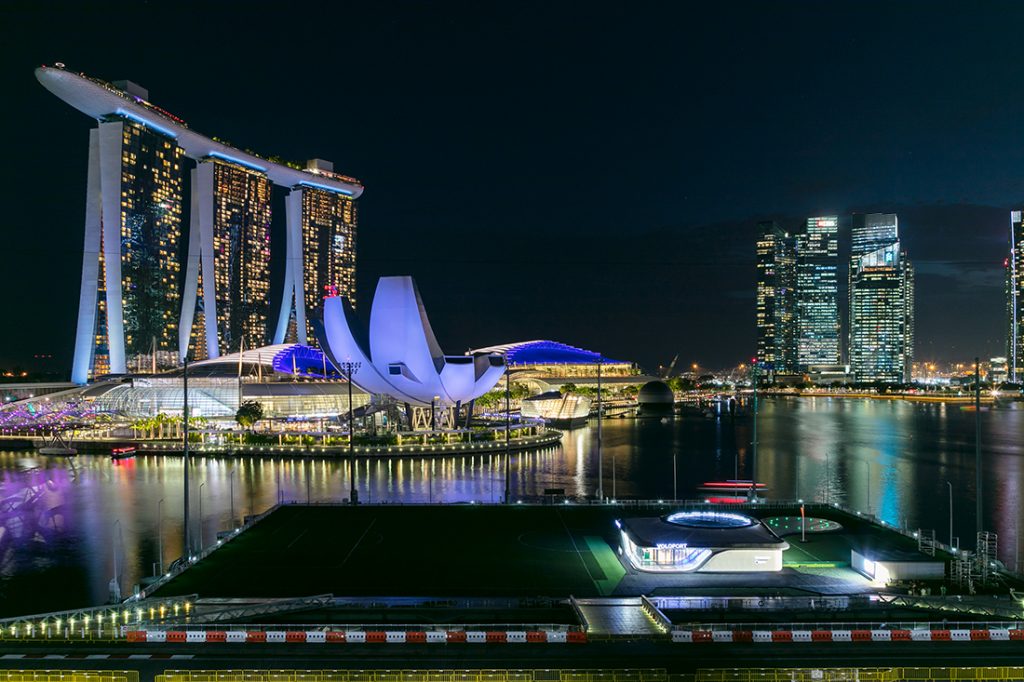 “The VoloPort is an important step towards establishing an entire air taxi solution in Singapore,” said Duncan Walker, Managing Director of Skyports. He continued, “Skyports has identified a number of potential VoloPort locations and air taxi routes across the city state. We look forward to the next stage of our exciting partnership with Volocopter as we work towards the introduction of commercial air taxi services in the city state.” 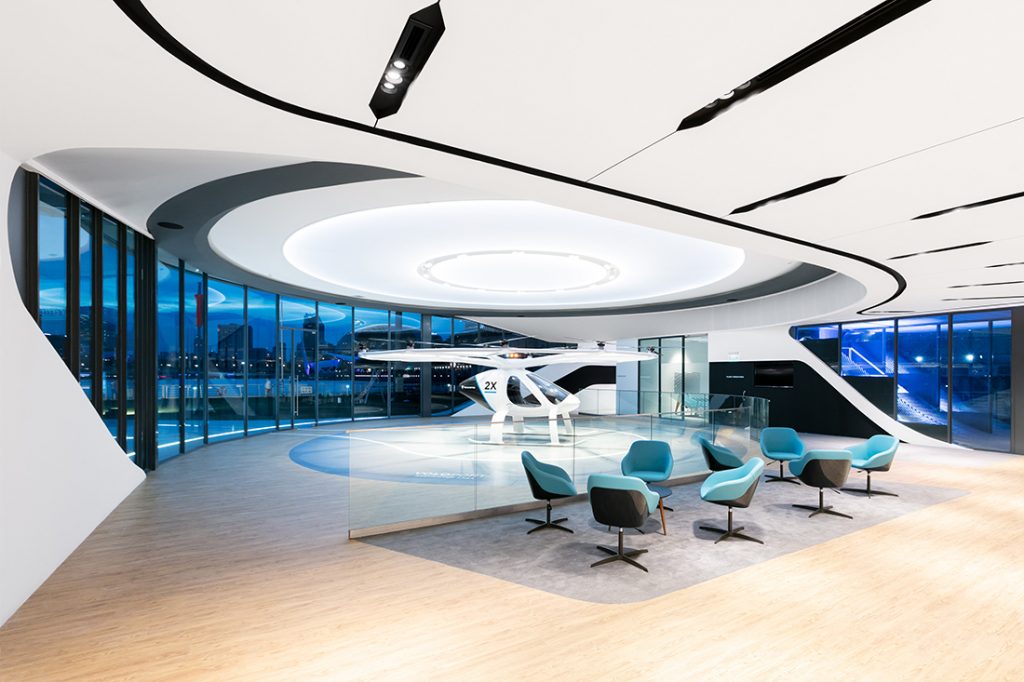 Reuter from Volocopter commented: “Standing inside the VoloPort makes urban air mobility feel extremely real and demonstrates that air taxi operations are not a faraway future, but very feasible to achieve within the next two to five years. Today marks a fantastic step forward!” 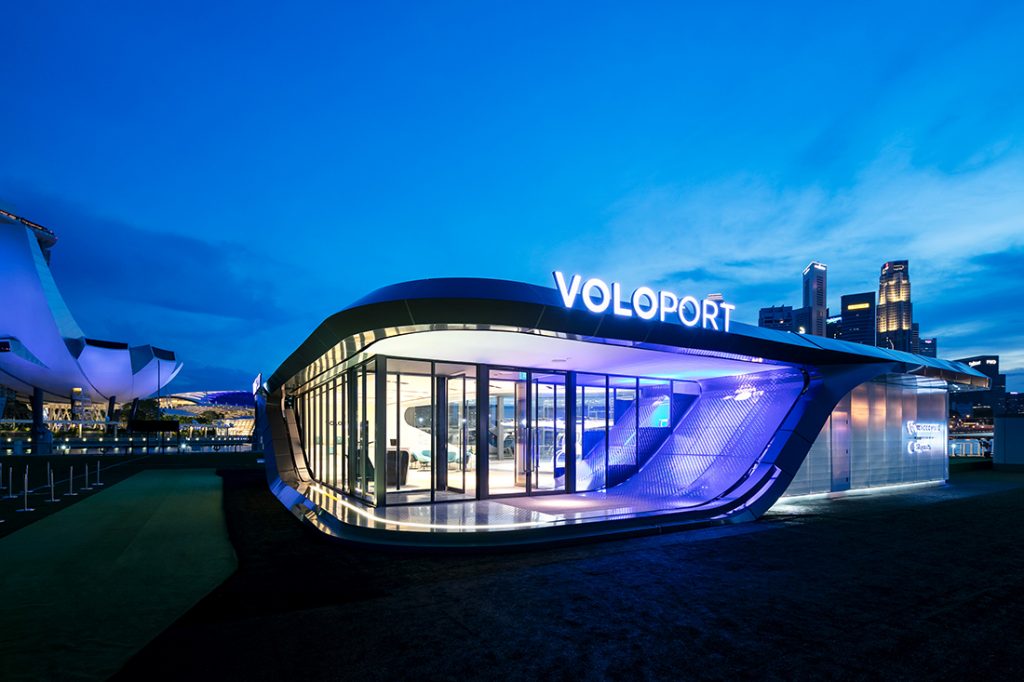 Volocopter opened an office in Singapore in January 2019 and has started to build up a local team to support its Southeast Asia expansion plans. The company recently presented VoloCity – the next-generation eVTOL air taxi which has been designed to comply with European Union Aviation Safety Agency (EASA) requirements. Volocopter hopes to bring the VoloCity to commercial certification with its recently signed funding round. 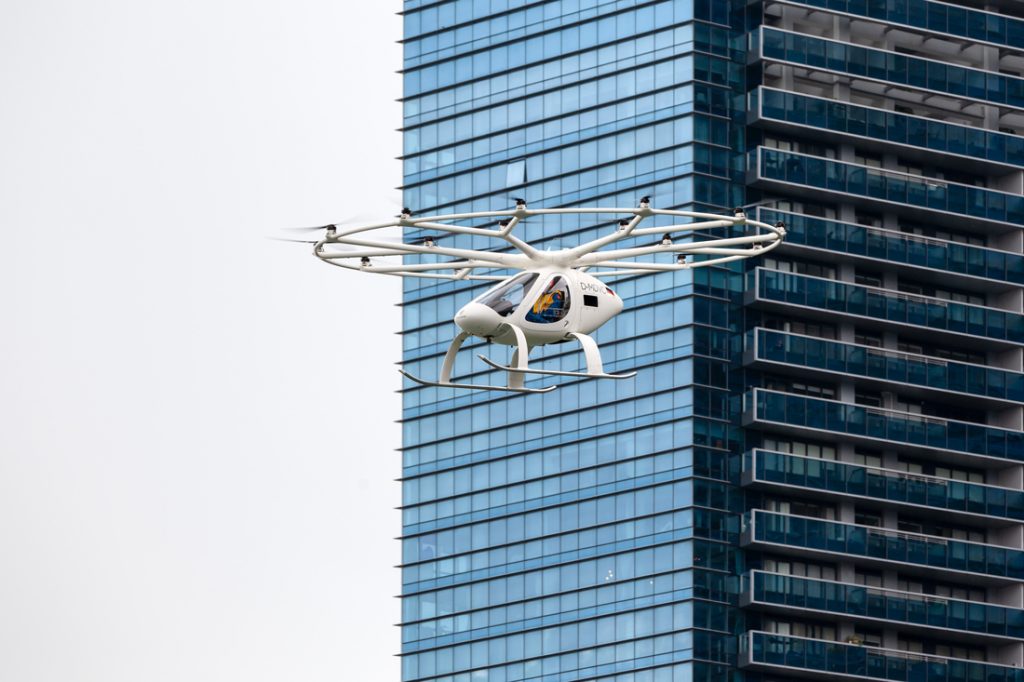 Singapore’s government agencies appear to be on board with the concept of air taxis. Said Tan Kong Hwee, Assistant Managing Diretcor of the Economic Development Board, “The Singapore Economic Development Board hopes to be an enabling partner for companies developing new mobility technologies such as autonomous vehicles and urban aerial mobility. We are happy to support Volocopter in their development plans and hope that this is a first step towards the creation of more exciting business and job opportunities in Singapore.”