Taking place in the Meiji-Jingue Gaienmae Central Venue, Tokyo Design Week 2016 brought together over 700 exhibitors from small design groups to large corporations such as Panasonic and Fujifilm, even including student works offering a nod to the future talents of Japan.

This year’s Tokyo Design Week featured interactive installations, design talks, and a series of live performances and events. Super robots and 3D printing seemed to be a main focus, reflecting a digital future in production and design. SONY presented their fashion entertainment ‘FES” watches, while Property-developer Sekisui House showcased an example of future living. Alongside the usual corporate products was the highly popular Architecture Models Exhibition providing an insight into some of Tokyo’s most prominent architectural structures, including an exclusive look at Kengo Kuma’s maquette for the upcoming Shinagawa Station set for completion in 2024.

New to the fair was an outdoor air tent exhibition installation that paired leading designers and architects with commercial corporations reimagining products and materials in form and space. A highlight was architect Kengo Kuma’s collaboration with cosmetics company Kosé, a large-scale snow dome titled ‘Paper Snow’ that incorporated paper supplied by TAKEO detailing the pulp origin and weight. The white paper strips weightlessly floated throughout the dome-shaped air tent, creating an illusion of snow and connection to nature.

Tokyo-based designer Keita Shimizu presented his OLED Folding Screen Light, a small portable light source in the shape of a traditional Japanese ‘shoji screen’ room divider. Small in size, it championed an integrated Organic LED light, which could stand positioned like a traditional folding screen, or be hung on the wall.

Whilst Tokyo Design Week 2016 offered limited involvement from the wider design community with focus centred on larger commercial corporations, it did allow insight into Japan’s select designers and how they envision the future of design. 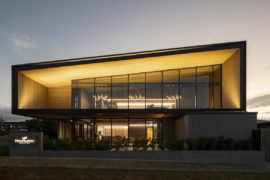