‘A State In Play’ is the theme of this year’s SingaPlural festival, which takes a tighter curatorial direction under the guidance of design and prototyping studio Produce.

SingaPlural 2018 was the star at last night’s launch of Singapore Design Week at the National Design Centre (NDC). It is the annual week’s (well, fortnight’s) anchor event after all. And the star of SingaPlural was its anchor installation – a centrally positioned pavilion of layered, twisting surfaces that explore laminate as a material in itself rather than simply a surface.

Titled Formica For More, it was designed and built by Produce (the studio curating SingaPlural 2018) and the ‘buildlab’ Superstructure with Formica. The laminate and plywood pavilion is a bold manifestation of the SingaPlural DNA; that is, to be a catalyst for collaborations between brands and designers. It is also true to the explorative fascinations of Produce, which have been impeccably demonstrated in projects such as ‘Fabricwood’, the Herman Miller shop-in-shop at Xtra that won ‘World Interior of the Year’ at the INSIDE Festival of Interiors 2017.

“Produce has always been interested in finding out the basic essence of things,” the studio’s Design Director and Co-Founder, and SingaPlural 2018 Curator, Pan Yi Cheng told Indesignlive.sg at NDC. “A lot of our projects are investigations into the basic attributes of material itself. So here we questioned, what is Formica? What is laminate?” 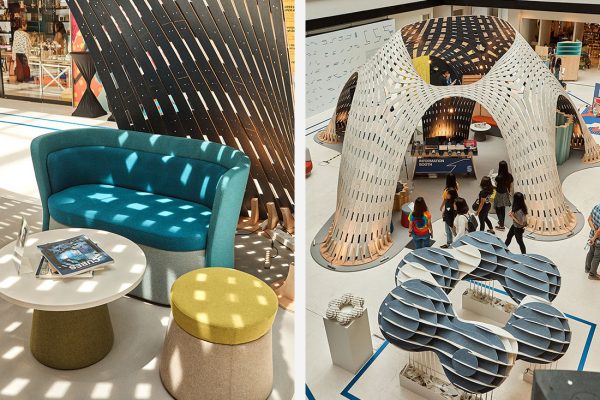 Each strip of the pavilion was created by laminating a core of bendable plywood and two layers of Formica, testing suppleness and stiffness through the combination. “If you think of the pavilion proportionately, it’s like an eggshell. It’s a big span with a relatively thin material composition,” said Pan.

Produce also experimented with breaking the structure of laminate (by cutting across the grain on the underside of the laminate sheet) to create beautiful undulating surfaces that are used for various purposes within the pavilion – from a display table for samples to a blind. 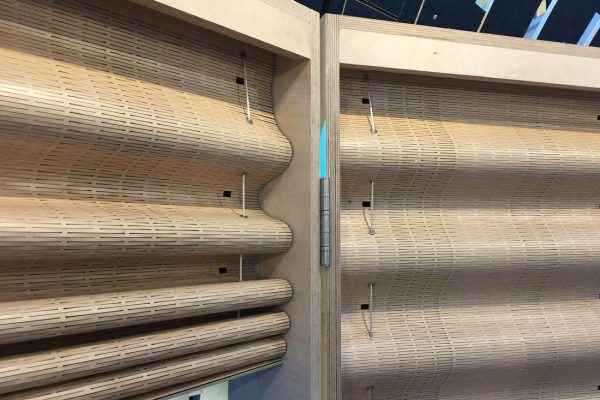 “I’m always looking out for opportunities to test different compositions and material systems,” said Pan, echoing the investigative spirit that lies at the heart of his curatorial direction for A State of Play and the most successful Singaplural installations.

“I asked the designers to look at setting up an experiment rather than come up with a finished product. So for example, Studio Dam show their entire process [of experimenting with ceramic]. I told them, ‘You don’t need to feel pressured to come up with a lamp.’ It’s about showing the experimental process behind it. It was quite refreshing for a lot of the designers. I wanted this whole idea of play as experimentation. I feel that even if you fail at something, you learn from it.”

While acknowledging the structural problems of tight timelines and lower design fees that many international counterparts, Pan hopes that Singapore’s designers can find ways to “take a step back, be a bit more relaxed, and not so worried about failing at something.”

He continues, “I’ve tried to suggest that Singapore is a state that is more conducive now to failures. People have the opportunity to move around different fields of design. They’re not stuck in interior design or product design or architecture for example. And we are a design society that’s much more ready to accept these ideas of cross breeding and inspiring each other. So I wanted to slow the pace down and present research rather than finished products.” 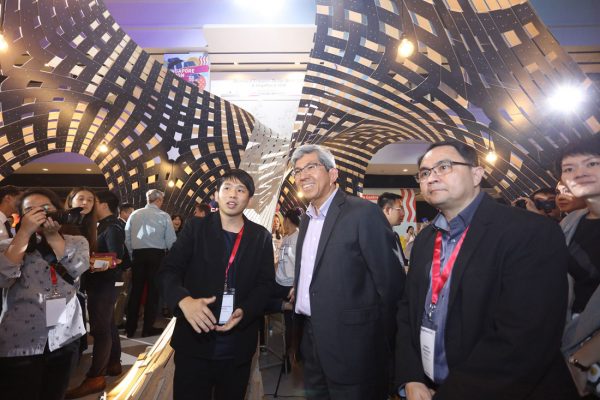 Pan Yi Cheng, Curator of SingaPlural 2018, brings Dr Yaacob Ibrahim, Minister for Communications and Information, on a tour of the exhibition.

Other designers and brands in the show include Meta Studio with Antalis, Gabriel Tan Studio with Ewins, Publicworks with Kvadrat, and more. Catch the 13 installations at SingaPlural at the National Design Centre till 18 March.

Produce has also curated a series of lectures by Ben Koren (One To One, USA), Steffen Riegas (Herzog & de Meuron, Switzerland) and Ren Horng Yee (UNStudio, The Netherlands), which will be held on the afternoon of Friday 9 March at the NDC Auditorium. Register here.