More architects addressed the fundamentals of their creative efforts in part two of our recap of this year’s Singapore Institute of Architects (SIA) Conference, held during Archifest.

What are the needs and challenges of our time and how does architecture respond and be responsible towards them?

People, time, environment and life were the main themes around which speakers presented their work and ideas at the Singapore Institute of Architects Conference (SIA Conference), held on 2 October at the Marina Bay Sands Singapore Expo & Convention Centre as part of Archifest.

The one-day forum was organised in four themed sessions. The first part of our recap covered the  ‘Design For People’ and ‘Design For Time’ sessions.

The second half of the day opened with the session ‘Design for Environment’ and with Markus Roselieb of Chiangmai Life Architects sharing his expertise on bamboo as a construction material. Presenting projects such as the multi-award winning Sports Hall at the Panyaden International School, Roselieb highlighted the incredible strength and resilience of bamboo, the sustainability of building with it, and the potential and challenges the material presents for modern buildings. 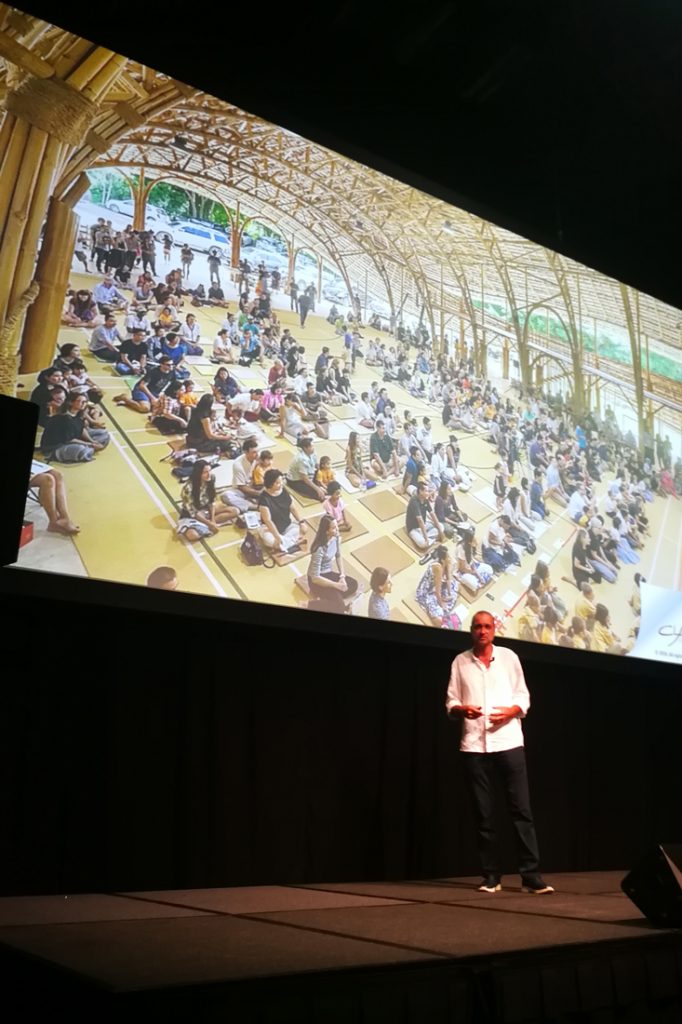 In reference to the untapped potential of bamboo, Roselieb commented, “Bamboo has an image problem. It is viewed as alternative, hippy, and poor because it hasn’t been brought into the 21st century. The problem is not with the material; the problem is human ignorance… How much money has gone into the development of steel construction, how much has gone into (research and development for) bamboo? We really don’t know how to work with this material yet.”

Doan Thanh Ha of Hanoi based H&P Architects put forward the idea of creating ‘essential spaces’. He defined ‘essential spaces’ as those that meet fundamental human needs such as safety and a sense of belonging. These buildings are constructed of cheap, locally available materials with indigenous building techniques so they can be built or repaired easily and at a low cost by its people. 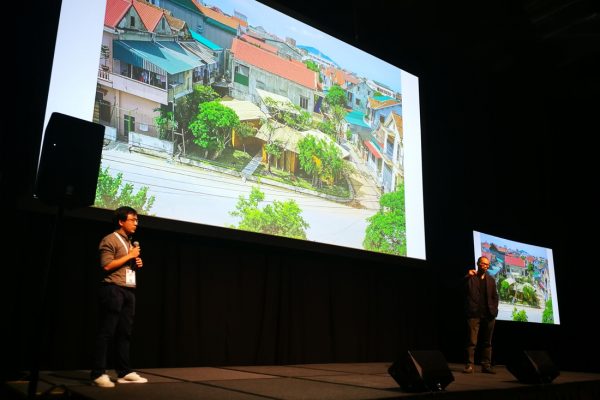 This is important especially for many disadvantaged communities that are living vulnerably in disaster-prone areas. Projects presented included the flood-resistant Blooming Bamboo home, which can be mass produced with modules, and be built in 25 days by its users for 2,500 USD.

In the ‘Design For Life’ session, Siew Man Kok of Singapore based MKPL Architects raised the idea of designing opportunities for the development of the community, among other aspirations. On the subject of the life of a building, he said, “Whatever we design, we are concerned about what will happen in the spaces that we design.” 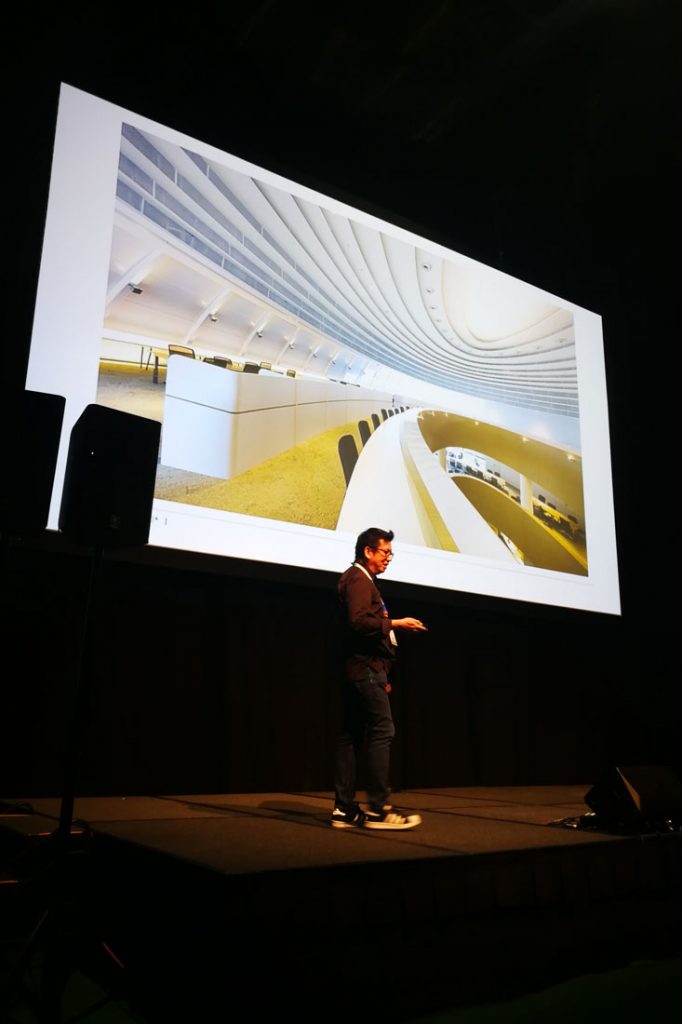 Of the Kent Vale faculty housing at the National University of Singapore, Siew talked about gestures such as creating combined entrances and central circulation spines as strategies to let people meet and interact.

With respect to the unfenced water features (that may pose as a danger for children) that had been proposed in the design of the Rail Corridor Housing Estate, Siew suggested this scenario: “Children can fall into the pond, so parents will have watch over them. And when parents watch over children, more parents will know one another and help to look after each other’s kids.”

Budi Pradono of Budi Pradono Architects suggested that it is important that architects “have a sensitivity of place”, among other qualities and attitudes such as the willingness to experiment and to propose new ideas for living. 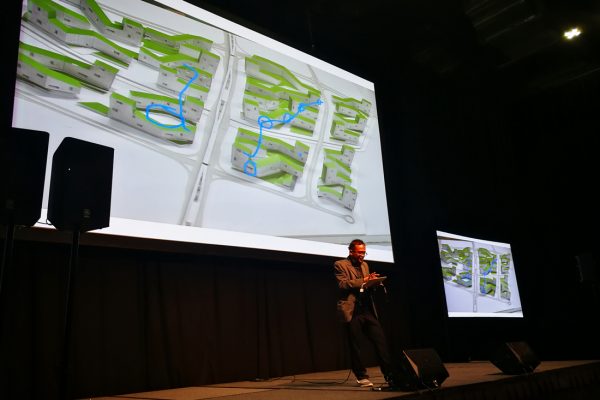 Many of Pradono’s presentation slides were beautiful imagery of the Indonesian archipelago (the volcanic Banda Island cluster, Mount Tambora, etc.)—landscapes that Pradono adores and that have inspired much of the practice’s output.

These include Dancing Mountain House and I Shelter Banyuwangi pavilion—buildings whose forms echo the Javanese mountainous topography and whose character and spirit are tied to their land and natural surroundings. Beyond being house or shelter, these structures gain meaning in their specificity of place.

The final presentation of the day was by Manuel Der Hagopian of G8A Architecture & Urban Planning, whose offices are based in Hanoi, Ho Chi Minh City, Singapore, and Geneva. (G8A’s Jungle Station is Cubes 93’s cover story)

Der Hagopian framed his talk around three key ideas of “reality”, “unity” and “conception”. Several ideas about high-density mass housing were put forward, including how the creation of a sense of identity was crucial in such housing projects. 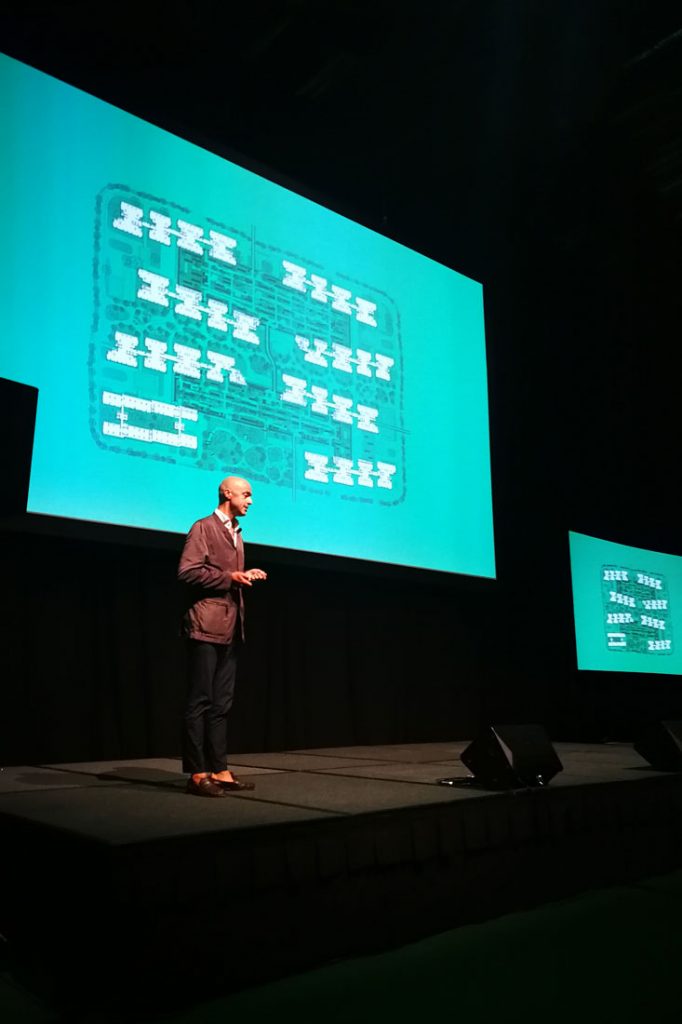 The idea was discussed in reference to the project Punggol Waterway Terraces, whose planning and massing have been designed to “reintroduce a sense of communal identity at a human scale”. Der Hagopian also proposed the notion of designing “potential for spaces”, as opposed to “fixing the activity of a space”.

He cited the example of the continuous corridors (with no dead ends) in the residential blocks of in Punggol Waterway Terraces that provide residents with a measure of freedom about which way they wanted to leave or return home.