MAD Architects Create A Tunnel Of Light In Niigata, Japan

MAD Architects have completed an artistic restoration of the Kiyotsu Gorge Tunnel in Japan’s Niigata prefecture as part of the 2018 Echigo-Tsumari Triennale. The restored tunnel has been dubbed Tunnel of Light and was inspired by the five elements of wood, earth, metal, fire and water.

The MAD team, led by Ma Yansong, installed several permanent artistic spaces along the historic lookout tunnel, which gives panoramic views over one of Japan’s three great chasms. “Each one of the installations forms a poetic space where visitors can transcend the role of observer, and become an active participant – allowing individuals to place themselves in nature in unexpected ways,” says MAD. 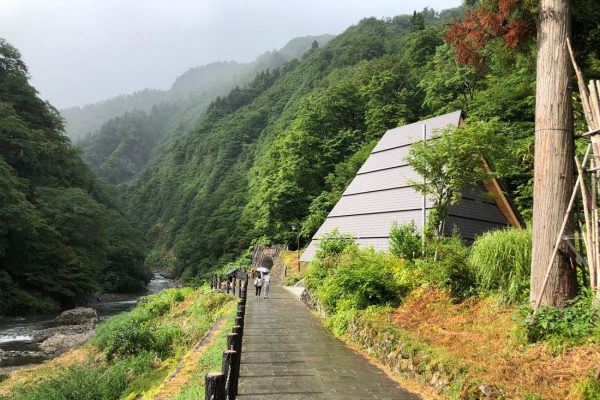 The Echigo-Tsumari Triennale was launched in 2000 to invigorate a rural area of Japan suffering from an ageing and decreasing population as young rural people move to Japan’s big cities for education or work. The Triennale has seen 160 artworks across 200 villages spanning more than 760 square kilometers. It was established by internationally renowned artists in collaboration with locals to bring new life to fields, forests, empty houses, schools, and other abandoned spaces.

For 2018, MAD transformed a historic, 750-metre-long passageway along the famous Kiyotsu Gorge with five distinct installations. Visitors are welcomed by Periscope, a small hut inspired by the element wood and housing a café, shop, and foot spa. On the second floor, above the communal hot spring foot spa, a circular aperture in the pitched cedar ceiling is encircled by mirrored lenses that reflect the nature of the surrounding site inwards. 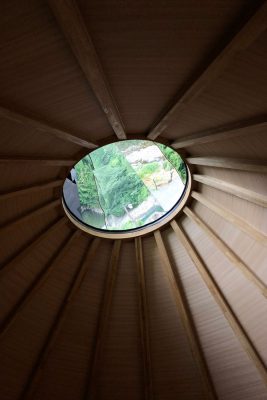 Along the tunnel, MAD expresses the element of earth with a series of coloured lights paired with mysterious music, to create a curious, haunting ambience. “It sparks a certain curiosity of the unknown for those who are wandering through,” says MAD.

For the element metal, MAD has transformed the first lookout point of the tunnel into a clever investigation of the public and the private with … a toilet. The gorge-facing wall is transparent, but covered in a metallic film that only allows one-way views from the inside out. 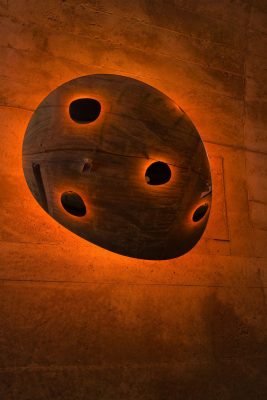 On the second lookout point, MAD installed the fire-inspired The Drop – a series of dew-drop-like convex mirrors, backlit by fiery, red light. “While they project a reality by mirroring the natural environment, they also appear surreal, like molecules of water, they are suspended from the ceiling and walls, frozen in time,” says MAD. 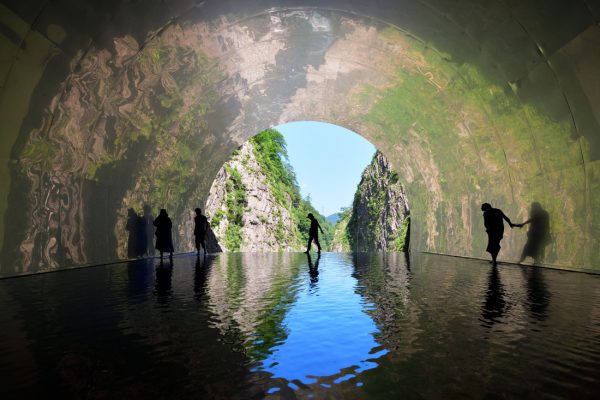 MAD’s Tunnel of Light culminates in the water-inspired Light Cave, where a shallow pool of water and semi-polished stainless steel on the tunnel walls draw the gorge’s distinct rock formations, lush greenery and turquoise water into the enclosed space through reflections. Explains MAD, “The essence of the Light Cave brings both a lightness and stillness into the once dark, dewy tunnel, invoking a feeling of everlasting solitude.”