The Designposts project at the 2021 London Design Festival explores the beauty of hardwood while celebrating emerging local talents and the creative history of London’s neighbourhoods.

Established in 2003, London Design Festival (LDF) has become an important annual event in the contemporary design community, showcasing an array of exhibitions and works of designers, artists, architects and retailers. This year, one of the key additions to the Festival is the Designposts project. It’s a collaborative initiative by LDF, the American Hardwood Export Council (AHEC) and three British furniture makers, which pays tribute to the creative culture and history of London’s neighbourhoods, and uncovers the potential of an often-underused but highly sustainable material – American red oak. 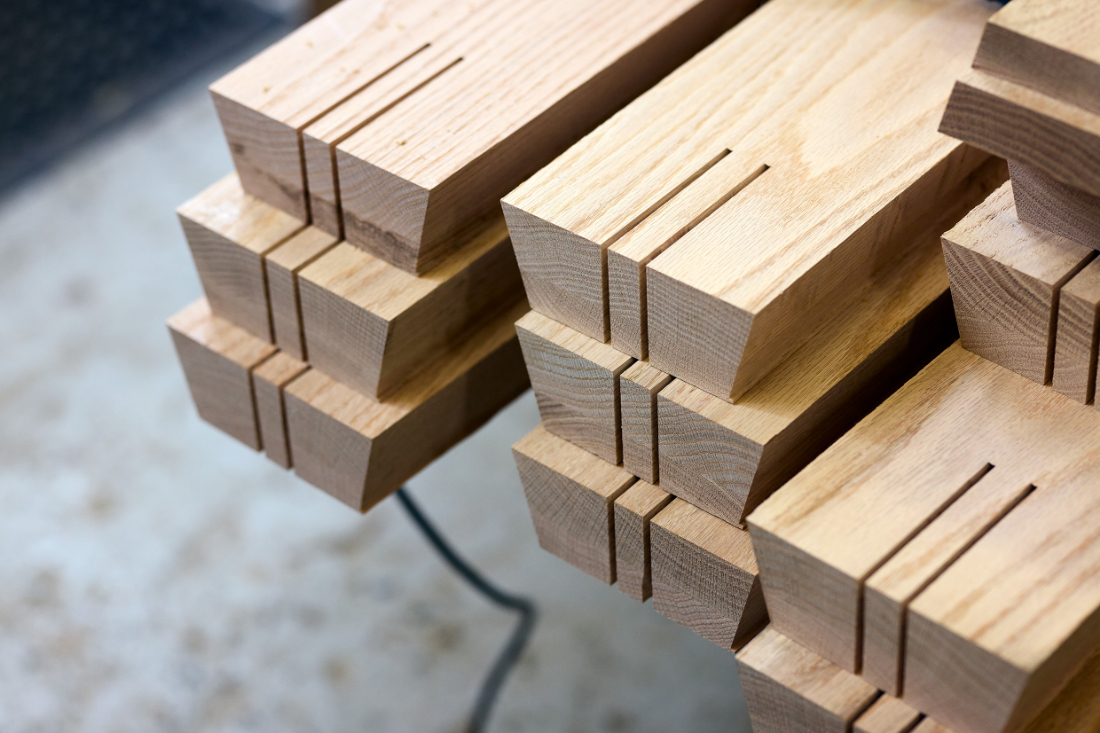 The initiative was presented from 18th to 26th September as a free open-air exhibition of art and design that provides a platform for emerging designers from either London Metropolitan University or the Bartlett School of Architecture at UCL to showcase their talent to the public.

Under the guidance of AHEC, project mentors and expert furniture makers, architecture and design students were each given an LDF district and asked to research and develop a concept that captured the unique identity of a particular place in the city. There were no constraints to what the responses could be apart from the material selection itself – red oak – to communicate to the designers and the wider public that hardwoods are viable material options from a sustainability perspective. 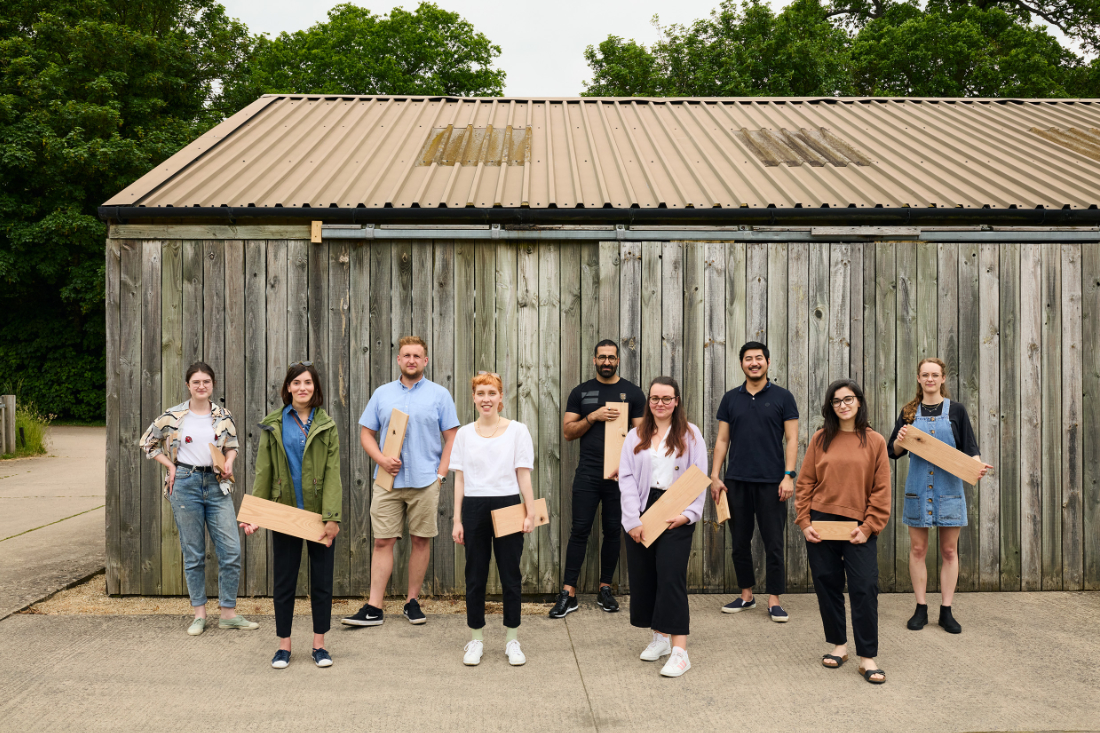 The ten budding designers who participated in the Designposts initiative

A total of ten Designposts by the budding designers acted as beacons to festival-goers that they have arrived at an LDF district and serve as a natural starting point from which to explore other projects and installations within it. Here, we explore five stand-out concepts that exemplify the spirit of the initiative and the festival itself.

Made by Benchmark Furniture

Paying homage to Islington’s history as a block-printing hub in the 18th and 19th centuries, Carrie Coningsby has created a rational vaulted timber structure as a ‘local landmark library’, complete with decorative hanging disks and block-printed detailing. Paying special attention to wood connections and amplifying the significance of the structure beyond that of a decorative canopy with narrative illustrations on each pillar, the designer’s invitation to discover and reconnect with Islington’s rich creative history shines through in this thoughtful installation. 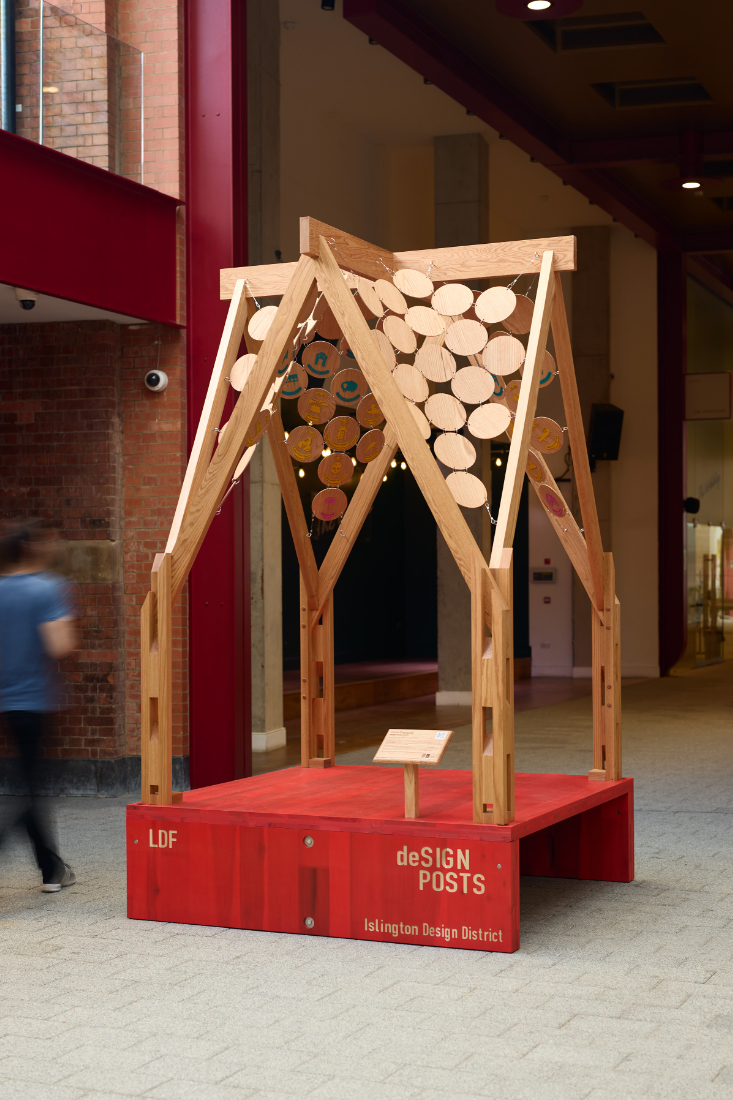 Made by Jan Hendzel Studio

A personal response by the designer stemming from time spent exploring the streets of Southwark, the installation captures the vibrancy and multi-ethnicity of the area in a tree-like sculpture. Comprising a central 12-sided column with cantilevered arms that hold 24 CNC-cut and hand-finished characters of Peckham, the deceptively simple structure is actually ingenious in its technicality; from the precise-cut slots at the top edge of the structure to bespoke timber brackets used to secure each of the 12 characters in place. 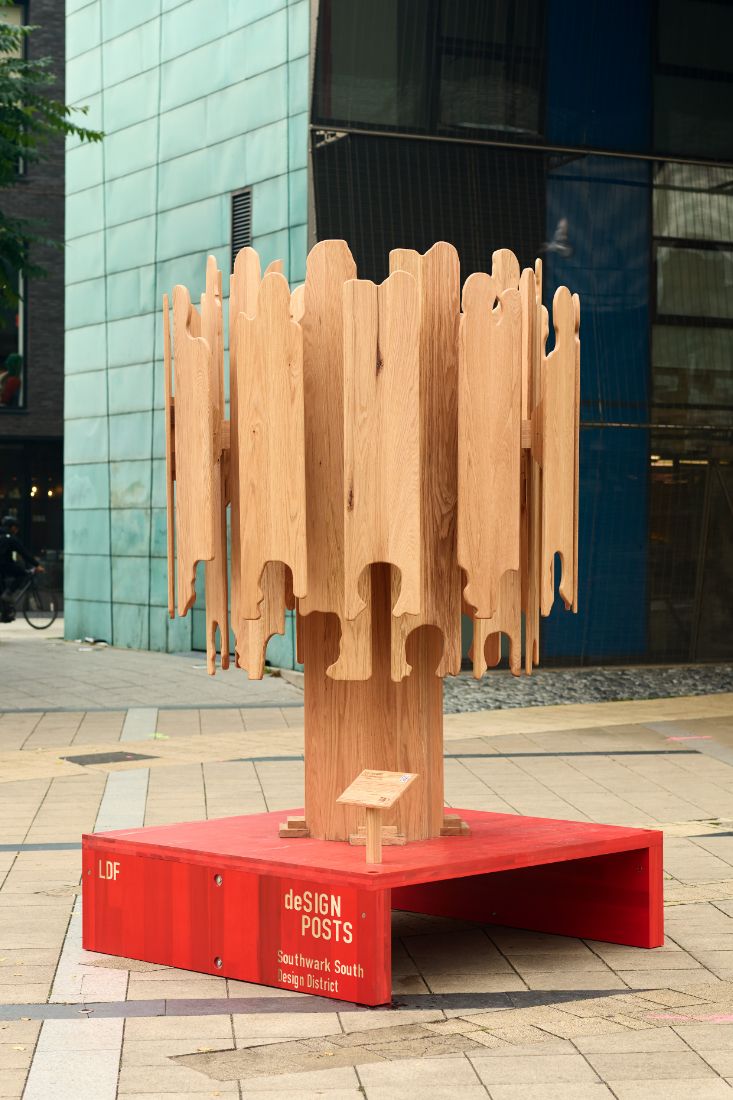 Made by Benchmark Furniture

A sail-like structure is striking enough at a first glance, revealing the diverse techniques and methods used by the creative community of Design District and the influences in the area’s history by the myriad of design cultures. The faceted detailing of each sail component, for example, connects into the mast with a series of hand-turned wooden pegs, while the 16-millimetre hemp rope has been made by a traditional ropemaker to hold the sails under tension. 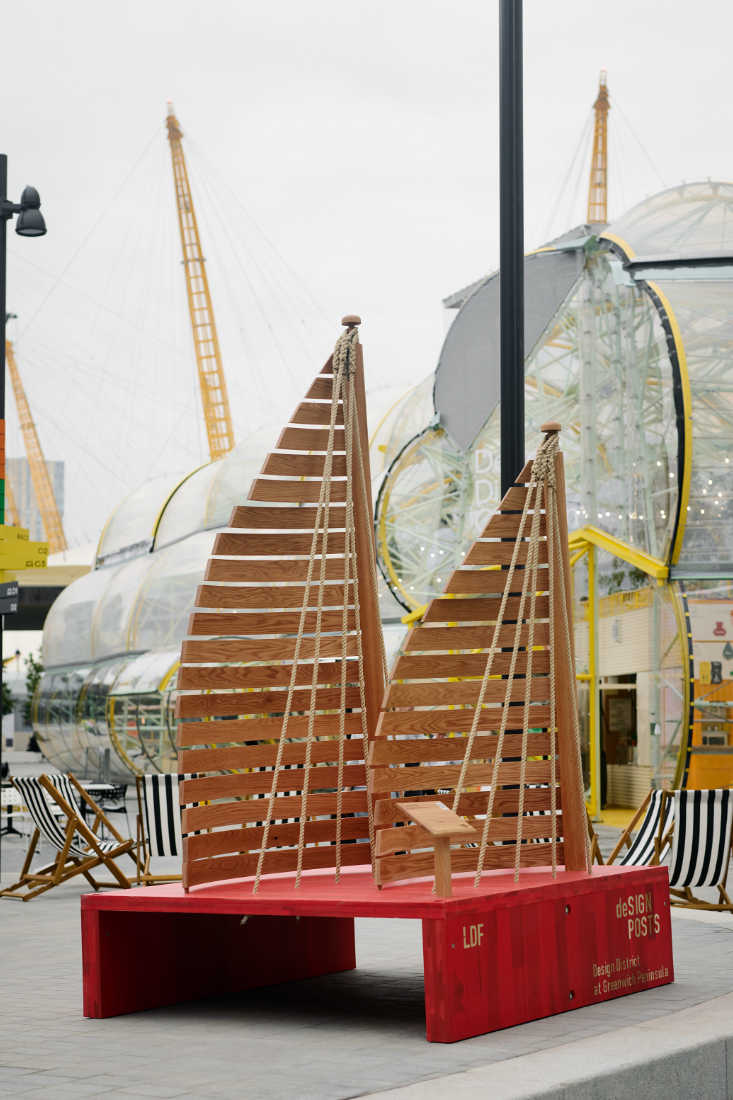 Inspired by the moonlight towers used to illuminate the city in the late Victorian era, this Designpost is a tribute to Brompton’s museums and the socio-cultural history they represent, as well as the vibrant contemporary reverence for craft by the district. The twin piers that rise as a structural frame reveal the beauty of craft in its smallest details; from traditional mortise and tenon joint connections to the tessellating skin of panels that give the structure its form. The entire structure is made to permeate and diffuse natural light, much like the moonlight towers of the Victorian era once did. 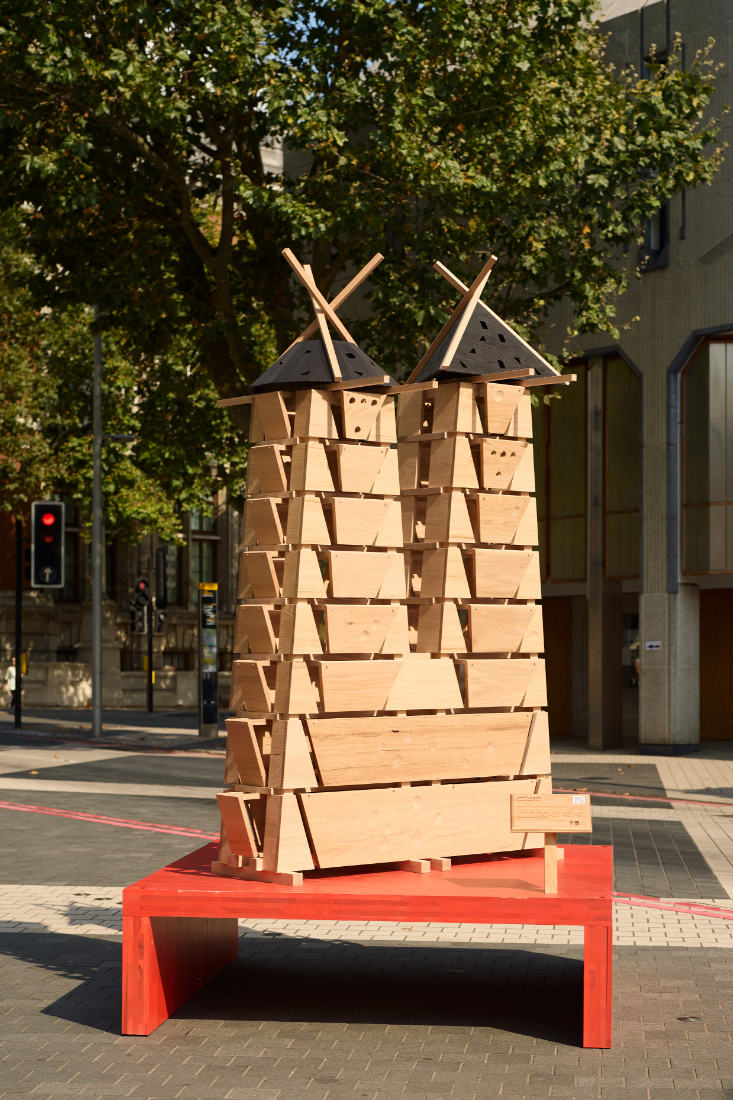 The form of this Designpost’s structure explores the historic relationship of the Clerkenwell district to water, with each plinth representing a different strand of history beginning with the district’s origins in the 1100s as a ‘Clerk’s Well’ – a source of water used by monastic houses beneath what is now Farringdon Road. The design is presented as a large 3D jigsaw revealing hand-turned and digitally machined depictions of industries and events related to water in Clerkenwell. The lower section of the sculpture focuses on the water table produced from 98 painted wooden tiles in five different shades and the geometric ‘river’ that doubles as seating nooks and coffee tables. 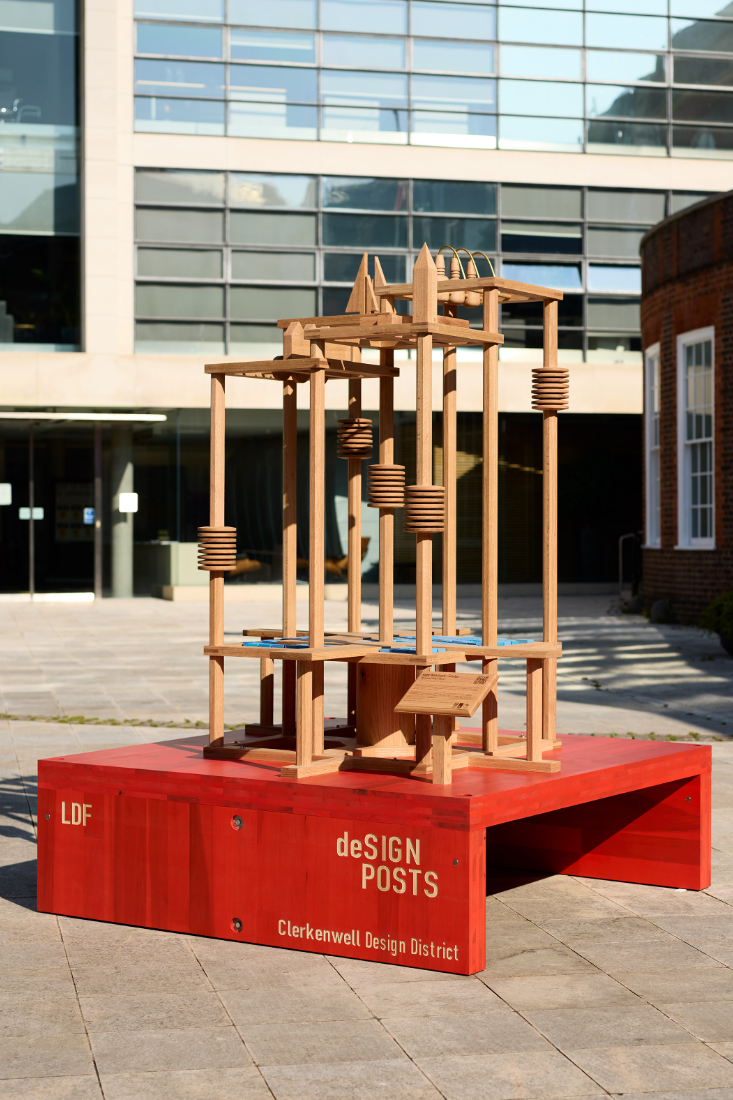