HASSELL brings history and hospitality together in a new kind of coworking space – one that uses warmth, class and high-performance design to deliver five-star results. 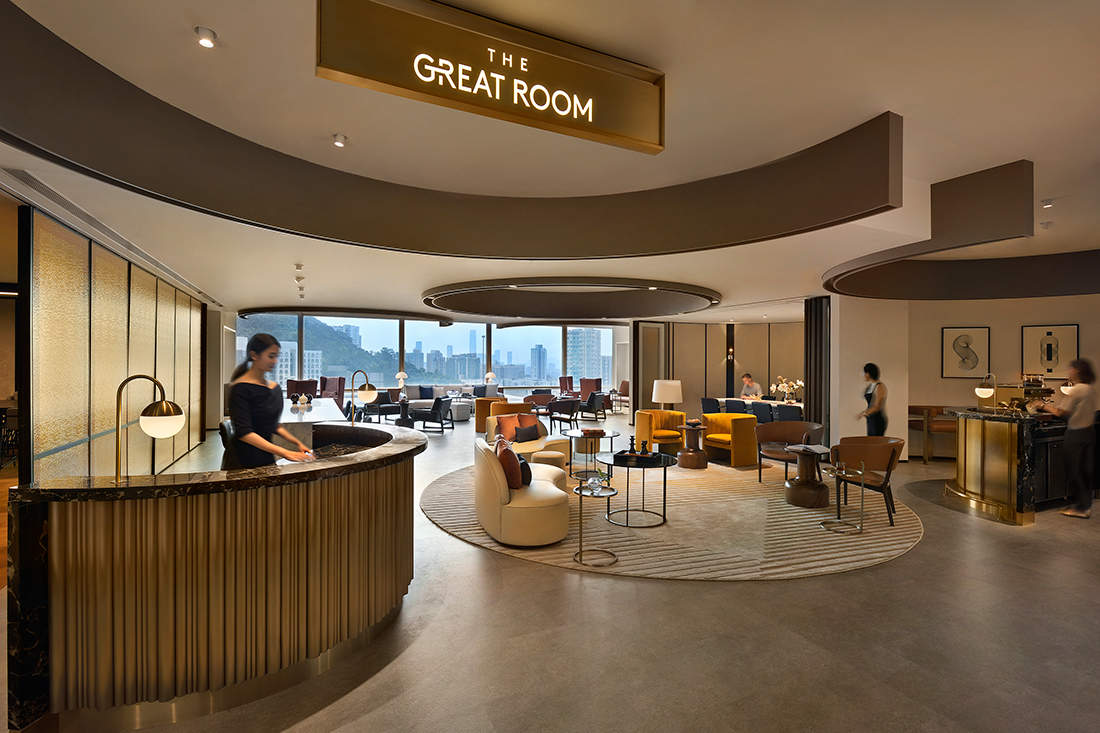 For Jaelle Ang, coworking group The Great Room (TGR) began with luxury hospitality – a perspective that continues to define the brand as it launches its first space in Hong Kong, in One Taikoo Place. This is the second time the group has ventured outside of Singapore (the first was Bangkok), where they have been expanding at pace, and it brings a level of sophistication to coworking in the SAR.

With Ang’s background as an architect – and banker – working with high-end hotel groups, it’s no surprise that TGR’s muse is the Four Seasons. “Four Seasons is one of the few hotels that has a relentless focus on one brand, and they do it well,” says Ang, who is TGR’s CEO and Co-Founder. “Luxury hotels like the Four Seasons are particularly good at driving performance; there’s a rigour and a robustness to the build, but at the same time, it’s not cookie cutter.” To achieve the “Four Seasons of coworking” vibe she was after in the Hong Kong space, Ang looked to HASSELL, and in particular to Matt Shang and Paul Semple and their team. “They have done Manhattan bar, Atlas bar, a few Great Rooms,” she says. “Now, we have a chemistry and a relationship. For Hong Kong, we wanted someone who understands that a workplace has to be high performance. It needs to have technology and storage. It’s a lot of the boring stuff, but it’s the engine. These things have to work for you to layer on the look and the feel.”

For this Great Room, HASSELL drew inspiration from the Hong Kong context, as well as from the sugar refinery that historically had its home here in Quarry Bay. “Our starting point was to bring to life the style and warmth that is inherent to The Great Room, but make it relevant to the context by bringing a sense of Hong Kong’s ‘busy streetscapes’ into the space,” explains HASSELL Principal Matt Shang. He continues, “We achieved this by carefully selecting materials and custom furniture with tobacco, caramel and burnt sugar tones that are both relevant to The Great Room’s brand but are also locally sourced and crafted.” The old sugar refinery – as well as the dramatic mountain- and cityscapes on view at TGR – also informed the space’s large volumes and the sweeping arcs that run across the ceiling in the central space, the Drawing Room. Taking a cue from photographs of the factory’s vast arches, HASSELL used the arcs delineate the different zones of the Drawing Room. Says Shang, “The larger-than-life curves on the ceiling of the main Drawing Room throw the old ‘power lobby’ look.”

There’s the bar, where members can perch while they work or chat, there’s the kitchen, complete with a Rocket Milano espresso machine, there are various living room-style settings, and a main seating area that is the centrepoint for talks and panel discussions. Leather-wrapped door handles on the sliding timber frame doors further amplify the narrative of the industrial heritage.

These are part of what give the Drawing Room its wow factor, bringing it all together to create the ‘hero moment’ for anyone entering the space from the lift lobby. “The Drawing Room is always the heart of the house. It needs to help you make that great first impression,” says Ang. “It’s about enhancing the high-value part of business interaction. We go through all our spaces with this mindset, to make sure our members are able to do that as easily as possible.”

“The larger-than-life curves on the ceiling of the main Drawing Room throw the old ‘power lobby’ look.”

In order to have that same effect in the rest of TGR, HASSELL created a sense of formality in the spaces and the sequence. Strong, masculine sofas and armchairs in leather and luxe fabric, paired with black marble, wood and brass, original art and rugs in place of the more corporate carpet tile, also maintain that hotel-like warmth throughout.

Says Shang, “With diverse zones for different work styles and activities, The Great Room aims to attract a diverse mix of enterprises and ‘grown up’ startups, with the design being multi-functional, reconfigurable and adaptable to change as the community grows. We ensured that the space would be able to support seamless interactions and incorporate aspects of touchdown and coworking.” Lighting also has a strong hand in setting an intimate tone – and a flattering one, too, thanks to the efforts of lighting consultant Inhabit. Says Ang, “We work with a lighting designer who has worked with hotels like Aman and Four Seasons. We always have lighting at different levels – otherwise all you get is light and shadows. Humans aren’t grey.”

It’s the human experience that matters most. Says Shang, “The human-centric design and hospitality amplifies the high value interactions in the various spaces – whether it’s creating the lasting first impression or high impact off-site.”

Everything at TGR has clearly been painstakingly thought-out – from the lighting right down to the boardroom’s strategically positioned side door. “This lets people enter and serve drinks without disturbing a meeting. We believe in coffee fast and with a smile. It’s never accidental. It’s not orchestrated; it’s a science,” says Ang.

This same level of subtlety comes into play with technology at TGR. “Really good tech should be invisible. It enables things to happen, and it allows more human experience to happen,” says Ang.

“There hasn’t been a coworking space delivering at this level in Hong Kong.”

A case in point: the card readers on the sleek doors to the private meeting rooms and private offices slide quietly open when necessary. “We were initially told that, if we wanted these card-activated doors, we couldn’t have them sliding,” says Ang. “We had to custom-manufacture and prototype them until we got it right.”

When woven together, it’s all these small details that make TGR feel like a well-oiled machine. It delivers a certain level of service and quietly without fuss. There’s something reassuring about working here – it feels familiar… rather like being in an efficient and beautiful luxury hotel.

“There hasn’t been a coworking space delivering at this level in Hong Kong,” says Ang, who acknowledges that it’s a challenging market. “A lot of the naysayers said there’s no room for our product in the market. But what’s more fun than doing it when everyone’s said you can’t?”