Go With The Flow: The Winners Of Designing Resilience In Asia International Competition 2018

Launched in 2014, Designing Resilience in Asia (DRIA) is a research programme on urban and architecture resilience initiated by the School of Design and Environment of the National University of Singapore (NUS-SDE).

DRIA aims to promote and foster research and discussion about ideas towards the resiliency of Asian cities responding to the effects caused by climate change. In 2015, DRIA launched an international symposium and design competition in Singapore that has since become an annual tradition.

Each year DRIA invites experts on resilience to share their insights in the symposium and students from an international pool of affiliated architectural schools to participate in the design competition.

The 2018 edition the international competition took the theme of Drowning By The Sea: Re-envisioning the Future of the Chao Phraya Riverfront to Mitigate and Adapt to Climate Change Effects. 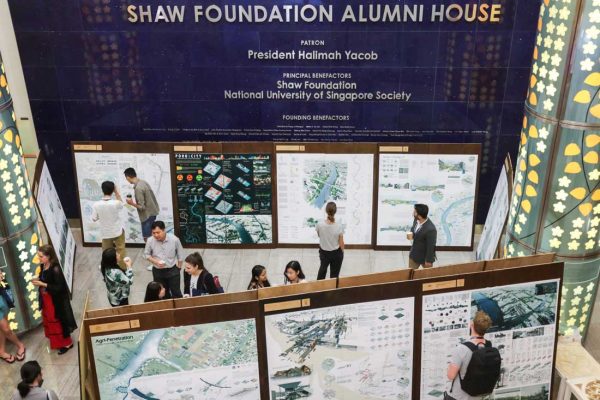 It invited schools to submit design proposals of revitalisation and transformation of Bangkok’s Chao Phraya riverfront. Bangkok has been suffering perennial flooding and land subsidence caused by climate change and rapid (and often unchecked) urbanisation.

Despite being fortified by walls, the riverbanks of Chao Phraya are some of the areas most severely affected during flooding episodes. Specific areas for intervention were determined by each participating team within a larger area specified by DRIA.

In addition to addressing the flooding and land subsidence, the proposal must also proactively address energy production and use, ecological health, sewage overflows and green shipping while taking into accounts the site’s existing urban tissues and other assets both tangible and intangible. 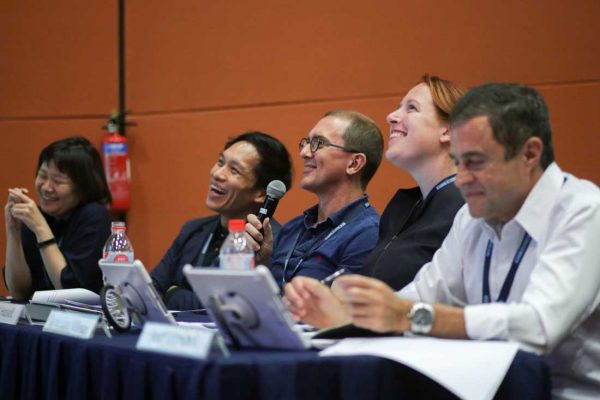 DRIA 2018 jurors at the judging session

And this year’s winning proposals are: 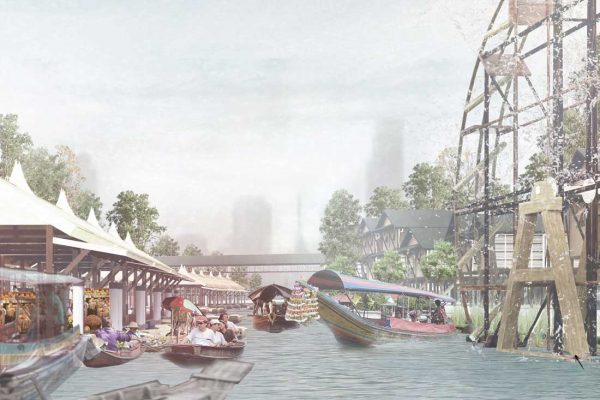 Liquid Bangkok offers a spatial approach centred on Bangkok’s blue system – its canals. The proposal aims to change Bangkokian’s perception of the city’s canals with participatory design workshops. The outcome of the intervention includes a floating market, incremental housing projects and sky bridges. 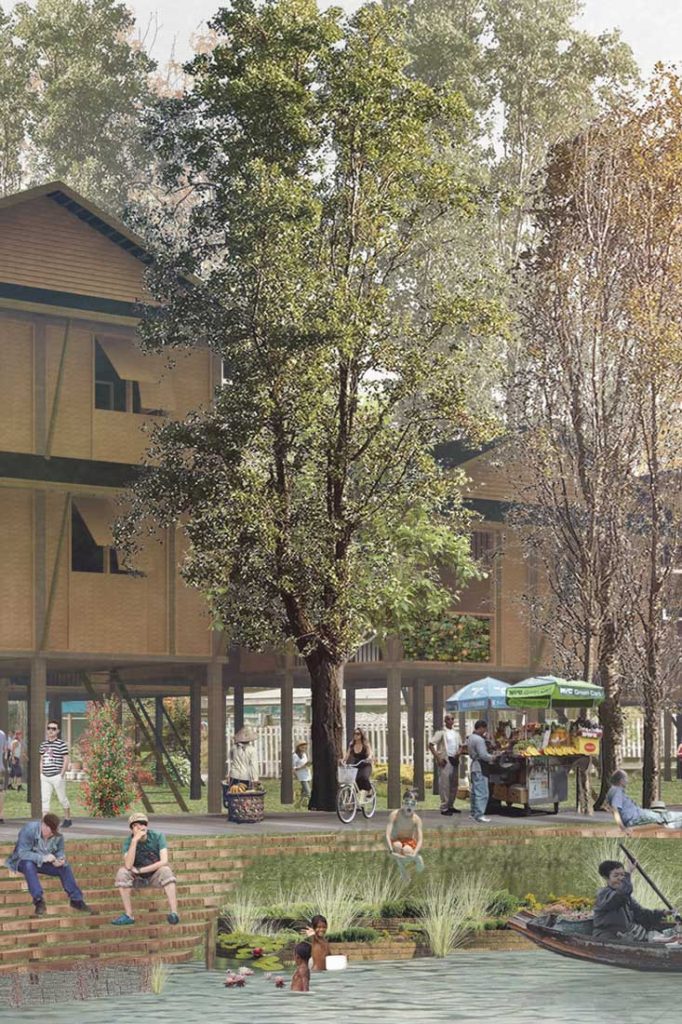 “ITB-A’s presentation on Liquid Bangkok combined a clear problem analysis, a comprehensive set of solutions at different spatial scales, and well thought-out time frames. The jury felt that it portrayed integrated solutions that incorporated both urban design and architectural elements.”

By National University of Singapore (NUS) Team A 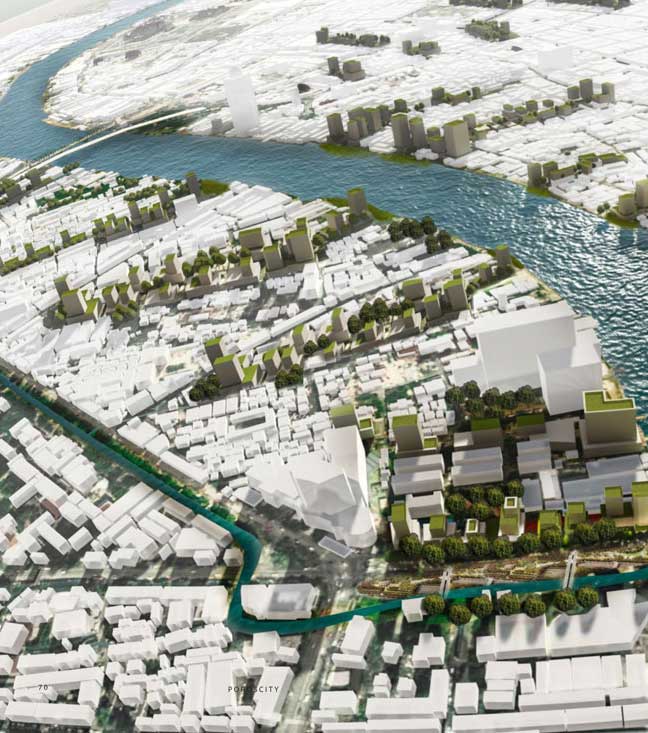 Poroscity sees Bangkok’s many soi (alleys) and khlong (canals) transformed into pedestrian-friendly thoroughfares fostering public interactions and economic activities which can passively help to reduce the impact of floods. 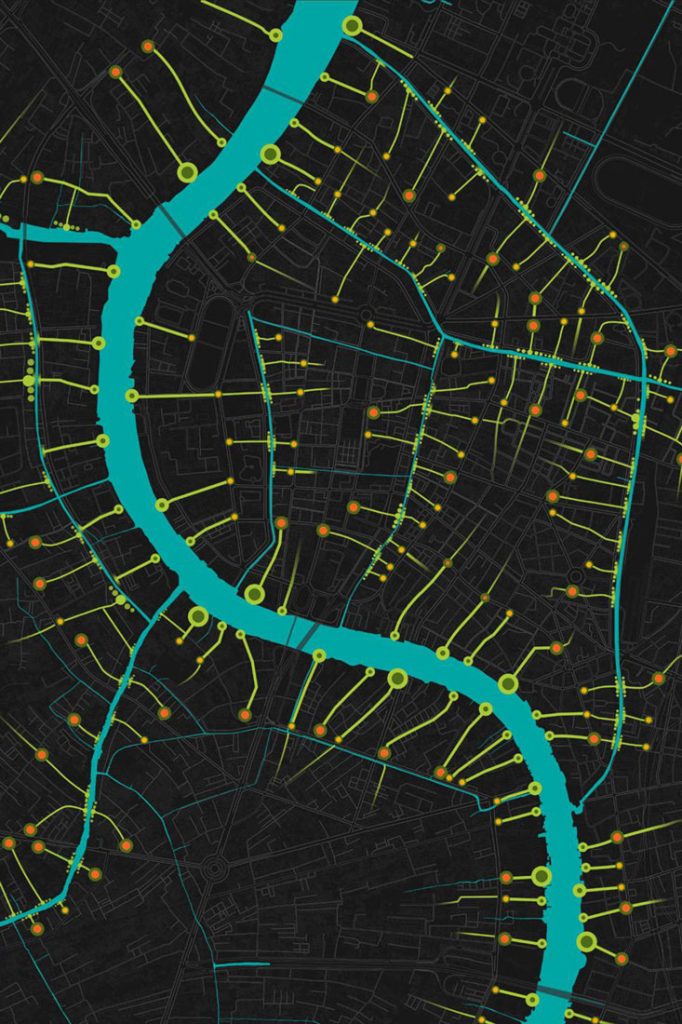 “This scheme presented good ideas for how Bangkok can develop incrementally over time to address both flooding and growth, and how vernacular solutions can inspire developments of an appropriate scale to a megacity of 10 million inhabitants.” 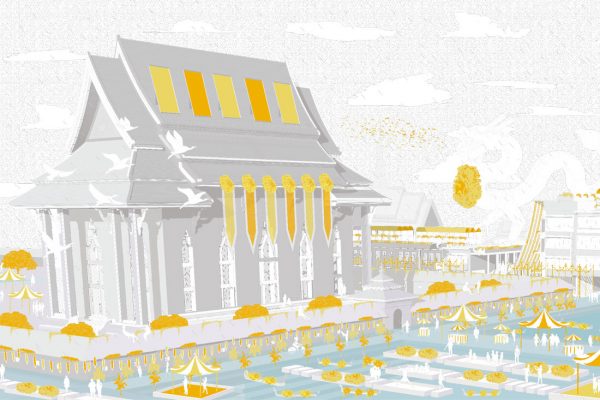 NCKU Team A likens the Chao Phraya River, its irrigation channels and canals as inflorescence (a group or cluster of flowers arranged on a stem that is composed of a branch or a complicated arrangement of branches), with the land as the blooming flower, 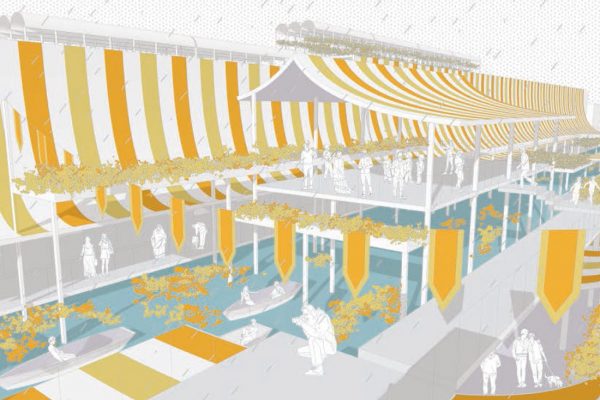 The Inflorescence proposal seeks to connect Bangkok’s two informal seasons: the festive flower season and the flooding season. The proposal imagines the river bank being converted into flower fields with a complex irrigation system that channels the heavy rainfall and minimises the threat of flood. 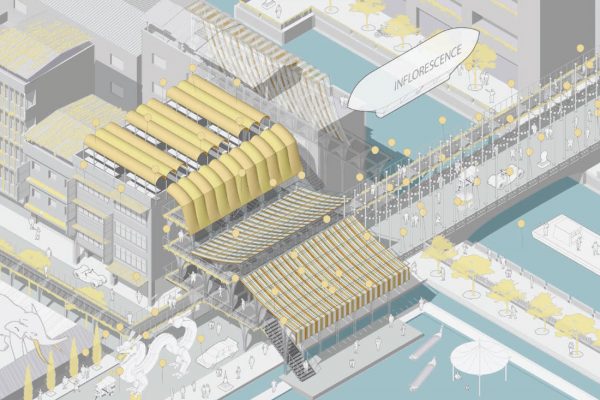 “The analyses showed a smart match between the flood and flower seasons. We loved the positive energy that the images and presentation breaths in an attempt to create a more positive association related to flooding, that well fits the Thai spirit.”

NCKU Team B takes an agricultural approach with Agri-Penetration. Centred around the effort to boost the value of the agricultural industry, the intervention offered by the proposal includes using the topography to irrigate new agricultural areas and packaging the whole process and experience for tourism. 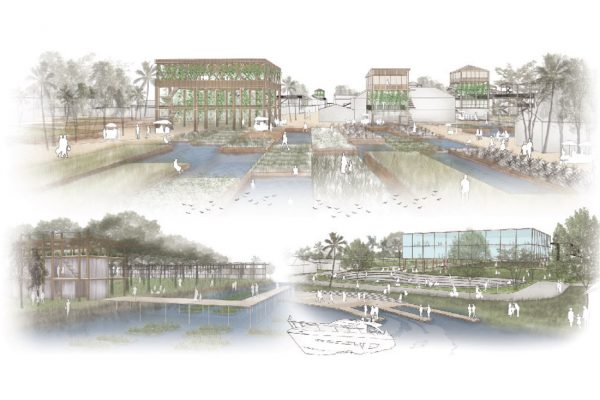 “The proposal demonstrates the potential for promoting the agricultural land as part of an Asian Metropolis’ urban fabric. It serves not only as a productive contemporary landscape but also as a water mitigation tool.”

WAT.Er: Redefining Wat as a Centre of Resilience 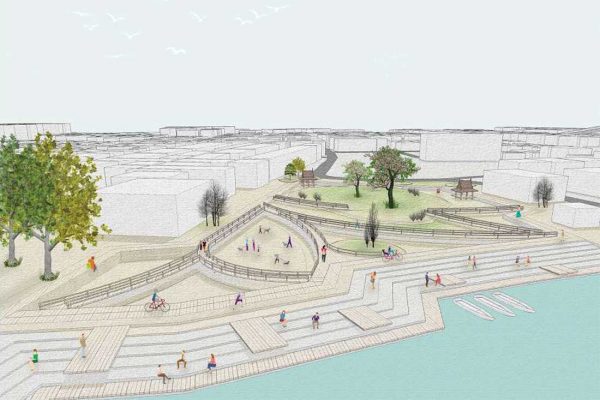 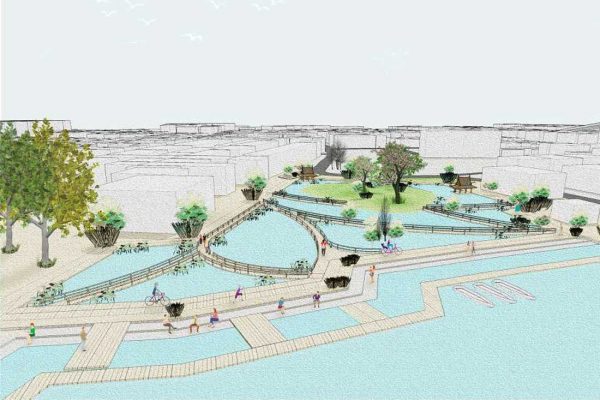 Praised by the jury as a delightful surprise, ITB Team B’s Wat.Er proposal places the site’s many Wat (temples) as the centre of the development. Wat.Er’s proposed intervention includes redeveloping the Wat in the Kadeejen Khlong San as a huge water reservoir and a shelter for people during a flood. 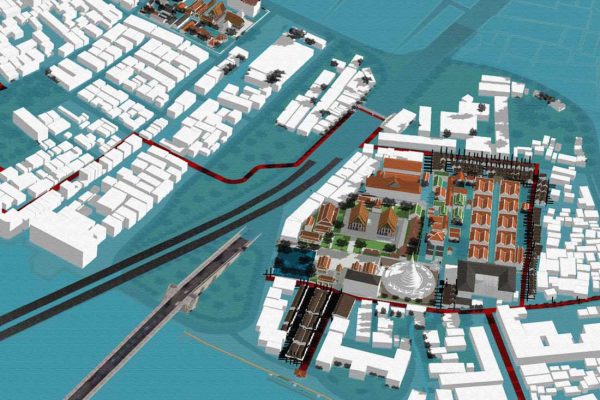 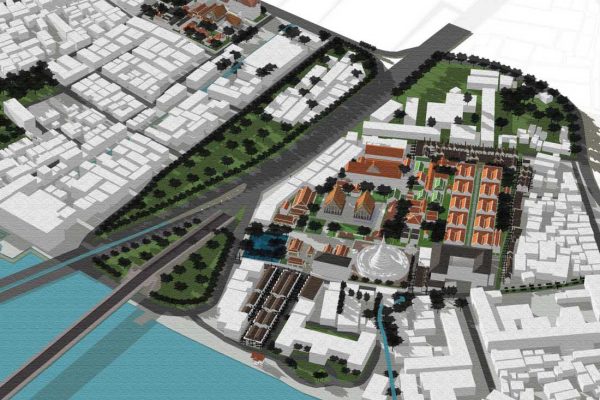 The proposal takes inspiration from the Buddhist’s tree of life (the Bodhi tree) concept and likens the site to a Bodhi tree and the Wat as the root that absorbs and store rainwater, gives the area its cultural character and revives the tourism. 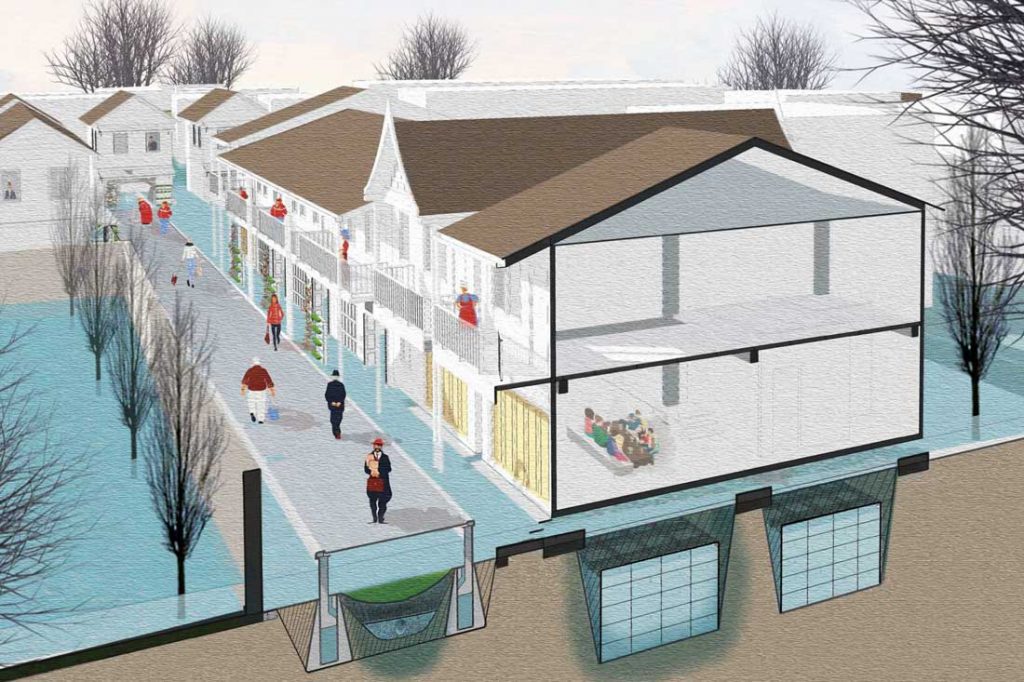 “Using a clever analysis of land use, the team proposed a creative solution that was also culturally sensitive in its use of the Bodhi metaphor, The jury found that this solution was simultaneously feasible and embraced innovative technology; it has a high potential for replicability throughout Bangkok.”

By Royal Melbourne Institute of Technology (RMIT), Australia, Team A 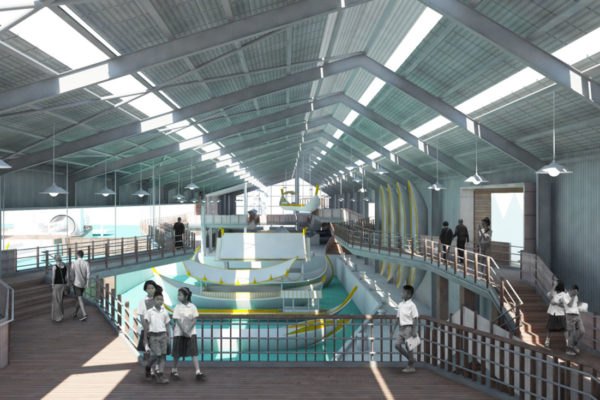 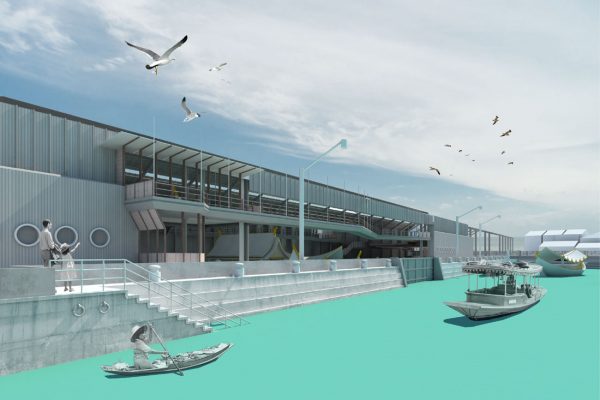 The ultimate aim is to re-condition the riverside urban fabric using the link as an armature and catalyst to stimulate and support new urban activities and connections. 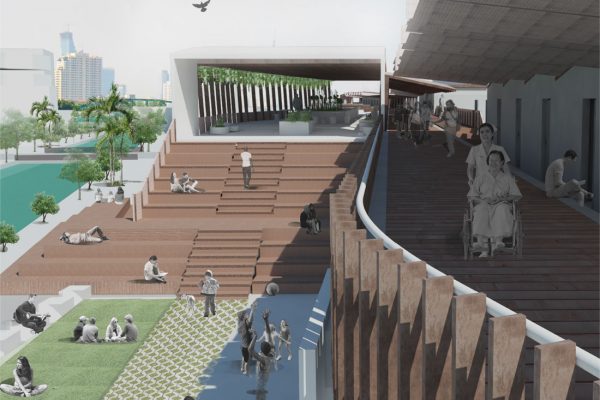 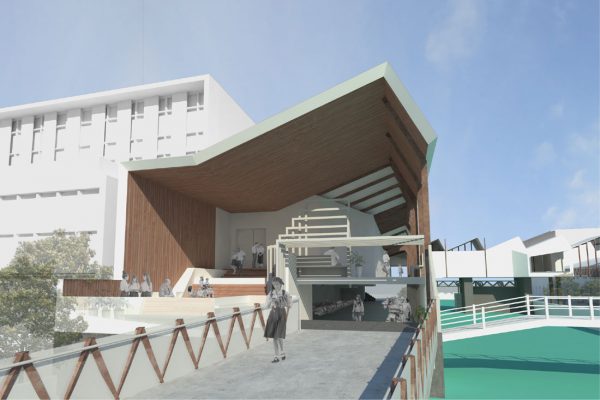 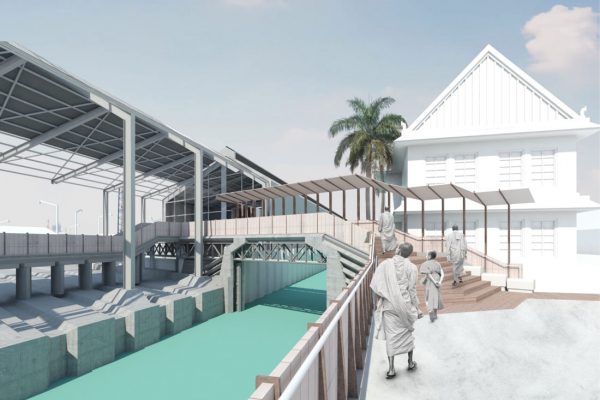 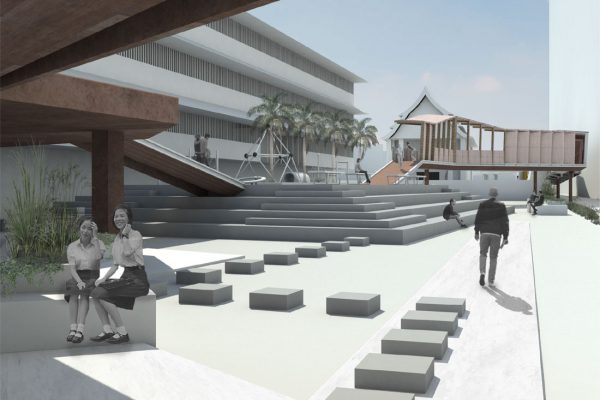 “The plan showed a thorough understanding of how to translate a regional flood risk strategy into a local scale architectural design.”

By Centre for Environmental Planning and Technology University (CEPT), India, Team A

CEPT Team A’s proposal aims to rejuvenate the relationship between Bangkokians and its water by integrating water sensitive systems to public spaces with four strategies: Rejunevate, Soak, Protect and Adapt – each responds to different flood level.

The proposal was praised for its comprehensive regional, city and local analysis of the issues and its “clearly structured toolbox of interventions”. 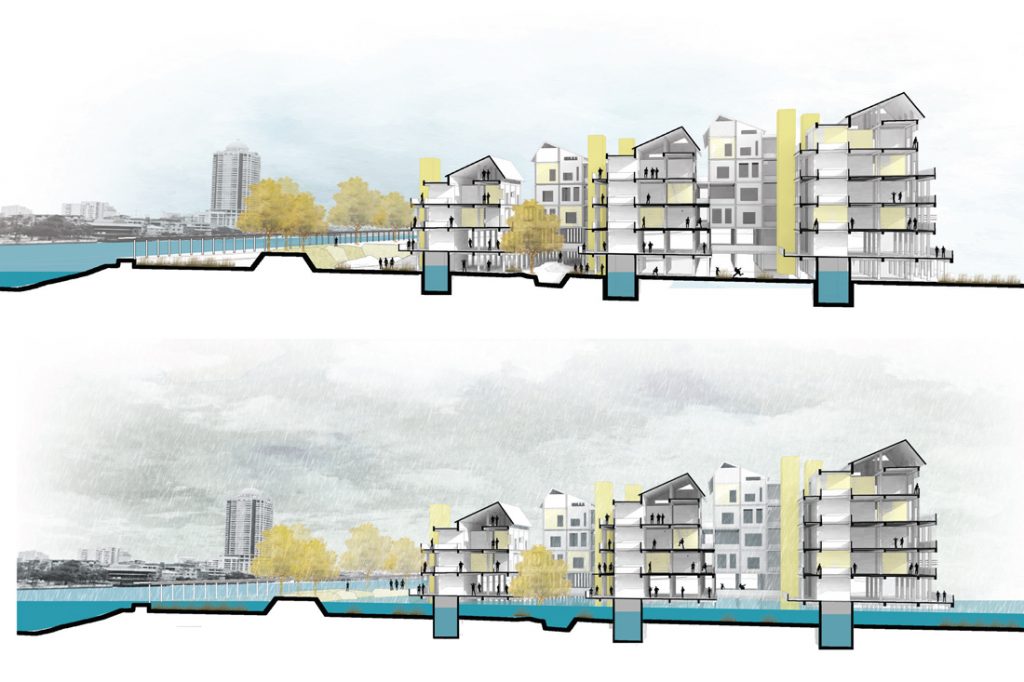 “A variety of typologies and scales enabled sensitive solutions in the diverse urban fabric of the city, and it was one of the only schemes to address sewerage as well as transportation and water.”

“The site is quite big, it’s seven-kilometre-long riverbanks, which is probably the biggest challenge the teams found. The students struggled to give solutions at such a large scale because architecture students are not used to doing that. But I think they did an extremely good job,” comments Prof. Oscar Carracedo Garcia-Villalba, Assistant Professor and Director of the DRIA International Research Programme.

He elaborates, “The capacity of these proposals to point out some of the main problems was quite diverse. Some teams focused on flooding, some on post-disaster solutions, some on preventative solutions, some on CO2 emissions, some on mobility. We had many diverse solutions because of this difficulty in trying to solve all the different dimensions of the site. I think this is the probably the most exciting outcomes of the competition.”

Lookout for a dedicated post on the DRIA 2018 Symposium!

All images courtesy of DRIA.