From the Curated Space at red dot design museum to a bubbly display at Duxton Road, the Tanjong Pagar-Pink route offered lots to see and do.

From the Curated Space at red dot design museum to a bubbly display at Duxton Road, the Tanjong Pagar-Pink route offered lots to see and do.

Last year’s curated space was a huge crowd favourite but this year, things were taken up a few notches and here’s why. For one, the red dot location was the launchpad for new Australian designers and brands. Taking significant space out front under the Quench collective, Alexander Lotersztain (director of Derlot), Jason Bird (of Luxxbox) and Bjorn Rust (co-founder of Snack On) were here to meet the design community and share their latest work. Rust even served up coffee from his latest coffee making product to show visitors just how well it worked. Further in, Create Stone from Australia made its Singapore debut with the launch of two new tile products while Sydney-based Thinking Ergonomix gave visitors no less than 5 new designs. Stylecraft was also there with a specially curated space designed by Distillery – a colourful set-up displaying the latest products from Arper, Derlot Editions and Tacchini, and featuring the debut of the Ritzwell brand from Japan. Just as colourful was the fabric printing demonstration on tote bags at the Korla stand, which were given out free to the eagerly waiting crowds. Still on textiles, Deco Expression made an impression with its introduction of highly innovative Vorwerk carpets from Germany, while Bode and Vantage Concept captivated visitors with their diverse mix of fabrics, carpets and more from brands such as Timorous Beasties and Tsar Carpets. Small ones weren’t neglected. There to show its study systems for children were the folks from Ergokid / Moll. And to demonstrate their creativity, the designers from MINUS created a sculpture using 12,000 pages taken from old copies of Cubes magazine (top image). From the Curated Space, visitors who journeyed down to the Kokuyo showroom were met with bubbles blowing out into the street. The dreamy, whimsical show continued inside with some 1,000 acrylic bubbles inspired by the Airgrace chair and the lightweight Cheche Midi, which weighs a mere 960g. 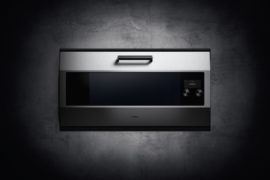