Herman Miller’s annual award highlights workspace design that is setting new standards around the region. Here is a round up of this year’s winners. Top image: The winners of the 2016 Liveable Office Award

The ideal workspace of the 21st century is agile, it’s creative, it’s innovative and it’s talent-focused – and it is exactly this kind of space that the Liveable Office Award is all about.

Held on 19 May 2016 in Hong Kong, the independent award was first instigated by Herman Miller’s Asia Pacific team. The internationally renowned furnishings provider established the Liveable Office Award to raise awareness of what great workspace design looks like, in a bid to improve the organisational goals companies set themselves, and to improve employee health and wellbeing. Each of the jurors rated the spaces on the basis of five criteria. These revolved around how well the workspaces built corporate culture, enabled focused work in an open space, supported various forms of collaboration, provided a health-positive working environment and demonstrated environmental responsibility. Singapore’s Siren Design Group won the Liveable Feature Award – Best in Tech, in recognition of its outstanding body of work in designing spaces for tech companies. For this year’s awards, they submitted offices designed for Facebook, Twitter, and JustCo @ Robinson Road. “They are designing their offices not to look like offices,” says Mia Feasey, CEO for Siren Design. “At companies like Intel they’re a lot more regimented, because it’s about protocol. They’re still about the people, but there seem to be more boundaries than the software and social media companies, which are a lot more tactile and human,” says Feasey.

“I think it’s now paring back a bit,” she continues. “Google had a car upside down on their roof. Now, a lot of the corporates don’t want to be so corporate. It’s coming back to something semi-residential, more comfortable.” In addition to designing for tech companies, Siren Design is increasingly involved in creating co-working spaces. “The people that are taking up those spaces are new apps, new tech companies. They want that startup look,” says Penny Sloane, Siren’s Singapore MD.

It’s exciting times for Siren Design, and they are thrilled to win the Best in Tech Award. “As a company we are only 10 years old. We started from nothing; doing warehouses, offices attached to toilets, lift lobbies. To now be Best in Tech in 2016, it’s pretty exciting,” says Feasey. Also honoured with a Liveable Feature Award, the Transform Asia Award, was DWP Interics, founded by Phillip Chako and Ashok Prabhu. DWP Interics won the award for the 1 million-square-foot office they created for India’s mobile and digital giant, Reliance Jio. “Our biggest challenge was to get rid of their closed cabin system,” says Amit Handiekar, Associate Director at DWP Interics. “Now everyone from management to staff sits at open workstations.”

Reliance Jio has a presence all over India, and this was something DWP Interics wanted to showcase in the new office. “Each state has its own culture, and we translated this into different areas and in the colours of the workstations,” says Handiekar. “The architecture, the street culture… all that comes through in the collaborative areas,” says Shailesh Kunte, Associate Architect with the firm. They dismantled a Mumbai taxi and turned it into a meeting space; there are shacks and a bamboo ceiling in the Goa area, and much more. “We love to work with clients who really challenge us,” says Kunte. “It brings out the best in us.” 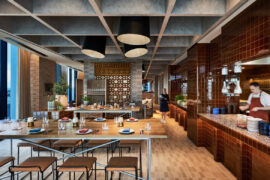