The first large-scale solo exhibition of Tokujin Yoshioka’s works is currently on show at the Museum of Contemporary Art Tokyo (MOT). Alice Blackwood makes a side trip to Tokujin Yoshioka_Crystallize. The sound of white is silence: ear ringing, retina blinding silence, tinged with a sense of euphoria.

It’s a feeling that I haven’t found replicated anywhere but in Tokujin Yoshioka’s work, which often manifests as full room installations that engage space, structure and nature to create sensation and experience. An artist, architect and designer, Yoshioka moves beyond the boundaries of discipline in his attempt to create real, living experiences from natural elements such as light, water and rock. “These days people are able to see situations from all over the world through screens [from the television and computer]. Although it is interesting, there is a lack of experience,” says Yoshioka. “Then, what is experience? I still do not have a clear answer for this” – and herein lies his vocation. In his first large-scale solo exhibition, entitled “Crystallize”, Yoshioka investigates the possibilities of crystal when combined with elements such as light and sound. Among the major works on show is Swan Lake, a five-year experiment growing crystal forms into large-scale ‘paintings’ which almost defy gravity as they hang like heavy, thorny masses from the gallery walls.

What is astounding in these pieces is the energy they exude, the natural crystal forms shaped into sharp spikes and organic rocky nodules by the vibrations of Tschaikovsky’s Swan Lake, which plays to them as they grow. How is it that Yoshioka has taken nature and energy and transformed a piece of music into a canvas?

“Nature may not actively produce beauty,” says Yoshioka, “but it is filled with energy to create it.” Thus Crystallize, for Yoshioka, is the “creating of works from crystallizing the energy of nature.” From left to right: Rose and Spider Thread

Even more astounding than Yoshioka’s Swan Lake crystallized paintings is the Rose, literally a crystallized flower, the subtle pink blush of the petals absorbed into the crystals during the growth process. From painting to form to architecture, Crystallize also encompasses Rainbow Church, a stained glass window stretching from floor to ceiling within the basement recesses of the MOT. The long, shaft-like window is composed of 500 crystal prisms which, when hit by light, converts these natural rays into rainbows of “miraculous light”.

The exhibition also contains Yoshioka’s Honey-pop chair, formed from 120 sheets of paper; and Spider’s Thread in which Yoshioka ‘sculpts’ a chair from crystals, grown upon 7 structural threads. Not to be forgotten is his blinding white Tornado, which manifests as towering mounds of silent white straw that sit like snow drifts within the confinement of the exhibition space.

While it’s a relatively small exhibition (as far as retrospectives go), Yoshioka’s re-sculpting of nature with the human hand is truly magical.

“Forms of works generated from nature go beyond our imagination,” he says. “They take their own figures by reacting with nature and its hidden energy.” This is the very aspect that has the power to move “our heart”, says Yoshioka.

And this, he says, “is the liberation from the concept of formation and techniques. And there exists my answer to the future.”

Tokujin Yoshioka_Crystallize runs until 19 January 2014 at the Museum of Contemporary Art Tokyo (MOT). 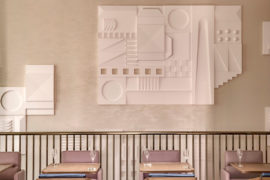