Coming To A Highway Near You

Electric cars could become standard with the help of this new technology from HaloIPT, writes Sam Eichblatt.

Tech company HaloIPT is investing in the long-term adoption of electric vehicles over standard cars by creating lighter, smaller and faster charging technology — which it hopes to eventually roll out across highways, city streets and parking lots across the world.

The technology — Inductive Power Transfer — was initially developed in an Auckland University laboratory, and allows vehicles to charge while parking or driving over a doormat-sized plate in the ground. It aims to replace the battery and charger units currently in use for private electric cars, which take around 7 hours plugged into a 15-amp socket for a full charge.

“At the moment the cars are a bit heavy,” says Halo’s chief executive, Dr Anthony Thomson. “There’s no reason for that, except for the massive battery. It’s like carrying 10 lunches around with you every day, when you only need a little energy at a time. The energy can stay in the grid, and you can tap into as needed.” The company differentiates itself from competitors by offering a smaller unit with more power density.

“It’s helping us in our hunt for new business,” says Thomson. “If we can say it’s the size of a laptop rather than a picnic table, that’s a lot of difference in terms of weight and size.” So far, HaloIPT has worked with companies including Rolls Royce to create the ultimate sustainable, silent Phantom, and UK firm Drayson Racing, to develop an all-electric prototype race car.

It also recently announced plans to partner with Chargemaster PLC on a scheme to develop a nationwide electrical vehicle-charging network for the UK by the end of 2012. 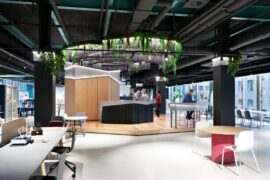