Boardroom of the Future

Designers in the first Merx-Saturday in Design competition offer their vision of how the boardroom of the future will look like. We reveal the top entries.

New workplace strategies and activity based work practices have led to big changes in the way our offices are designed. But as the corporate revolution marches forward, the boardroom – that epicentre of decision-making – appears to be dragging its legs at the tail end of the line.

“We thought it was time to challenge the design community to push the boundaries of this space and challenge where the boardroom will be in the future,” says Will Forwood, Managing Director of Merx, a firm that delivers in excess of 500,0000sqft of corporate office year on year in Singapore. A diverse range of innovative ideas were entered in the first Merx “Design the Boardroom of the Future” competition, which was held in partnership with Saturday in Design, but in the end, it was the daring proposal by Siren Design that most impressed the judges and took home the win of a Merx trophy and $500 cash prize. “The concept by Siren Design was a unique take on a very old idea. It provoked thoughts of elders gathering in an amphitheatre type space and removes the most basic element of any meeting room: the table. The Siren boardroom also considered technology as becoming a three-dimensional communication platform, moving the focus to the centre of the room. We felt that the space kept to the brief of the Boardroom of the Future, and the judges are all keen to explore the idea to make it real!”

Siren’s proposal is based around the concept of Augmented Reality – the live direct or indirect view of a physical, real‐world environment whose elements are augmented by computer‐generated sensory input such as sound, video, graphics or GPS data. It is a ‘no furniture concept’ that includes, among other things, individual pull out media tablets, multifunctional moveable partitions in photovoltaic glass, and a central stage where AR is presented. “The runners-up explored the combination of the virtual with the physical space. They did this by considering the room to be an expression of reaching into different dimensions. This was achieved through the use of mirrors that also act as an intelligent glass material, which we know is being developed.

“We feel Julia and Monthon should be applauded as they capture the judges’ thoughts around the subject of collaboration across companies and connected individuals, knowledge sharing and a reflection of the future of work. They also showed great initiative by entering not via their different companies, but on their own steam,” says Forwood. 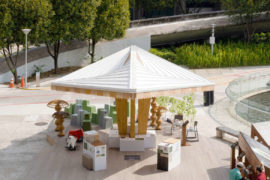