Born in Resistencia, Argentina, in 1943, award-winning architect Emilio Ambasz completed his undergraduate and graduate programs in Architecture at the Princeton University under the tutelage of Peter Eisenmann in just two years – a feat no one else has done before, or since. Following his graduation, Ambasz taught in Princeton for three years before he became a professor. A week after being named as a professor, he quit the job.

An eccentric genius with many interests, Ambasz went on to work as the Design Curator of New York’s Museum of Modern Art from 1970-1976. But he is mostly well known as one of the early champions of green architecture – with a combination of buildings and gardens, which he describes a ‘green over grey’, being the signature of his architectural works. Some of these works are now on display at the URA Centre in the exhibition titled Emilio Ambasz: Architecture Toward Nature. Running from 6 to 28 February 2017, the exhibition is curated by New York-based architectural writer and curator Vladimir Belogolovsky.

Why did you decide to do an exhibition of Emilio Ambasz’s works and why did you choose Singapore as the first stop?

I first met and interviewed Emilio Ambasz in 2007. He said, ‘I will talk to you and later I will give you a list of questions and a list of answers and if you want to publish it you can do it but no notes, no tape recordings.’ A few years later after I did a travelling exhibition of Harry Seidler’s work he asked if I would like to do one for him. I was very excited but he did say, ‘You have been warned, wherever it is, I’m not going so you have to present the exhibition.’ And here I am. I think is a very suitable exhibition for Singapore, as a city with such a rigorous policy to protect nature that it has created a very distinct architectural environment. My connection with the city started last year when I interviewed [Wong] Mun Summ and Richard [Hassell] from WOHA at the Venice Biennale. We kept in touch and I asked them for a suitable venue for this exhibition and they recommended the URA.

What do you think the architecture community here in Singapore can learn from Emilio Ambasz and his works?

When I look at the green architecture of Singapore produced by local architect one side of me is very positive, one side is sceptical. There are real great answers that were found about how to deal with nature – how to bring nature into the city, and I love it. I stayed at Oasia hotel and I think that’s a model that should be repeated throughout the city in different scales and different variations – that works. What I’m sceptical about is the fact that I can see a certain kind of anonymity in this type of architecture. I don’t see individual hands behind this work. It’s one particular approach to bring nature into the buildings and to design around the climates. It is one particular idea and a set of devices as supposed to ideas coming from an individual. How do you now distinguish green architecture by one architect from green architecture by another architect? Stylistically, they are very similar and that’s my problem. If you look at Ambasz’s work – it’s not anonymous – it’s very much associated with his name.

Can you tell us more about the Intercontinental Curatorial Project and the nature of your work as an architectural curator?

I started writing about architecture because of 9/11 and I started doing Curatorial Project because of the 2008 financial crisis. Before that I worked as an architect for 12 years, but every year I would change firms. It helped me to get a cross section view of how this world works. From 2002 I moonlit as a journalist. I was always interested in learning from the best and the main means of that is via interviews. By 2008 it was impossible to find a job in architecture firm so I was thinking what’s next? How can I evolve? By that time I have interviewed about 200 architects so I thought – exhibitions, creating an experience to get into the stream of ideas of these great architects. So I created the Intercontinental Curatorial Project. 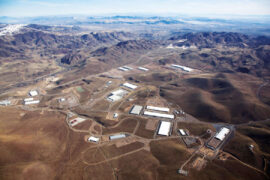