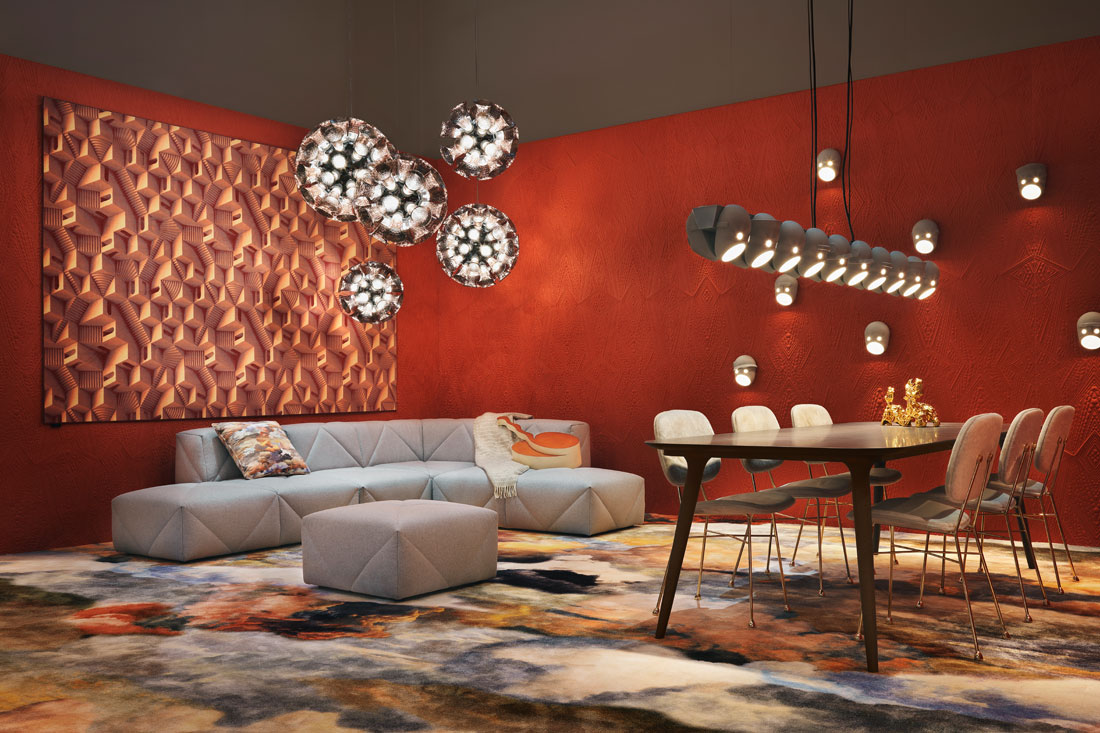 Moooi is well known for its expansive display of newly released and best selling products in the Tortona district during Milan Design Week every April. There were changes to the familiar formula in 2019. For one, Moooi moved its exhibit to the central district, Brera – the heart of Fuorisalone.

Going against the tradition of launching novelties during Milan Design Week, Moooi’s new brand strategy is to launch its novelties all year round, captioned “More Moooi Moments”. The strategy is to create ongoing brand momentum all around the world with what Moooi calls “The Beauty of Surprise”. 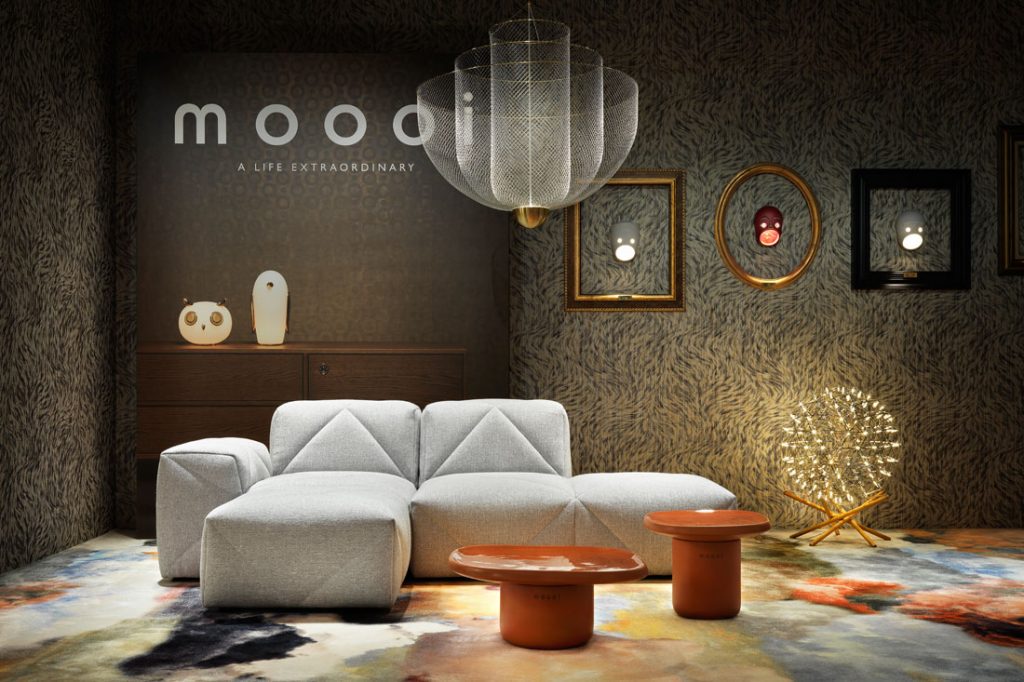 So will the Milan Design Week installation be all about brand experience, rather than the anticipated reveal of the latest offerings? Perhaps, but in the case of Moooi, a thorough and immersive experience has always been part of the brand’s presentation. The theme for 2019 was “A Life Extraordinary”– a rich and colourful setting for the latest and greatest. 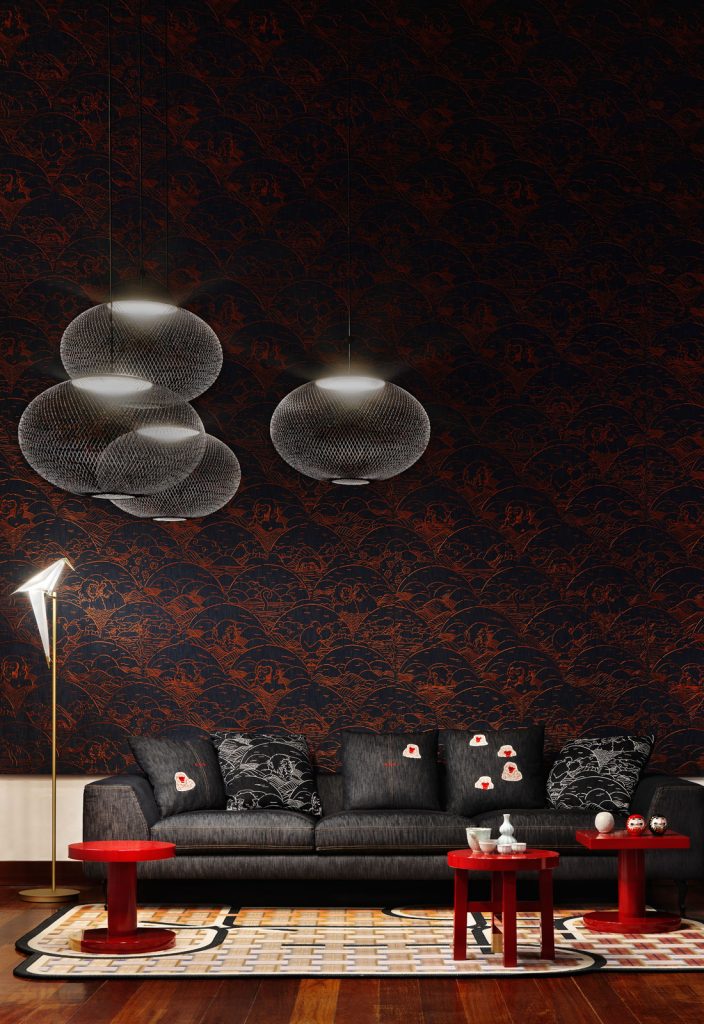 The Indigo Macaque wallcovering (by Moooi and Arte) from Moooi’s Extinct Animals Collection, with NR2 light by Bertjan Pot, the Perch floor light by Umut Yamac, and more.

Just as intriguing was the new cast ceramic lighting collection by Kranen/Gille. Revealed in December 2018, The Party is a family of five characters that were designed to engage our imaginations: the want-to-be aristocrat, the black sheep, the opportunist, the patriot and the evil mastermind. Describes Kranen/Gille, “Fragments of their personalities appeal to our own hidden side, stimulating recognition, interest and curiosity.” 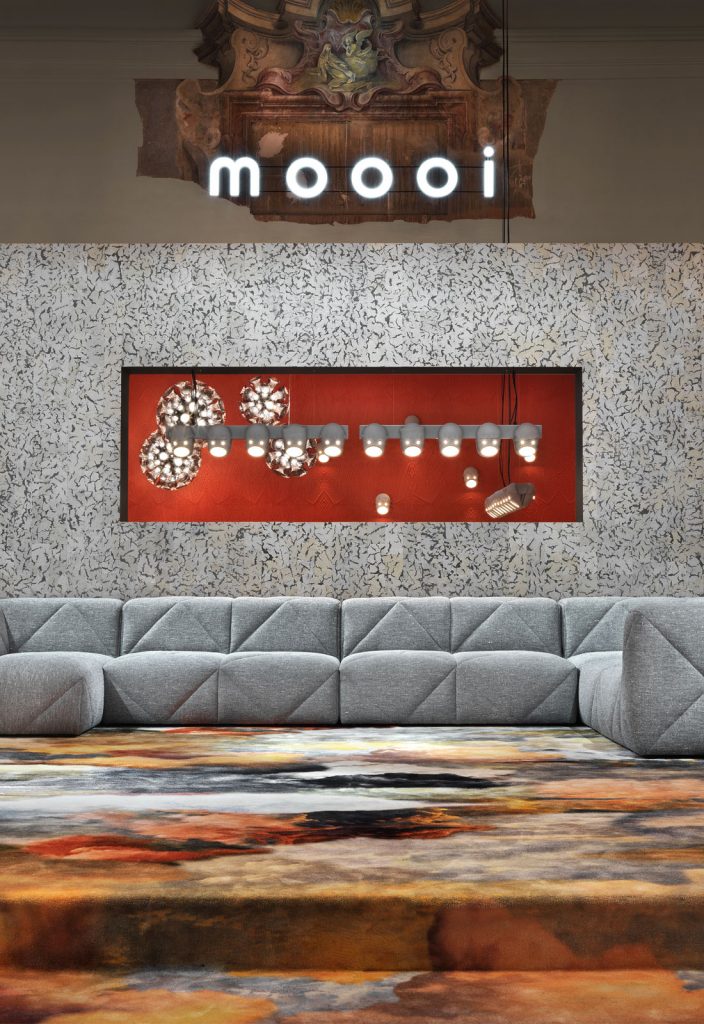 The BFF Sofa by Marcel Wanders was designed with the thought  of simple comfort. Toying with the idea of endless configuration possibilities, the system consists of 17 modules plus a footstool. The quilted appearance of The BFF Sofa was inspired by the capitone technique, known for its characteristic deep buttoned upholstery. Wanders scaled up the diagonal effect so one fragment of the traditional upholstery becomes a module of The BFF sofa.

Inspired by long-lost animals, Moooi presented the Extinct Animals wallcoverings with a new addition: the Indigo Macaque. Bathing monkeys are depicted among scenes of mountains and waves in a composition of intricate Japanese-inspired stitching  on Moooi Tokyo Blue denim. The new wallcoverings (created in collaboration with Belgian brand Arte) complete Moooi’s collection of Extinct Animal fabrics and carpets – an unusual range of designs that depict the fur, feathers and skins of lost creatures, based on archival drawings. 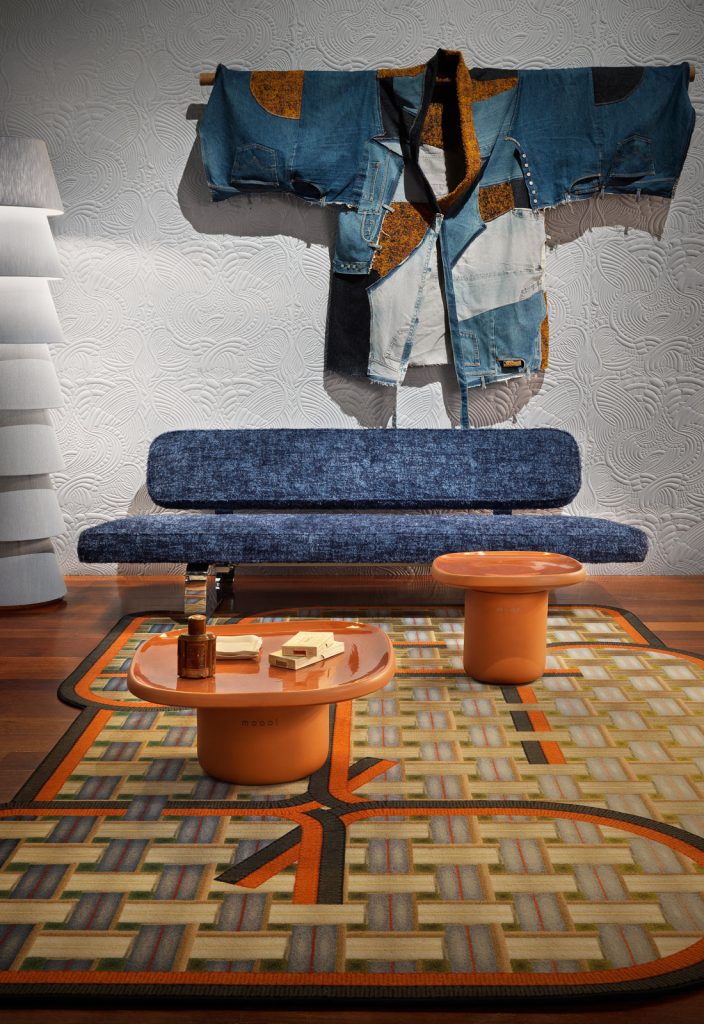 At the time of their launch in Milan, The BFF Sofa and The Party were immediately available for purchase. The BFF Sofa was simultaneously launched in 20 showrooms and Moooi brand stores around the world – a rarity in an industry where there’s typically a months-long wait for the newest items to reach global stores.  Moooi has its finger on the button – in more ways than one.

Also featured in Milan was The Button – a small NFC (Near-Field Communication) device that will accompany every new Moooi design as a marker of its authenticity. The Button can be scanned with an NFC-compatible device (smartphone and/or tablet) and the Moooi app, which can be downloaded from iTunes and the Google Play Store.

This article originally appears in issue #98 of Cubes magazine – Working With Intent.